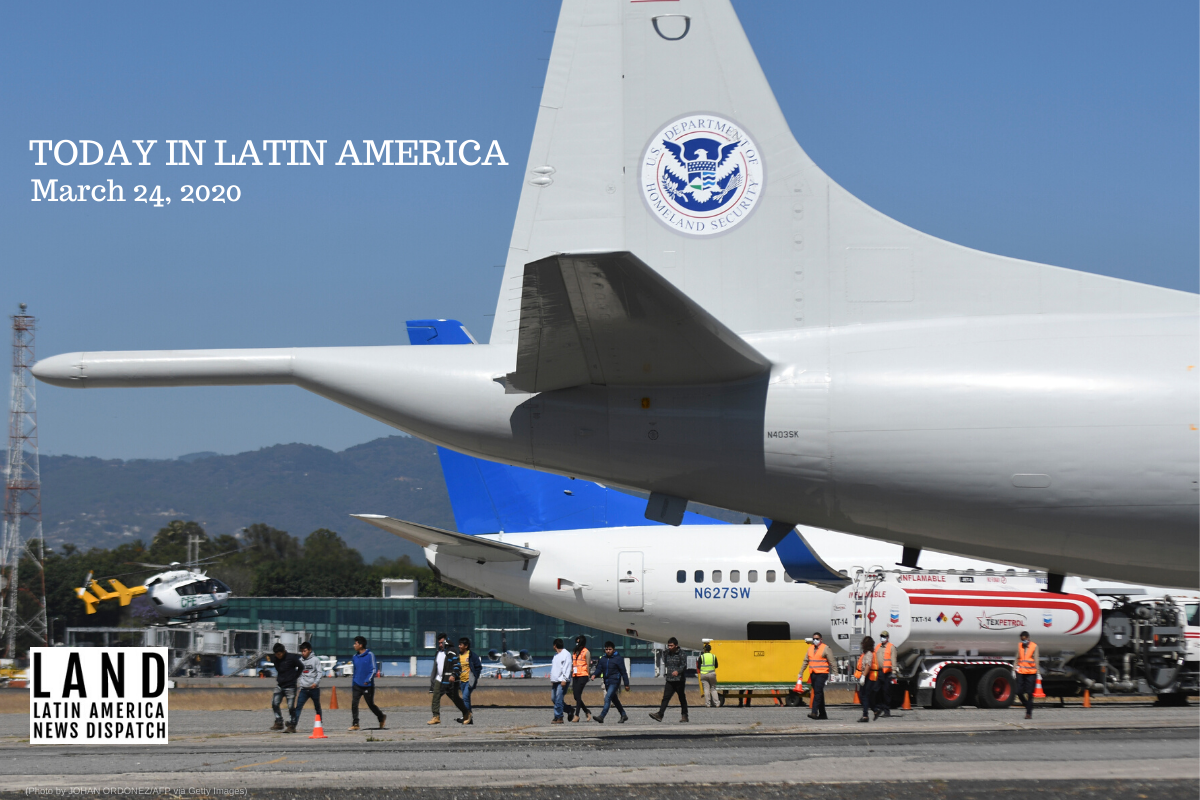 Guatemalan immigration officials use protective equipment as a preventive measure against the new coronavirus, COVID-19, as they receive Guatemalan migrants deported from the United States, at the Air Force base in Guatemala City, on March 12, 2020. (Photo by JOHAN ORDONEZ/AFP via Getty Images)

U.S.-GUATEMALA: Two migrants who were deported from the United States deplaned in Guatemala with high fevers, raising concerns about U.S. immigration policy during the coronavirus pandemic. Guatemala has 20 confirmed cases of COVID-19.

The 85 passengers went through a medical screening after the flight from El Paso, Texas landed at 9:15 a.m. in Guatemala. The two passengers with fevers were tested for COVID-19 and taken to Villa Nueva hospital. The test results have not yet been released. The other passengers are being held at a reception center.

As reported in The Nation, immigration activists, judges, attorneys, and some U.S. Immigration and Customs Enforcement personnel have called on U.S. officials to halt deportations to stop the spread of the virus. COVID-19 spreads rapidly when people are in close contact with each other. The U.S. has come under repeated criticism for unsanitary conditions in its immigration facilities.

BRAZIL: Top soccer clubs have turned over their stadiums to be converted into field hospitals, to help treat patients with COVID-19. The current South American champions, Flamengo, have allowed health authorities to use Maracana stadium in Río de Janeiro. The Pacaembu stadium in São Paulo will also be converted to combat the coronavirus pandemic. According to Health Minister Luiz Henrique Mandetta, the peak of virus infections will take place between April and June. As of Monday night, Brazil had 1,924 confirmed cases of COVID-19.

COLOMBIA: Colombia’s government passed decree 457 yesterday, which detailed the rules for the 19-day national quarantine set to start on Wednesday. The document lists the 34 exemptions, which include leaving quarantine to get healthcare, and to buy food and medicine. The country has 277 confirmed cases of coronavirus and three deaths.

VENEZUELA: The European Union voiced concerns yesterday over U.S. sanctions on Iran and Venezuela during the coronavirus pandemic. The EU requested the U.S. clarify that sanctions do not target humanitarian aid. China and Russia have also called for the lifting of sanctions. The pandemic has claimed at least 1,812 lives in Iran. Venezuelan and Iranian officials say that sanctions limit the government’s ability to respond to the crisis and buy medical supplies.

CUBA-JAMAICA: A group of 140 Cuban health professionals arrived in Jamaica to care for patients with COVID-19 and battle the spread of the virus. The group consisted of  90 nurses, 46 doctors and 4 therapists. The additional medical aid comes after Jamaica reported the first death of a patient infected with the virus. The victim was a 79-year-old man with diabetes and hypertension who had traveled to New York. Cuba has sent six medical brigades to nations that asked for help: Italy, Venezuela, Nicaragua, Suriname, Grenada, and Jamaica.

PUERTO RICO: Governor Wanda Vázquez announced yesterday that Puerto Rico will spend $787 million on a financial package to aid citizens and businesses impacted by the coronavirus pandemic. The measures include a $500 handout to self-employed workers, $1,500 for small and medium businesses not eligible for federal help, and bonuses that range from $2,000 to $4,000 for health employees, police officers and emergency workers. There is also a 90-day moratorium for mortgages and loans that should not affect people’s credits. Part of the funds will also be used to acquire health supplies. The largest sum, $240 million, will go to the Education Department, responsible for keeping classes online during the territory’s lockdown.

PANAMA: Starting today, the curfew implemented by President Laurentino Cortizo will last four hours longer than it has previously, and will now last from 5 p.m. to 5 a.m. The restrictions apply to the whole nation with exceptions for citizens who work in the health sector, supermarkets, banks, agriculture, telecommunications or security industries. Between Friday and Sunday, 1,062 people were arrested for disobeying the curfew. Those who do not comply with the curfew face a fine that ranges from $50 to $1,000 and attend a session with a judge.

MEXICO: Voters ousted a U.S.-owned company that was planning to build a $1.4-billion brewery in Mexicali, a city in Mexico’s arid border region. In a referendum over the weekend, more than three-quarters of voters rejected Constellation Brand’s proposed facility, though less than three percent of eligible voters participated. Concerned about the brewery’s intensive water use, opponents have been calling for a vote for years. The referendum, which was announced two weeks ago, was the latest in a series of popular consultations over big development projects in Mexico. Constellation Brands’ products include Corona, Modelo, and Pacífico.

The capital’s density makes it the area of most concern for local spread of the virus. On Monday, the World Health Organization classified Mexico for the first time as a country with local transmission of the virus. However, Mexico’s health minister said that the country remains in “Phase 1” and that only five cases of the virus have no direct link to a person who traveled out of the country. As of Monday night, authorities reported 367 confirmed cases and four deaths.

U.S.-MEXICO: Widespread measures to slow the spread of coronavirus will apply to construction workers who travel back and forth from other states to help construct the border wall. As President Trump declared a national emergency over the virus, Customs and Border Protection announced plans to add another 150 miles of barriers as construction continues around Texas, Arizona, New Mexico, and California. In a report by The Guardian, the Army Corps of Engineers declined to say whether construction would involve any special procedures to mitigate exposure to the virus.