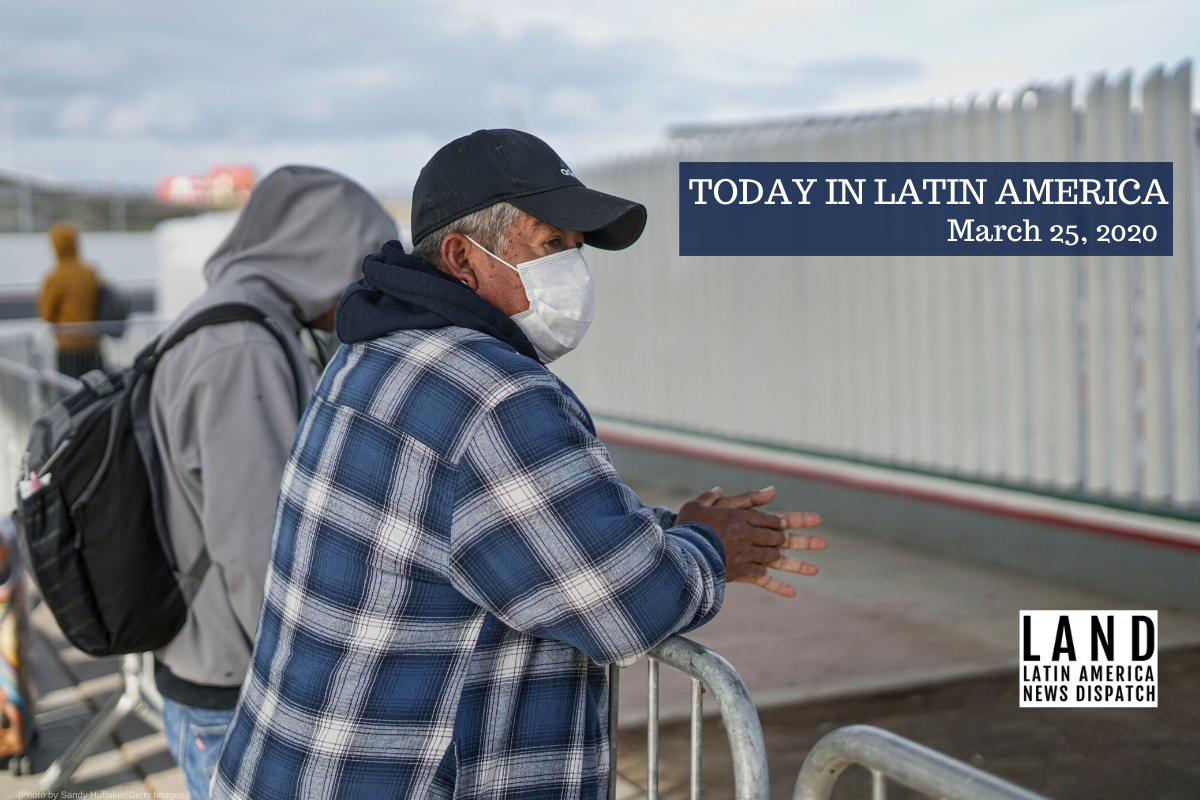 A Honduran migrant wears a sanitary mask while waiting in line to plead for asylum at the El Caparral border crossing on March 2, 2020 in Tijuana, Mexico. (Photo by Sandy Huffaker/Getty Images,)

UNITED STATES: The Justice Department will postpone all hearings that are part of the Migrant Protection Protocols, also known as “Remain in Mexico.” The decision is a preventative step to stop the spread of the coronavirus, but advocates say it will place migrants at further risk.

The policy allows the United States to keep migrants, many Central American, in Mexico while they await a final decision on asylum claims. Many are now living in encampments in border cities like Matamoros, without access to basic hygiene and health services.

The Justice Department said hearings from now until April 22 will be rescheduled. All individuals should still report to their designated ports of entry on their scheduled court date to receive a new hearing date. Immigration judges across the country began suspending court dates last week, pushing back against what many saw as a lack of action to stop the spread of the virus among immigrants.

The coronavirus pandemic has led to even more restricted border controls and a rush by the Trump administration to complete the U.S.-Mexico border wall. On March 17, President Trump announced that all future asylum seekers would be turned away at the border.

ARGENTINA: Citizens between 18 and 65 years old who have been “economically affected” by quarantine policies will receive a $400 allowance. The assistance, part of the Emergency Family Allowance (IFE), will be distributed in April via an online application. Families that have other sources of income will not be eligible. The country’s finance minister, Martín Guzmán, said the government expects to help 3.6 million families with the aid package. Argentina has 387 confirmed cases of the coronavirus and six deaths.

CHILE: A cruise ship carrying more than 1,800 people was again forbidden to dock in Chile. 42 passengers presented flu-like symptoms. All sick passengers have been isolated and their close contacts were put in quarantine as COVID-19 testing is not available on board. Since March 15, the vessel has been trying to disembark on the coast of Chile before its final port in Fort Lauderdale, Florida. On March 20, the ship was allowed to stop in Valparaiso to stock food, medicine and fuel despite the country’s closed borders. The country has already reported 922 cases and two deaths related to the coronavirus.

COLOMBIA: Justice Minister Margarita Cabello said some low-risk prisoners may be released after deadly riots over the spread of the coronavirus. Cabello said in a radio interview that the government was assessing a partial release of inmates. Human rights activists and prisoner advocates support the decision, citing fears of overpopulation and a lack of preventative health measures. Bogotá’s Modelo Prison has approximately 5,000 inmates, and unrest was reported at 12 other jails across Colombia. As of Tuesday, Colombia has 378 confirmed cases of the coronavirus.

DOMINICAN REPUBLIC: The U.S. Department of State closed its embassy in Santo Domingo and announced that it will only open for “life or death” emergencies. Although the number of confirmed coronavirus cases in the country remains low, Dominican fashion designer Jenny Polanco died of COVID-19 yesterday. Of 312 confirmed cases, 68 have been isolated in hospitals and 234 patients are at home, said Public Health Minister Rafael Sánchez Cárdenas.

GUATEMALA: Guatemalan President Alejandro Giammattei announced that the country had 21 confirmed cases of the virus, with 1,000 possible cases under supervised quarantine. Giammattei also announced a 50% cut to interest rates in hopes of lessening the expected economic crisis.

PANAMA: The Ministry of Health released a statement saying that a thirteen-year-old girl died of the coronavirus. The child was being treated at a pediatric hospital, and researchers at the Gorgas Memorial Institute of Tropical and Preventive Medicine determined that she died of respiratory complications associated with the COVID-19 disease. Panama had 345 confirmed cases of the virus and six fatalities as of Tuesday.

MEXICO: Deputy Health Secretary Hugo López-Gatell the beginning of “Phase 2” of the country’s mitigation plan against the coronavirus pandemic. The measures restrict non-essential business activity that requires people to travel in public places. According to López-Gatell, “Phase 2” began because the government could no longer identify the source of infection on a case by case basis. As of Tuesday, Mexico had 405 confirmed cases and five deaths.

MEXICO: The Foreign Ministry formally requested the extradition of a top oil executive from Spain for alleged corruption. Emilio Lozoya was the director of state-owned oil company, Pemex, from 2012 to 2016. Lozoya was also a key figure in the presidential campaign of Enrique Peña Nieto. According to the prosecutor, Lozoya is wanted for money laundering, bribery and fraud. Lozoya was arrested in Málaga, Spain in February using a fake license.