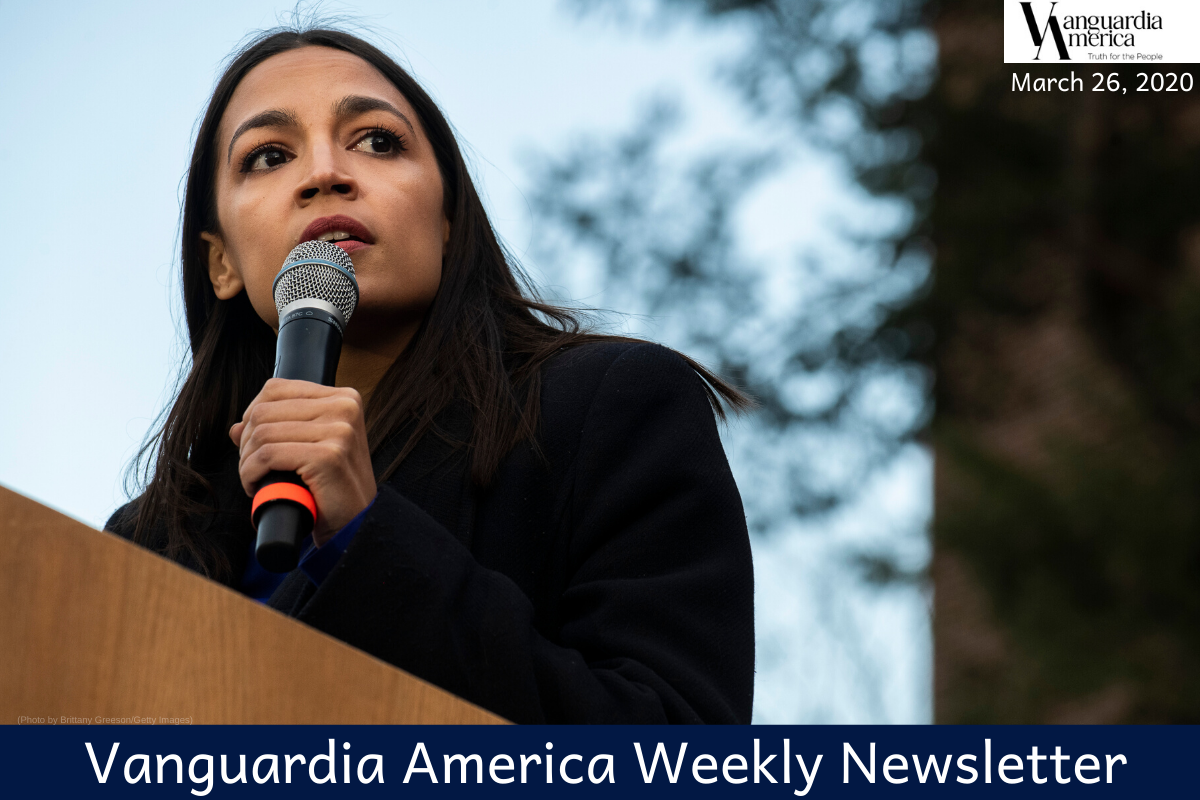 In a recent CNN interview, U.S. Rep. Alexandria Ocasio-Cortez, D-New York, said President Trump’s decision not to implement the Defense Production Act could cost the lives of thousands of people.

“We cannot wait until people start really dying in large numbers … we need to start this production right now to get ready for the surge that is coming in two to three weeks.” -Rep. @AOC reacts to Pres. Trump not enforcing the Defense Production Act. #CNNSOTU pic.twitter.com/sENJMXfHkC

The Defense Production Act allows the president to order privately-owned companies to manufacture desperately needed medical supplies to help battle coronavirus, but he has so far resisted exercising that authority.

Echoing the views of health officials nationwide, Ocasio-Cortez said, “There are not enough face masks, gloves, ventilators, hospital beds to get us through this… And there is kind of no real stream insight from the federal government on where these materials are coming from.”

Tens of thousands of asylum seekers ordered to wait in Mexico for federal court hearings in the U.S. will have their cases postponed until after April 22.

Citing the spread of COVID-19, the Trump administration has also announced it would immediately begin deporting people who cross the Mexico border undocumented, a move civil rights groups say will illegally prevent eligible asylum seekers from applying for protection.

As many as 60,000 asylum seekers, most from Central America, have been waiting weeks or months for their day in court.

Federal authorities say the first immigrant being held in a U.S. detention facility has tested positive for the coronavirus.

“The individual has been quarantined and is receiving care,” said a statement released by U.S. Immigration and Customs Enforcement (ICE). The patient is reportedly a 31-year-old Mexican man who is being held in Bergen County Jail in Hackensack, N.J.

Immigrants rights groups have called for the immediate release of jailed migrants, especially the elderly and those with underlying health conditions. About 40,000 people are being held in the U.S. by federal immigration and customs authorities.

Health experts say migrant detainees are “sitting ducks” for the spread of the virus, according to Andrea Flores, deputy director of policy in the Equality Division at the American Civil Liberties Union (ACLU).

“The suffering and death that will occur is unnecessary and preventable,” she said.

10 Immigrants Have Died In U.S. Custody Since October

“A 42-year-old Mexican man died in a South Texas hospital while being held pending his deportation,” immigration authorities told the Associated Press. The victim, who died last week, is identified as Ramiro Hernandez Ibarra. Officials say the cause of death was “complications related to septic shock.” Hernandez Ibarra is the tenth person to die in the custody of federal immigration authorities since October 2019.

Cuban Doctors And Nurses Arrive In Italy To Fight Coronavirus

The country’s COVID-19 death toll surpassed 7,000 on Wednesday, exceeding the number who’ve died from the disease in China.

“We’re all afraid, but there is revolutionary work to do. Fear can be controlled and put to the side,” physician Graciliano Diaz told Reuters.

Over the decades, Cuba, which has the highest per capita number of doctors in the world, has sent medical personnel to fight disease across the globe, including cholera in Haiti and Ebola in Africa.

Puerto Rico has announced it will spend $787 million to address the economic and health impact of coronavirus on the U.S. terrority.

Gov. Wanda Vázquez said the plan includes a 90-day moratorium on mortgages and commercial loans, as well as cash bonuses “for nurses, police and other emergency and medical workers,” according to the Associated Press.

The island’s health care system has faced major problems in the wake of Hurricane Maria in 2017 and last year’s devastating earthquakes.

“According to the Health Resources and Services Administration, 72 of the island’s 78 municipalities are considered to be medically underserved and face ‘unmet health care needs,’ ” including a major shortage of physicians and other medical personnel, NBC Latino reports.

The number of “white nationalist groups rose for the second straight year” in 2019, according to a new report by the Southern Poverty Law Center that cites President Donald Trump’s frequent use of racially-charged language.

The SPLC report cited terror attacks in the United States and abroad, including mass killings in El Paso and New Zealand.

A white man from North Texas killed 22 people in a mass shooting at an El Paso Wal-Mart in August 2019. Most of those killed were Latinos, including eight Mexican citizens. The killer told police he planned to kill “Mexicans,” who he described as invaders.

The report is critical of President Trump’s policies and rhetoric, including his description of neo-Nazis who marched in Charlottesville, Virginia in 2017 as “very fine people,” and the appointment of Stephen Miller as Trump’s top advisor on immigration matters.

“The Trump administration has installed members of hate groups into government—particularly those with anti-immigrant, anti-Muslim or anti-LGBTQ animus,” said the SPLC.

Release of Film Version of In The Heights Delayed

Warner Bros. will delay the release of the film-version of “In the Heights,” based on the Tony Award-winning Broadway musical by writer/actor/director Lin-Manuel Miranda. The movie was set to open June 26. The story is set in the Washington Heights neighborhood in Manhattan. A new release date has not yet been announced.

One Day at a Time Is Back, This Time on Cable

Season 4 of One Day at a Time is now on PopTV. The sit-com ran for three seasons on Netflix, but was canceled in June. The show, created by Gloria Calderon Kellett and Mike Royce, stars Justina Machado as Penelope Alvarez and features EGOT-winner Rita Moreno. Seasons 1-3 of the show are still streaming on Netflix. Read a review of the season 4 premiere at Indiewire.com.

Survey: US Latinos Think They’ll Be Among Hardest Hit By Coronavirus

A new survey finds Latinos nationwide believe they will be among the hardest hit population in the nation, when it comes to their personal finances and health, because of the pandemic spread of the coronavirus.

Pew Research Center found that 83 percent of Latinos, as compared to 77 percent of the overall U.S. population, consider the pandemic a major threat to their communities.