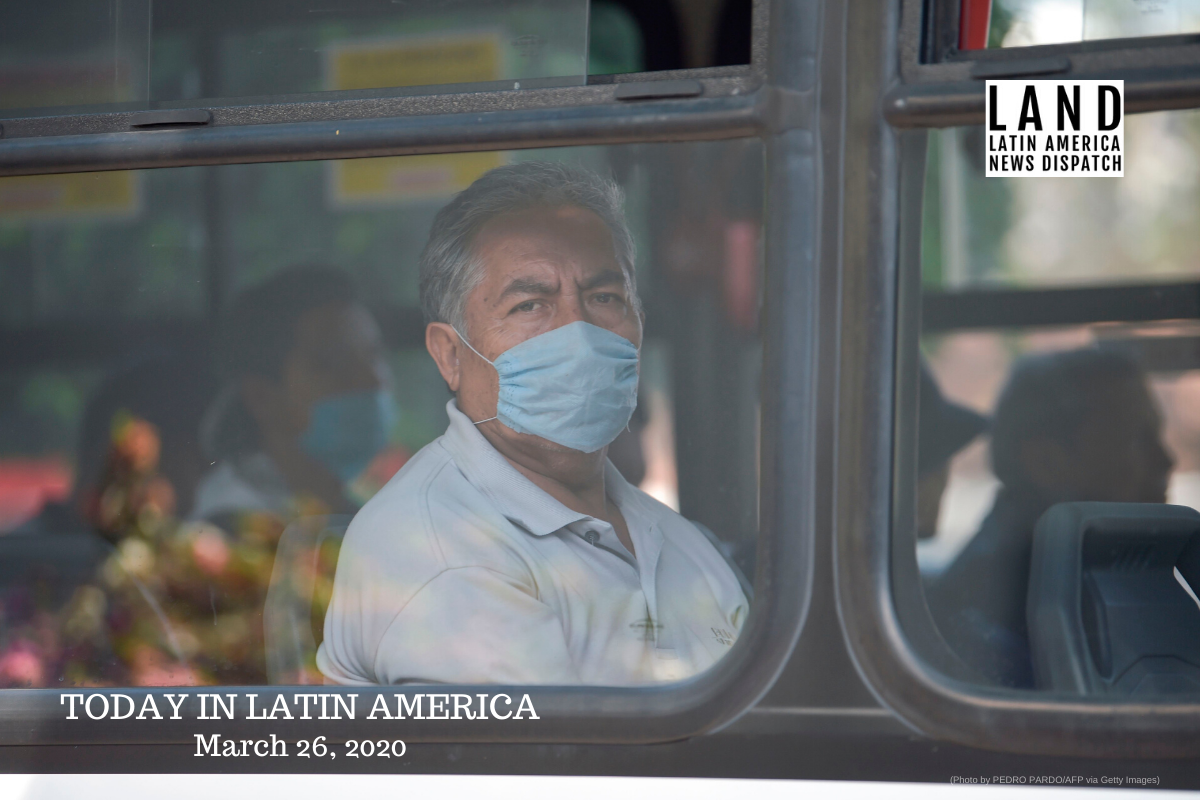 A man wears a face mask at a public bus as a preventive measure against the spread of the new coronavirus, COVID-19, in Mexico City, on March 26, 2020. (Photo by PEDRO PARDO/AFP via Getty Images)

MEXICO-BRAZIL: Attention has turned to the response to the coronavirus in Latin America’s two most populous nations. While countries like Argentina and El Salvador quickly ordered lock-downs and closed borders, Mexico and Brazil did not. Slowing the virus in densely-packed mega-cities like Mexico City, São Paulo and Rio de Janeiro will test the nations’ health systems.

Statements by Mexican President Andrés Manuel López Obrador have discounted the severity of the virus. He said his two amulets, which he called his “bodyguards,” would protect him from the virus.

Meanwhile, Brazil has reported 2,554 confirmed cases and 59 deaths. Brazilian President Jair Bolsonaro claimed he “wouldn’t feel anything” if infected with coronavirus and rejected the idea of state lockdowns.

Bolsonaro has criticized the measures that Brazilian governors adopted to keep people at home and discourage large gatherings. On Wednesday, 26 out of 27 governors met without the president to discuss their strategies. Brazilian Health Minister Luiz Henrique Mandetta warned that Brazil’s public health system will likely collapse by the end of April.

BRAZIL: President Jair Bolsonaro accused Brazilian media outlets of hyper-focusing on the deaths in Italy to “stir hysteria” while ignoring calls for a nation-wide lockdown. At the same time, Brazilian citizens have continued protesting the president’s lack of concern, and gangs in Brazil’s poorest neighborhoods have begun enforcing quarantine regulations themselves after the first confirmed case of the coronavirus appeared in the Cidade de Deus favela. Gang members patrol the neighborhoods to ensure an 8 p.m. curfew, telling residents to take the threat of the virus seriously and “stay at home and chill.”

ARGENTINA: President Alberto Fernández suspended all citizen repatriation efforts yesterday, as the country enters its seventh day of quarantine and thousands of Argentine citizens attempt to return home. Thousands of travelers have already returned, but officials fear that allowing more re-entries will exacerbate the spread of COVID-19. During an interview on Cortá por Lozano, Fernández said officials were working to provide resources for as many as 20,000 tourists still abroad. Defense Minister Agustín Rossi clarified after the broadcast that citizens over 65 years old will still be allowed to re-enter the country.

SURINAME: Public officials fear an economic shutdown as businesses shut down to comply with quarantine measures and revenue from European tourists slows to a halt. A new measure imposing strict restrictions on foreign currency transactions went into effect on Tuesday, making black market transactions punishable by up to three years of prison and establishing a militia to monitor illicit trading. Steven Coutinho, head of De Surinaamsche Bank, said the lack of cash flow has the potential to shut down the entire economy.

CUBA: The island’s government has banned Cuban residents from leaving the territory and suspended inter-provincial travel as a way to curb the spread of COVID-19. Authorities also announced that schools will remain shuttered until April 20. Cuban residents and foreign nationals who reside in Cuba may return, but will be required to undergo a 14-day quarantine. A 30-day ban on foreign tourism to the island went into effect on March 24. Cuban authorities have ramped up their efforts to contain the virus in the country, which has 57 confirmed cases, as Cuban doctors travel abroad to help countries like Italy and Jamaica.

COSTA RICA: On March 23, President Carlos Alvarado’s administration issued a number of new measures in response to the spread of COVID-19 in the country that went into effect on March 24, including mandating that all foreign residents who leave Costa Rica automatically lose their immigration status. Temporary and permanent foreign residents regardless of nationalities are subject to the new measure, which has no defined end date as of now. The president also ordered all beaches and religious countries across the country to close as well as instituted a driving restriction between 10 p.m. and 5 a.m. Costa Rica surpassed 200 confirmed cases of the virus yesterday, raising the total to 201.

NICARAGUA: The country’s military discreetly closed down unofficial entry points scattered across Nicaragua’s southern border with Costa Rica and plans to bar any movement through these points, reports La Prensa. The move comes after a March 21 meeting between Costa Rican and Nicaraguan officials during which the two countries agreed to share health-related information, but did not commit to closing their shared border. Officially, Nicaragua only has two confirmed cases of COVID-19, both of which were imported.

EL SALVADOR: In an interview with Puerto Rican musician Residente via an Instagram livestream, Salvadoran President Nayib Bukele addressed the handling of the coronavirus outbreak by leaders in other regions. The countries discussed included the United States, Mexico and Brazil, with Bukele stating that slow responses to the pandemic will “take its toll” on healthcare systems sooner rather than later. El Salvador is currently under a complete quarantine despite there being only five known cases in the country, and is providing families directly affected by the virus with $300 per month. Bukele said that the country is also in the midst of building homeless shelters since a large portion of the population continues to live in extreme poverty. During the livestream, the president also stated that he was against abortion rights and gay marriage.

MEXICO: Mexico police are investigating robberies and lootings as the coronavirus spreads. Mexico City authorities reported four robberies in the capital on Wednesday. False reports of lootings were posted on social media, according to a police statement. Online postings led many to imitate the attacks overnight, and some postings urged people to take food and necessary supplies from a list of box, grocery and department stores. Authorities have also reported the stealing of cell phones and electronics.

UNITED STATES: U.S. Immigration and Customs Enforcement (ICE) airlifted a group of U.S. citizens and residents stranded in Honduras Sunday afternoon. The plane that evacuated the Americans had carried 92 deportees hours earlier. The aircraft was part of a fleet of ICE planes used in deportations. Deportation flights occurred despite the border closure on March 15, as Honduras continued to accept deportees from the U.S. The group of citizens coordinated the flight with an embassy official after hearing about a football team being airlifted. Little information was given about the flight. In a statement, an ICE spokesperson assured that the State Department will continue to facilitate the safe return of U.S. citizens from Guatemala, Honduras, and El Salvador throughout the coronavirus pandemic.