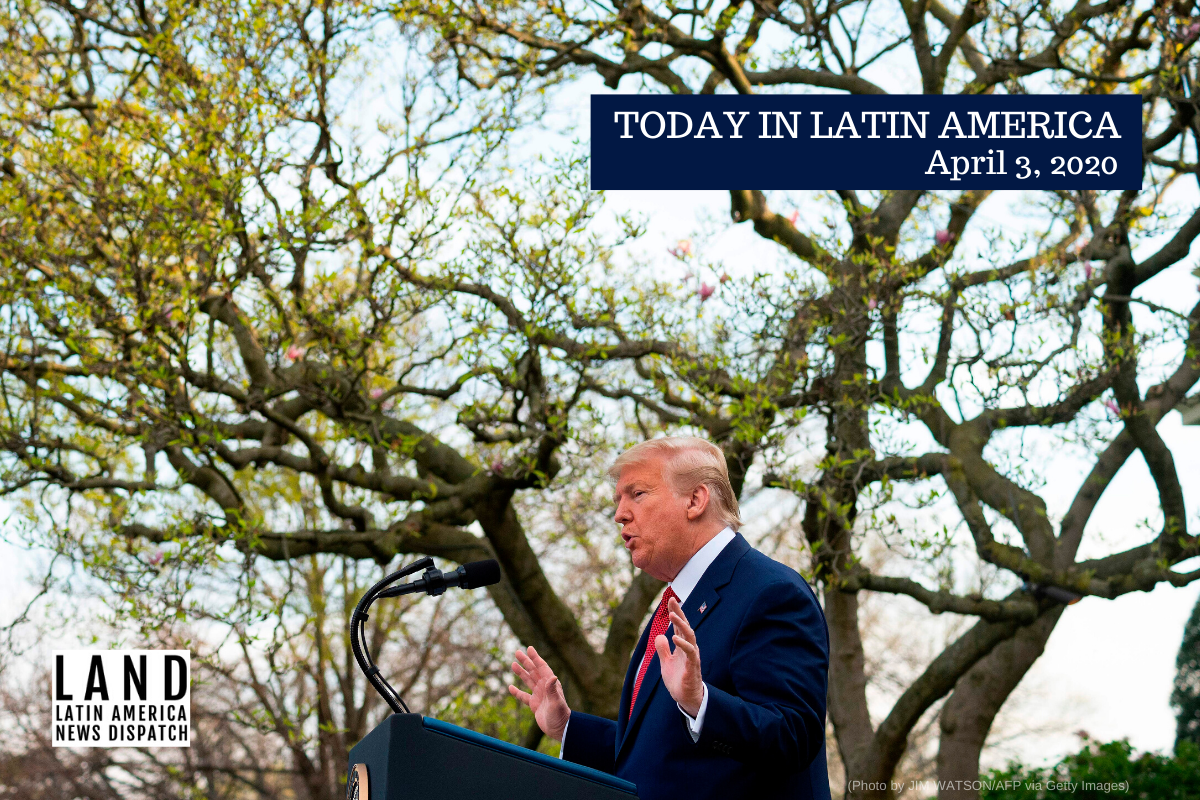 US President Donald Trump speaks during a press briefing in the Rose Garden of the White House in Washington, DC, on March 29, 2020. (Photo by JIM WATSON/AFP via Getty Images)

UNITED STATES-CARIBBEAN: President Donald Trump said the United States is sending warships to the Caribbean to halt drug trafficking. Trump said it is an effort to “increase surveillance, disruption and seizures of drug shipments and provide additional support for eradication efforts which are going on right now at a record pace.” The move came a week after the United States charged Venezuelan president Nicolás Maduro and other members of the government with “narco-terrorism.”

The deployment includes Navy destroyers, combat ships, aircraft, helicopters, Coast Guard cutters and an Air Force surveillance aircraft. Trump said the U.S. is cooperating with 22 partner nations to strengthen the U.S. Southern Command. In response, the Venezuelan government called the deployment a “distraction” from the coronavirus pandemic. The deployment comes two days after Secretary of State Mike Pompeo proposed a plan for a democratic transition in Venezuela.

BRAZIL: In Paraisopolis, São Paulo’s largest favela, a residents association hired its own medical team due to mistrust in the government, Reuters reported. Paraisopolis has around 12,000 residents and many work in more affluent neighborhoods, where the first coronavirus cases in Brazil emerged. A member of the medical team said they had authorization from First Capital Command (PCC), Brazil’s largest gang and de facto authority in Paraisopolis. Due to the cramped conditions that do not allow social distancing, the association is also trying to house the sick in two closed schools to further contain the spread.

CHILE: Health Minister Jaime Mañalich opposed a total quarantine to stop the spread of the coronavirus. Mañalich explained that only retirement homes will be completely locked-down because elderly people are a vulnerable population. However, Mañalich said that the recommendation is for all people to stay home whenever possible. Chile has 3,404 confirmed cases and 18 deaths.

COLOMBIA: President Iván Duque declined a direct medical equipment donation from Nicolás Maduro. The Venezuelan president said he wanted to show solidarity with Colombia and donate two Chinese machines for coronavirus testing. Duque said that his administration would only accept the offer via the Pan American Health Organization (PAHO) because Colombia does not have diplomatic relations with Venezuela. Duque said that Colombia’s National Health Institute can test up to 1,600 people per day and that a machine which has broken is now functioning again.

PERU: President Martin Vizcarra issued a new quarantine measure, which would restrict movement based on gender. Under the new rule, men would be able to leave their homes on Mondays, Wednesday and Fridays. Women be able to leave home on Tuesdays, Thursdays and Saturdays . Outdoor activities are restricted from 8 a.m. to 6 p.m. No one will be allowed outside on Sundays. According to Vizcarra, this restriction was approved after discussions with the Ministry of Interior and the Ministry of Defense. The measure will stay in effect until April 12 and does not include essential workers.

DOMINICAN REPUBLIC: Authorities have arrested nearly 20,000 people for violating the curfew imposed on March 20 in an effort to prevent the spread of the coronavirus. Security forces have increased their patrols to 24 hours a day, to ensure that the curfew is respected, and that social distancing is being practiced in essential locations and businesses that remain open. 60 people have died from COVID-19 in the Dominican Republic.

PUERTO RICO: Health secretary Lorenzo González said that the government made mistakes in its preparation for the coronavirus, calling the process “deficient.” González said that there were errors in tracing and tracking people who tested positive for the coronavirus, warning that Puerto Rico hasn’t reached the peak number of cases. The island lacks protective equipment and ventilators, as it competes with the mainland United States for limited supplies. González warned that there is “no guarantee” that the equipment will arrive. He said that 200,000 rapid tests set to arrive this weekend may not be usable, because they may not be approved by the Food and Drug Administration or the Center for Disease Control and Prevention.

EL SALVADOR: Homicide rates in El Salvador have fallen, which some experts are attributing to the mandatory quarantine in place to stop the spread of the coronavirus. Government statistics show that there were only 65 homicides in March. There have been up to 600 murders in previous months. On Twitter, the Minister of Public Safety and Justice, Rogelio Rivas wrote that there were four days without a single murder.

On social media, videos show gang members enforcing the quarantine by beating those who violate the social distancing policy, and audio recordings of Mara Salvatrucha members threatening violators. Attorney General Raul Melara announced that prosecutors are launching an investigation into the videos and recordings.

NICARAGUA: The government declined to adopt quarantine measures to protect the country from the spread of the coronavirus, and is encouraging people to continue their lives as usual. Doctors, journalists and public figures have expressed their concern over the lack of action, and their beliefs that officials are not releasing accurate data about the number of coronavirus cases. The government says there are only five confirmed cases of COVID-19 and one death, but doctors in public hospitals have cited an increase in pneumonia patients that are not being tested for the virus.

MEXICO: The cost of building a new Pemex oil refinery on the Tabasco coast could significantly increase due to the weakened value of the Mexican peso against the U.S. dollar. According to El Financiero, building the refinery could cost 190.4 billion pesos, an increase of 23.3%. In addition to a weak currency, the price of Mexico’s crude export plunged to its lowest level in 21 years. Even before oil prices started to plummet, many experts argued that the government should not invest in a new refinery.