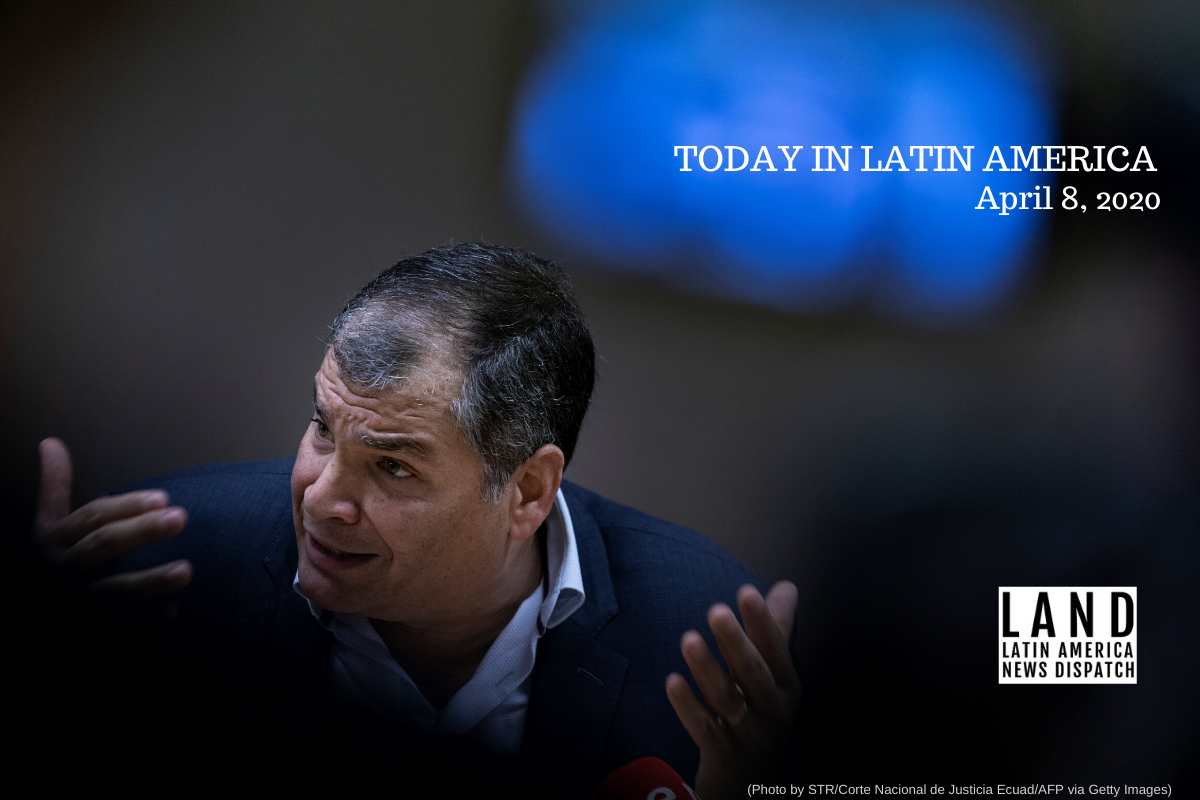 ECUADOR: Former President Rafael Correa received an eight-year prison sentence on Tuesday. The National Court of Justice convicted Correa and 19 other people on bribery charges. The group faced accusations that between 2012 and 2016, they accepted $8 million in bribes from companies seeking government contracts. The ruling also blocked Correa from political office for 25 years, derailing his potential 2021 run.

Correa took office in 2007, as one of a wave of left-wing leaders winning elections in Latin America. He moved to Belgium after his presidency ended in 2017 and lives there still, but could be subject to arrest if he returns to Ecuador. Correa’s first Vice President was Lenin Moreno, who is now the country’s president and an outspoken critic of Corra. Jorge Glas, later served as his vice president, and was also convicted yesterday in the bribery case. Glas is currently in prison for taking a bribe from Odebrecht, the Brazilian construction firm involved in numerous, high-profile corruption cases.

On Twitter, Correa responded to the decision by writing that Moreno, the Attorney General, and the Vice President “conduct the worst and fiercest political persecution in the region.”

BRAZIL: The education minister angered the Chinese government by suggesting that the coronavirus was helping China with a “plan for world domination.” Chinese diplomats called the tweet “highly racist” and asked the administration to make a statement. The incident echoed tweets by President Jair Bolsonaro’s son, Eduardo Bolsonaro, calling the pandemic the “Chinese virus” and blaming Chinese authorities for its spread. Brazil’s health minister said the country is having trouble buying medical equipment from China, its biggest trading partner.

PERU: With restaurants shuttered, market vendors strapped for cash, and passerby more nervous around strangers, Peruvians who were already facing food insecurity are struggling even more to feed themselves and their families. The government offered $400 to feed 12 million people, but as the AP reports, the money has not reached everyone who needs it. For a month now, 32 million people in the country have been staying home.

VENEZUELA: The children of some of the country’s top officials shocked Venezuelans stuck at home when they ignored coronavirus-related restrictions and partied in Los Roques, a string of islands in the Caribbean. Jesús Amoroso, the son of a top anti-corruption official, was one of the party-goers. On March 20, president Nicolás Maduro said nearly everyone who attended the party last month tested positive. Although the country had only seven confirmed deaths as of yesterday, the pandemic could easily overwhelm Venezuela’s struggling health care system. Some hospitals are missing basic supplies, water and electricity.

ICE is planning on deporting a number of Haitians tomorrow, according to immigration lawyers. Amid COVID-19, US should halt all deportations – especially to countries with limited resources to respond. Haitian government should follow lead from Guatemala and demand the same. pic.twitter.com/oPZVhCEQ7u

Congressional representatives began contacting federal immigration authorities to halt the flight due to concerns of spreading the coronavirus to a country with limited resources to contain it. But Johnson reported that the flight had departed yesterday.

PUERTO RICO: The Puerto Rican Health Department reported the island’s youngest COVID-19 related death yesterday. Government officials announced that a 40-year-old man had died of the disease, bringing the territory’s death count to 23 out of 573 total confirmed cases. Earlier in the week, Gov. Wanda Vázquez intensified local security measures by signing an amendment to enforce curfews with the threat of fines or jail time.

EL SALVADOR: In a televised address on Monday, President Nayib Bukele announced that state security forces will take a harder line in enforcing quarantine orders. The new enforcement measures will include confiscating the cars of those who disobey the quarantine rules and holding violators in “containment centers” for 30 days. Bukele also extended the country’s lock-down for another 15 days. As of yesterday evening, El Salvador had 78 confirmed coronavirus cases.

GUATEMALA: The Health Ministry announced yesterday that a third migrant deported to Guatemala from the United States has tested positive for the coronavirus. The 37-year-old man, who arrived in Guatemala on March 26, traveled on a plane with two other migrants who also tested positive for the virus. On Monday, U.S. officials announced that they would pause deportation flights over concerns of further spreading the virus.

MEXICO: Health Undersecretary Hugo López-Gatell urged citizens not to discriminate against health workers in the midst of the coronavirus pandemic. Doctors and nurses in a Guadalajara hospital report having to change out of their scrubs to make it home because public buses will not let them board. In Nuevo León, a hospital was the scene of an arson attack. Nurses have also been victims of bleach attacks, verbal abuse, and physical aggression.

López-Gatell also announced that the 2,711 ventilators purchased by the government to address the coronavirus crisis will be delivered in several waves from now until September. This week, 11 ventilators are expected to arrive, with another 1,620 reaching Mexico in June and July. As of Tuesday night, Mexico had 2,785 confirmed cases of COVID-19 and 141 people had died.

MEXICO: The government petitioned the United States and Canada for more time to adjust to the rules of the United States-Mexico-Canada Agreement, or USMCA. Mexico’s national automanufacter lobby, AMIA, had previously said the July 1 implementation date was too soon. The group asked to postpone until January 2021. Groups representing U.S. automakers have also expressed support for a delay. USMCA is set to replace the 1994 North American Free Trade Agreement, or NAFTA.