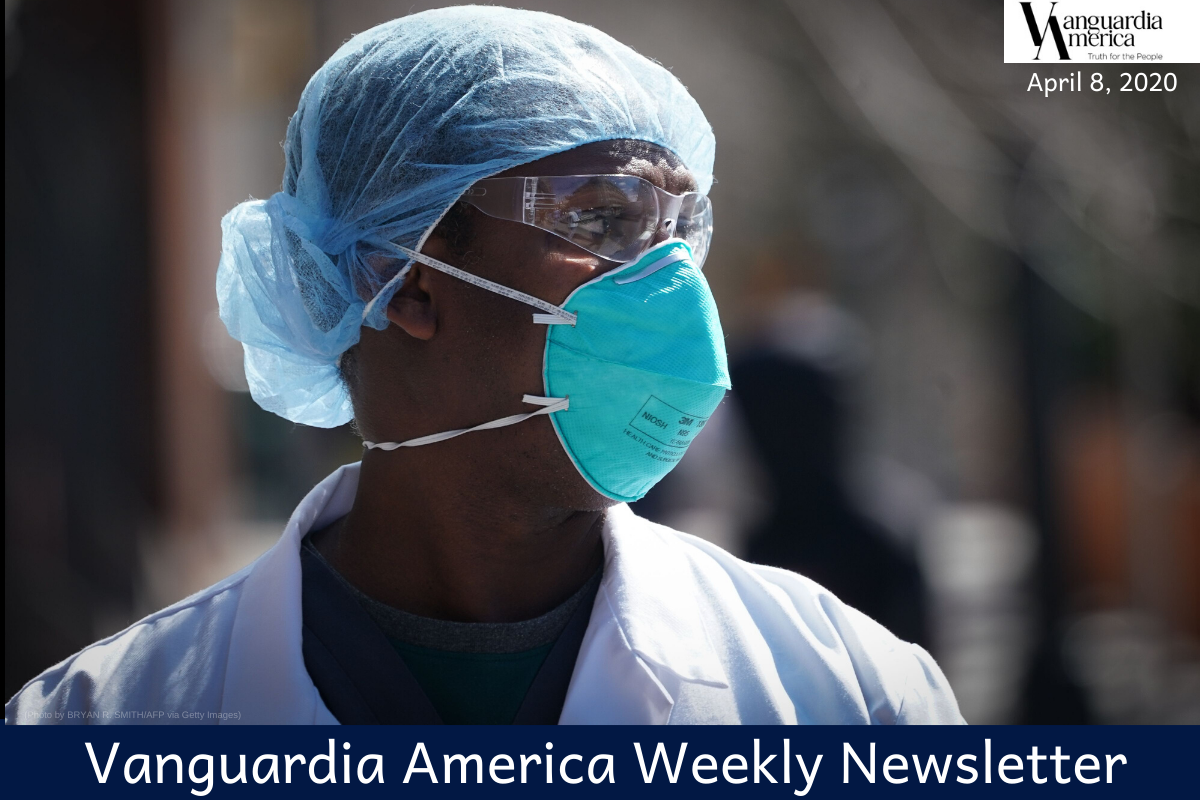 A member of the medical staff listens as Montefiore Medical Center nurses call for N95 masks and other critical PPE to handle the coronavirus (COVID-19) pandemic on April 1, 2020 in New York. (Photo by BRYAN R. SMITH/AFP via Getty Images)

African Americans have been hard hit by the spread of the coronavirus and Latinos may face comparable health risks, health experts and elected officials across the country say.

COVID-19’s impact is disproportionately affecting Black people and Latinos partly because fewer in those communities have health insurance than white Americans and many face discrimination when seeking medical treatment.

Both communities experience higher rates of hypertension, heart disease and diabetes than the white population, and having such underlying medical conditions can sharply increase a patient’s likelihood of death from the coronavirus, according to the Centers for Disease Control and Prevention.

The rapid spread of the virus, especially in major urban areas, is already producing devastating results among the black population nationwide. In Louisiana, African Americans are 32% of the state’s population, but 70% of deaths caused by coronavirus. African Americans in Illinois and Michigan are facing similar infection rates, the New York Times reports.

Some fear a similar scenario may be playing out among Latinos, though most states have not reported data on deaths from coronavirus by race or ethnicity.

On Wednesday, New York City numbers showed that 34% of those who have died from the virus have been Hispanic.

“Locally, we are already seeing evidence that communities of color, including immigrant communities, have higher rates of coronavirus cases, even though testing is still not widely available,” Democratic Congressman Joaquin Castro told The Hill.

In Massachusetts, the “two largest community health centers, in East Boston and Lawrence, have encountered a disproportionately large surge of coronavirus cases among Spanish-speakers,” according to the Boston Globe. Manny Lopes, who runs the East Boston Neighborhood Health Center, told the Globe, “It’s a large immigrant community that is always afraid in the environment they live in today, even before the virus.”

Fearing that COVID-19 cases are being underreported among Latinos, Chicago Mayor Lori Lightfoot ordered Tuesday that undocumented immigrants be allowed access to coronavirus-related housing and small business relief programs run by the city.

Immigrants rights groups say the country’s 10.6 million undocumented immigrants are ineligible for COVID-19-related assistance authorized by Congress under a $2 trillion federal relief package, though many pay federal income taxes. “Undocumented immigrants paid $27.2 billion in taxes in 2017, $9.9 billion of which went to state and local governments…” according to America’s Voice, an immigrants advocacy group.

Latino workers will face higher unemployment rates than the general population as a result of the unfolding economic slowdown sparked by the spread of coronavirus.

The U.S. lost 700,000 jobs in March, according to the U.S. Labor Department, though experts predict job losses will skyrocket.

Many Latinos work at jobs already being hit hard by the virus-driven economic shutdown. While the overall jobless rate is now 4.4 percent, unemployment among Latino workers is 6 percent.

“Nationally, a little more than 36% of all U.S. workers last year identified as Black, Asian or Hispanic or Latino. But 44% of leisure and hospitality jobs, 47.5% of food services and drinking places jobs and 55.7% of accommodation jobs—which includes many hotel employees” are filled by people of color, according to an analysis by U.S. News.

A recent survey by the Pew Research Center found “49% of Hispanics say they or someone in their household has taken a pay cut or lost a job —or both— because of the COVID-19 outbreak, compared with 33% of all U.S. adults.”

A Seattle-based company that provides low-cost legal services to immigrants says the shutdown of federal immigration services could mean as many as 441,000 people who want to become naturalized U.S. citizens may not be able to vote in the November elections. In a press release, they shared boundless reports that some 2,100 immigrants a day between now and November 3 “will run out of time” to become U.S. citizens because of the unexpected closure of the U.S. Citizenship and Immigration Services offices.

Tara Reade, a former staffer for then-U.S. Senator Joe Biden, has accused the front-runner for the Democratic presidential nomination of sexually assaulting her in the early 1990s, according to several news accounts.

The Biden campaign has strongly denied the charge. The National Women’s Law Center, which houses the Time’s Up Legal Defense Fund (founded in the wake of the #MeToo movement to support survivors of sexual assault and harassment), referred Reade to outside attorneys, according to The Intercept. None of the attorneys agreed to represent her, and few major news outlets have covered her story.

Time’s Up had since decided it cannot help Reade as she pursues her claims against Biden because doing so could threaten the organization’s federal nonprofit tax status, which precludes such organizations from doing “anything to improve or damage a politician’s chance of winning an election.”

The Biden campaign issued this statement in response to Reade’s allegations: “Women have a right to tell their story, and reporters have an obligation to rigorously vet those claims. We encourage them to do so, because these accusations are false.”