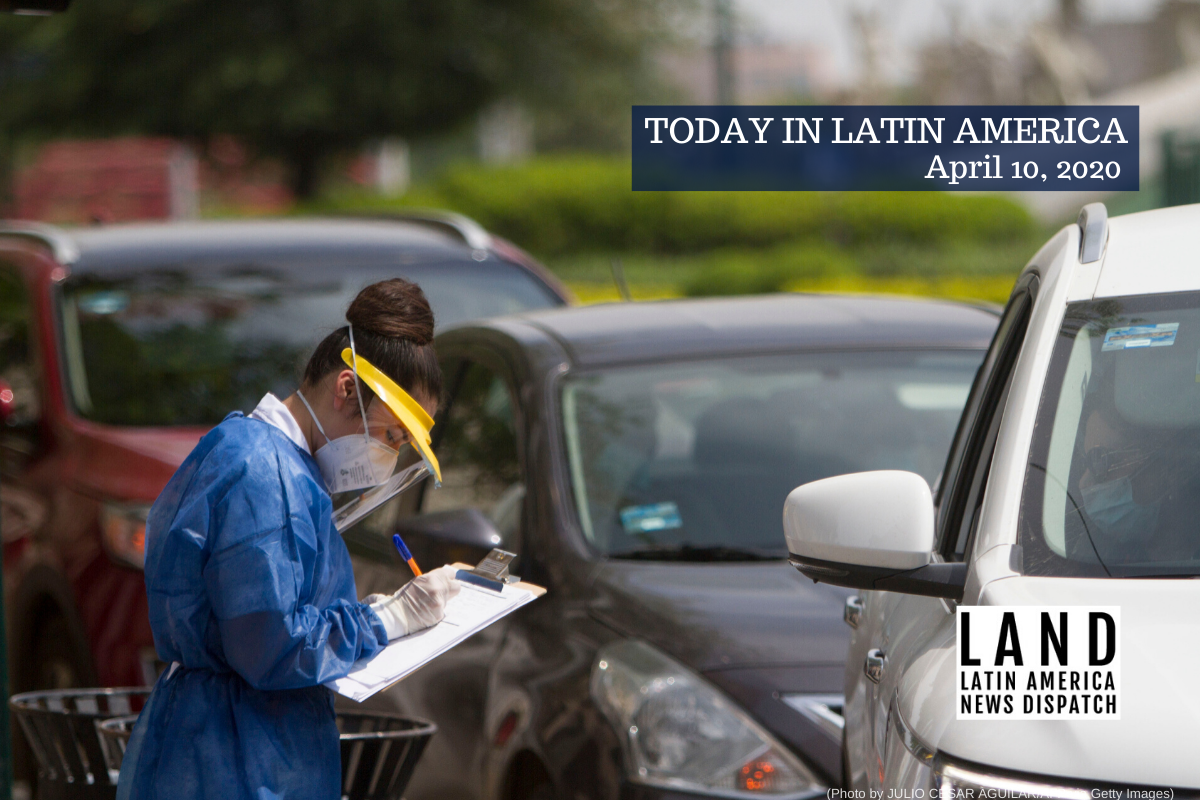 A health worker takes notes of personal information of people who will be tested for COVID-19 during the beginning of a public testing program in Monterrey, Nuevo Leon, Mexico, on April 09, 2020. (Photo by JULIO CESAR AGUILAR/AFP via Getty Images)

MEXICO: Deputy Health Minister Hugo López-Gatell explained in a press briefing that health officials estimate 26,000 people in Mexico have coronavirus. Mexico is using the sentinel surveillance system, which extrapolates from a sample of the population to predict the total number across the country. The estimates announced this week are eight times higher than the number of confirmed cases of the disease in the country. The health ministry’s data was obtained from 376 different healthcare facilities.

“When we had only 12 cases, with this systematic exploration [through the sentinel system] it was sufficient to make the decision … to begin the social distancing activities,” López-Gatell said. He added that given the large number of undetected cases, people should continue to maintain a healthy distance from each other and stay in their homes as much as possible. This is especially important since many healthcare facilities and personnel lack sufficient personal protective equipment (PPE).

At least 97 workers at four hospitals operated by the Mexican Social Security Institute (IMSS) have tested positive for the virus and three have died. “They send us to war without a gun,” one worker told El Universal newspaper. Workers report having to make their own plastic face shields to wear while on duty.

BRAZIL: Emergency payments of 600 reales, or 118 USD,  have been electronically disbursed to 2 million people in the country. This monthly stipend is part of a program to alleviate economic difficulties due to the coronavirus pandemic and quarantine measures. The program is directed towards informal workers, self-employed people, single mothers, and roughly 13 million people who receive payments in the Bolsa Familia program for low-income people. Brazilians who were able to electronically receive these payments first were those that have accounts with Banco do Brasil or other public banks. The initiative has faced some logistical challenges due to the high volume of beneficiaries that have signed up since its creation last week. In the first 48 hours, 27 million people signed up.

PARAGUAY: Brazilian soccer player Ronaldinho was released from a maximum security prison in Paraguay and granted house arrest. Ronaldinho and his brother, Roberto de Assis Moreira, will stay in a hotel for the remainder of the investigation. The brothers were arrested after allegedly entering the country with fake Paraguayan passports. Their lawyer maintains they were unaware that documents, provided by a local sponsor, Dalia López Troche, were fake. The case is one of the most high-profile in a series of arrests that led to the resignation of Paraguay´s top immigration authority.

COLOMBIA: The government comptroller found irregularities in coronavirus relief contracts of close to 20 million USD. These contracts are to supply products and food for low income citizens suffering due to the coronavirus pandemic. Attorney general Fernando Carrillo Flórez announced ten new cases in which the alleged economic irregularities and cost overruns will be investigated. These cases are against government officials in eight different departments. Carrillo Flórez said the findings from the investigations will be tried criminally and will potentially lead to the suspension of the contracts and the government officials who are involved. Costs for staple grocery items have surged amidst the crisis with a reported 40 percent price increase in rice and a 50 percent price increase in lentils and beans.

VENEZUELA: Over 5 million Venezuelans have migrated to other Latin American countries in recent years due to the economic and political crisis in their home country. In the midst of the coronavirus pandemic and the government-mandated stay-at-home orders, migrants are deciding to return. From Arauca, Colombia over 500 migrants have now returned to Apure, Venezuela. Even though Colombia closed its borders last month, there is still an open humanitarian corridor that allows immigrants to return to Venezuela. However, migrants must undergo medical checkups on both sides of the border, delaying them for days.

HAITI: Haitians are fleeing the Dominican Republic in the thousands as the coronavirus spreads. Many of those leaving the Dominican Republic are sneaking through Haiti’s closed border, bypassing military checkpoints and medical screenings in the process. According to the United Nations’ International Organization for Migration, over 11,000 Haitians have returned home since March 29, a number tracking migration at both official and unofficial crossings. The mass exodus is causing concerns about Haiti’s ability to control the spread of the virus. Haiti has reported at least 24 confirmed cases of coronavirus and one death. Many Haitians believe the numbers are much higher, as the country has not implemented extensive testing.

PUERTO RICO: The coquí frog, Puerto Rico’s national symbol, is now estimated to have lived in the Caribbean for at least 29 million years. The discovery of an arm bone fossil of the rain frog serves as the oldest record of frogs living in the region. Scientists had long hypothesized that rain frogs lived in the Caribbean from between 15 and 20 million years ago, but they were unable to find fossil evidence. The combination of frog’s lightweight bones and the hot humid climate of the region make it difficult for fossil preservation. The study’s lead author and curator of herpetology at Florida Museum David Blackburn called the coquí “a national treasure,” saying that “not only is this the oldest evidence for a frog in the Caribbean, it also happens to be one of the frogs that are the pride of Puerto Rico.”

GUATEMALA: The government will resume receiving deportation flights from the United States, starting next week. Flights were suspended during Holy Week, although the government allowed a flight carrying 20 unaccompanied minors to land on Tuesday, citing its concerns that the minors would be detained in the United States for an extended period of time. Guatemala is preparing quarantine centers for the returning citizens, after three deported passengers tested positive for COVID-19. In resuming the flights, Guatemala has asked the U.S.to take more precautions when sending people back, and to reduce the number of deportees so they are able to control the quarantine situation. The country has a total of 87 coronavirus cases and three deaths.

NICARAGUA: President Daniel Ortega has been conspicuously out of sight as the country continues to refuse to implement social distancing measures to stop the spread of the coronavirus. Last seen on March 12, his nearly month-long absence has led to rumors and speculation as to whether he is in quarantine, sick in a hospital, or even dead. He was missing from government events, rallies and the funeral of a friend. His disappearance from the public eye has sparked a meme: “Be like Ortega: Stay Home.” His behavior contrasts with his administration’s insistence that large events, public schools and borders remain open, going so far as to promote large gatherings. This policy has caused concern that the epidemic will spread rapidly, putting lives at risk.

MEXICO: Pemex, the Mexican state oil company, is aiming to double drilling this year to 423 wells, according to Bloomberg. President Andrés Manuel López Obrador pledged to revive the heavily-indebted company, despite the recent slump in global oil prices and decline in demand due to the coronavirus pandemic. On Sunday, the president announced that Pemex would get a 65 billion peso tax break to mitigate the economic impact of the pandemic.

MEXICO: The coronavirus has hit the tourism and oil industries the hardest, creating a void that may be filled by the drug trafficking industry. Some experts are concerned that many unemployed people will look for jobs in the informal market for survival, including joining the ranks of criminal groups. “The immediate war we face is Covid-19, but the forever war looming larger is insecurity,” said Jorge Contreras Fornelli, president of the Citizens’ Council for Public Security, known as FICOSS. “We’re very concerned of what’s to come.”