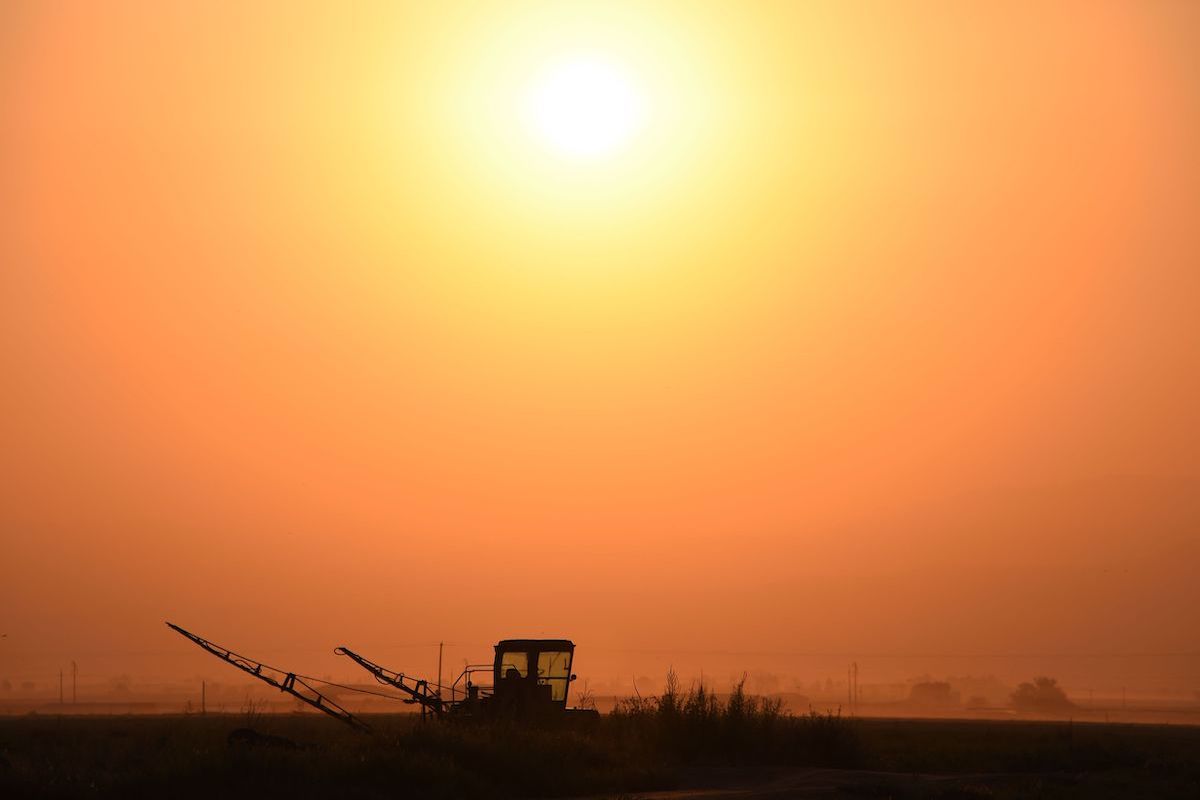 Farm equipment is parked in a field near Bakersfield, California, as the sun rises August 24, 2016. (ROBYN BECK/AFP/Getty Images)

As greater focus is being placed on the demand for more seasonal farmworkers to keep American food shelves full during a global health pandemic, Latino Rebels founder Julio Ricardo Varela recently had the opportunity to speak to Misael, a worker from Mexico who earns a living in the United States under the H2-A guestworker program. Now deemed as “essential workers” by the federal government, these workers still lack basic protections.

Here is what Misael told us via phone from Mexico. Julio conducted the interview in Spanish. The following is an English translation transcript of that phone call. Misael chose to use his first name only.

Julo Ricardo Varela: What do you do for work?

JRV: Where are the farms located?

Misael: In Naples, Florida, but the company works in three states, since the work is cyclical and moves with the heat and weather. For example, you usually work in Florida for about six months, from November to around May. Then you go to South Carolina for the entire month of June. Then you move to Virginia from July to October.

JRV: And you travel through that cycle?

Misael: Yes, my contract ran for 10 months. We started in Virginia for three months and then we moved to Florida, to Naples.

JRV: And right now, you aren’t working on any of the farms, correct?

JRV: Tell me about the working conditions when you worked for that company?

Misael: It’s a really physically demanding job because you need to be fast when it comes to picking tomatoes. The faster you work, the better you get paid. For example, since tomatoes grow better in warmer climates, you’re always working in the heat and the sun. You are working all the time in 90-degree and 100-degree days.

JRV: And how many workers are living together, sharing rooms and common areas?

Misael: Each trailer had 10 workers. There are pretty big trailers with five workers in one section and five in another section. So it was five people in a room. But the rooms were big and we all had enough space.

JRV: What about the kitchen and bathroom?

Misael: We all shared the kitchen and bathroom. It was kitchen with two ovens and two refrigerators for 10 people. The bathroom was the same: two showers, two toilets. We all shared those.

JRV: And when you lived there and worked there, how would you describe the living and working conditions?

Misael: The conditions were good. There were a couple of fellow workers who might have lived in rooms of more than five workers, but those just a few examples of that. In some cases, there might have been seven or 10 workers in the room, and that could have been more uncomfortable for some.

JRV: Are you paying attention to the COVID-19 pandemic and what is happening in the United States? Do you know about the guidelines you should be following to limit the spread of the virus?

Misael: Yes, we are watching it all here in Mexico. More than anything, you can’t leave the house. Wash your hands a lot. Don’t shake hands with people. Or even greet them with a friendly kiss.

Misael: (laughing) Yes, that’s it. We are always hugging and greeting people. That’s hard to do because when you see your relative or a good friend, you want to do that. Sometimes I still do it but I catch myself and remind myself that I shouldn’t be doing it. It’s hard but it’s important to do.

JRV: What about if you were back working for a farm in Florida or South Carolina or Virginia right now and you were told by your company that the United States needed more tomatoes right now and everyone needed to work harder during this pandemic, would you be worried about the conditions at the farms where you worked and lived? Would you be worried about protecting yourself and that the company was protecting you?

Misael: Yes, of course. I would be worried because it is a disease that can lead to very serious consequences. Yes, I would be worried, especially if I were living with my fellow workers where I used to work at. I would have to really think about whether I should be going back now for the next cycle of work later this summer. If they were to offer me work later this year, I would ask the company what they were doing to protect our health as workers. And if we were to get sick from this virus, would they be able to cover our medical costs and still pay us? Would they be paying us the same if we were to get sick? Will we just be allowed to rest there, recovering form being sick but not getting paid?

JRV: And if the company told you that there are no types of those protections but they still want to give you work, would you take the work and head back to the United States or would you stay in Mexico?

Misael: I would have to think about that. It’s not that easy now to just say yes to the work. I mean, if you aren’t healthy, you can’t work. And if you can’t work because you get sick and have no protections, you can’t get paid and send that money back to your family in Mexico. And you won’t have money to live there in the United States. Yes, the company should at least be able to share how they would protect us.

JRV: What are some of the basic conditions you would need to at least have you consider heading back to the United States to do the work that you have done?

Misael: We would need, for example, water and soap on a consistent basis. We would need hand sanitizer. And if we were to get sick, the company should at least cover for the time we lost from work while we were out sick. We would also need to be completely isolated from the rest of the population. At least, people who do come to see us out in the country would need to wear masks to visit the farm. We wouldn’t want the farm to get a virus contamination.

JRV: Do you have friends or fellow workers who are working on these farms right now?

Misael: I have some fellow workers who are about to finish up their work and head back to Mexico at the start of April.

JRV: Have they shared anything with you about the working conditions or about the virus?

Misael: I heard from two friends. One got sick in the throat but I don’t think it was because of the coronavirus. However, he did say that he was isolated on the farm and they put him in a place where he was living on his own, alone. He was isolated from the rest of the farm, but he didn’t work for two weeks. I don’t know if the company was covering his lost wages or his medical costs. I didn’t ask him about that. But he didn’t work for two weeks.

JRV: If you didn’t go back to work because there weren’t protections for you, how would that decision to remain in Mexico impact you?

Misael: It would be a difficult decision to stay if I had to stay. The situation in Mexico is bad as well. It would be a difficult decision for me. There might more a bit more money to make in the United States, but it would be risky. It’s a still a tough situation all around, especially for all us. Here’s hoping that we can get back to work soon and earn money for our work so we can all support our families.

This interview was facilitated by Jason Yarashes and Tonya Osinkosky from the Virginia Justice Project for Farm and Immigrant Workers at the Legal Aid Justice Center.