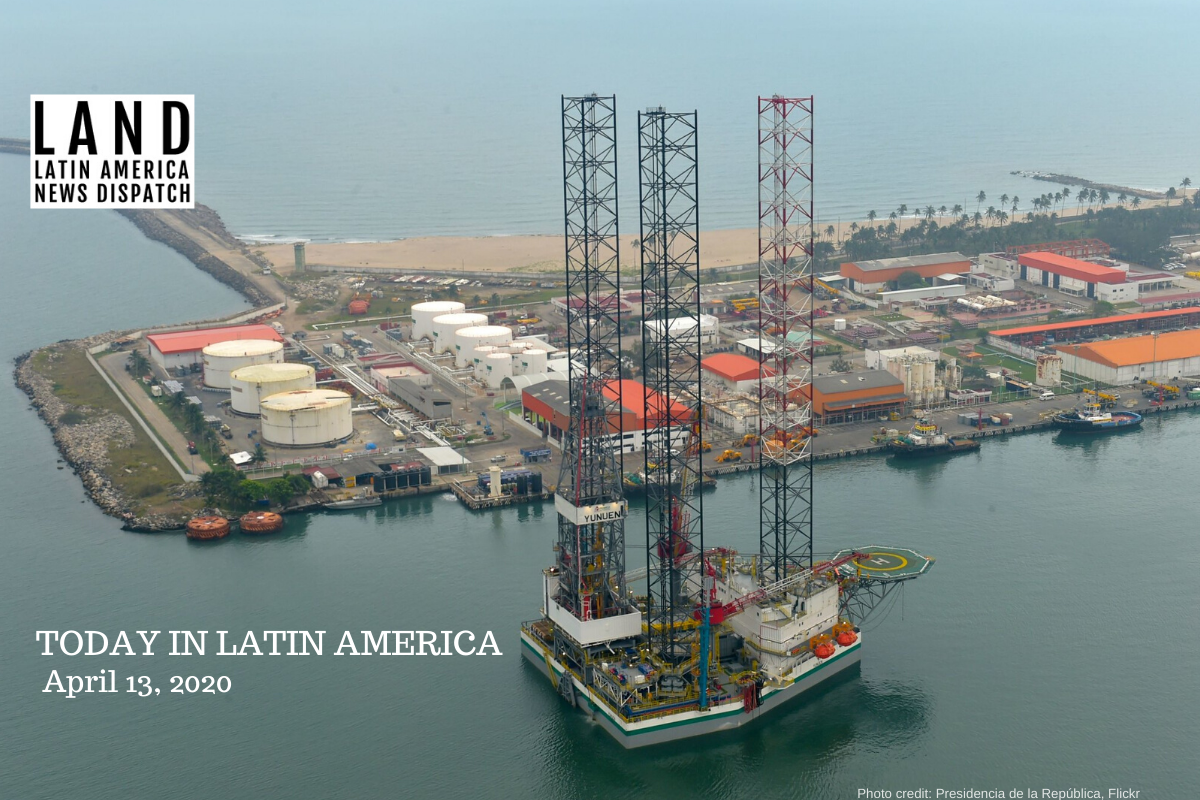 U.S.-MEXICO: The Organization of the Petroleum Exporting Countries (OPEC) and its allies reached a deal on Sunday to slash oil production 9.7 million barrels per day for the next two months. The deal aims to bring up oil prices after a crash brought on by the coronavirus pandemic and disputes between Saudia Arabia and Russia. The planned production cuts are the largest in OPEC’s history.

Mexico held out during the final days of negotiation and will only be required to cut 100,000 barrels, less than its proportional share. Bloomberg reports that Mexico will decide over the next two months whether to stay in the OPEC+ alliance. Andrés Manuel López Obrador has staked his presidency on reinvigorating Mexico’s state petroleum company, Pemex. Ratings agencies warn that Pemex is particularly vulnerable to the drop in oil prices.

President Donald Trump is being credited with brokering the final deal. In a call Thursday night, Donald Trump and López Obrador agreed that the U.S. would cut an additional 250,000 barrels and Mexico would cut 100,000.

BRAZIL: Brazil’s indigenous Yanomami community experienced its first COVID-19 related death on Thursday evening, after 15-year-old Alvanei Xirixana died in an intensive care unit in Boa Vista. Agência Brasil reports 24 coronavírus cases within Brazil’s large Indigenous community, of the 22,169 total confirmed cases in the country. Meanwhile, Human Rights Watch denounced President Jair Bolsonaro’s treatment of the pandemic on Friday, saying that he is “sabotaging the states’ and his own Health Ministry’s efforts to contain the spread of COVID-19 and putting the lives and health of Brazilians at grave risk.”

URUGUAY: Authorities evacuated 112 passengers on Friday from the Greg Mortimer, an Australian cruise ship, which has been docked off the coast of Uruguay since March 27. Uruguayan health officials had been monitoring passengers after 128 of the 217 people aboard the ship tested positive for the coronavirus. Friday’s evacuees included citizens of Australian and New Zealand, who were flown to Australia early Saturday. At least 83 crew members and 11 passengers, including six citizens of the United States, remained on board.

ECUADOR: In a televised address on Friday, President Lenín Moreno outlined an economic plan, in response to the devastating impact of the coronavirus and the collapse of two major oil pipelines. Moreno said that the country’s $65 billion in debt will be renegotiated. Companies earning more than $1 million annually will have to contribute 5 percent of their profits and individuals earning more than $500 a month will also be asked to contribute. Ecuador currently has 7,446 confirmed cases of the coronavirus.

REGION: U.S. Customs and Border Protection retained personal protective equipment, including gloves and face masks, on a shipment to the Cayman Islands, Barbados, and the Bahamas. The agency told the Miami Herald that it would hold shipments of the supplies and the Federal Emergency Management Agency would decide whether to allow their export. On April 3rd, President Trump gave the federal government more authority over scarce products like ventilators, masks, and gloves, including the ability to prevent supplies from leaving the U.S. Health officials in the Caribbean, who are preparing for an expected rise in coronavirus cases, said they are also trying to procure equipment from South Korea and China.

CUBA: Coronavirus has recharged the debate over whether to host Cuban doctors in Ecuador, Brazil, and Bolivia. The countries had cut their ties to Cuba’s medical diplomacy program in recent years, with encouragement from the Trump Administration andshifts in political leadership. Now, with COVID-19 straining health systems, Cuban doctors have traveled to 17 countries to provide care. Critics of the program say the Cuban government underpays and exploits its doctors, requiring them to work in unjust conditions.

PUERTO RICO: The U.S. Court of Appeals ruled Friday that Puerto Ricans may apply for Supplemental Security Income, after the government sued a U.S. citizen to recollect thousands of dollars in disability payments. José Luis Vaello Madero moved from New York to Puerto Rico in 2013 and collected benefits until 2016. The Social Security Administration’s lawsuit sought repayment of $28,000, arguing that it would be too expensive to extend the program to Puerto Rico and noting the island’s “unique tax status.” One of Vaello Madero’s lawyers told the AP that 700,000 people in Puerto Rico would be eligible for SSI, but that he expects the federal government to take the case to the Supreme Court.

GUATEMALA: Teachers have been struggling to provide distance learning to students, with only 17 percent of households connected to the internet and over half of those concentrated in Guatemala City. In rural communities, the only way to continue lessons is to leave textbooks with families, though for some schools, books are also scarce. Some educators expect to extend the school year later into the year to make up for lost time. Classes have not met in person since mid-March, when President Alejandro Giammattei closed schools until today, April 13.

MEXICO: The state of Baja California shut down a U.S.-owned plant on Friday. Governor Jaime Bonilla Valdez said the company, Smiths Medical, declined to sell ventilators to Mexico, but stayed open under the argument that its products are essential. Bonilla said by refusing to sell to the local market, the plant was not providing an essential service to Mexico. Smiths Medical, which is based in Minneapolis, Minnesota and owned by a British parent company, declined to comment on the decision. Other representatives from the industry have argued that the plant is allowed to import raw materials tax-free because it exports all of its products.

MEXICO: Interns and resident doctors from a public hospital in a suburb of Mexico City wrote a letter to the country´s health secretary that 19 among their group of 26 have tested positive for COVID-19. They asked for more personal protective equipment, which they said they had to buy themselves, as well as better training. Zoé Robledo, director of Mexico public health system, said the claims of infection were “incorrect,” distinguishing them from a public hospital outbreak in the northern town of Monclova, where two providers died. In Cabo San Lucas, doctors are asking for donations after 42 employees became infected.