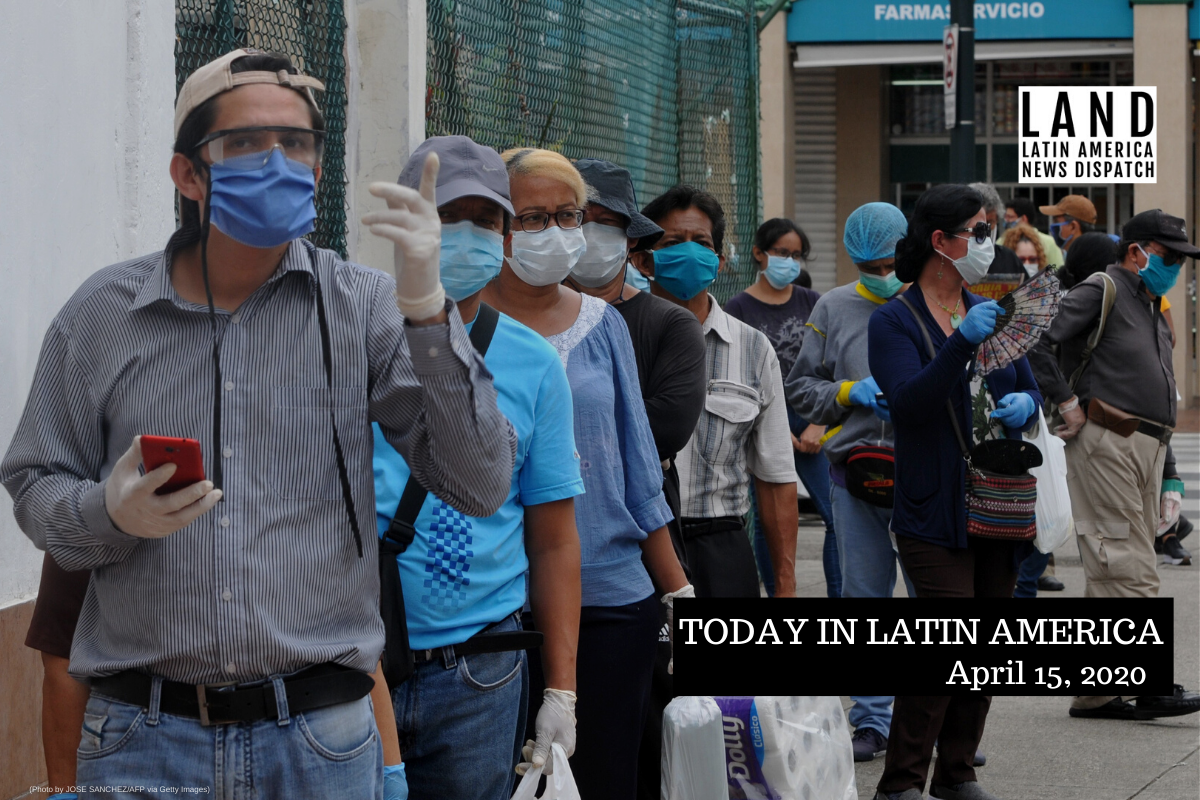 People queue outside a pharmacy in downtown Guayaquil, Ecuador, on April 15, 2020 during the novel coronavirus COVID-19 pandemic. Guayaquil is one of the COVID-19 worst-hit cities in Latin America. (Photo by JOSE SANCHEZ/AFP via Getty Images)

REGION: In its World Economic Outlook report, the International Monetary Fund (IMF) forecast the worst economic contraction on record in Latin America and the Caribbean. According to IMF estimates, the region will experience a 5.2% contraction in 2020 due to the spread of the coronavirus. The estimates mirror similar projections the World Bank released on Sunday. The Bank recommended increased social assistance programs in anticipation of a 4.6% drop in regional economies. Such a fall would be the worst seen since the IMF’s founding in 1980.

The IMF also announced country-specific estimates, including a 5.3% plunge in Brazil, the deepest one-year decline in over a century, and a 6.3% fall in Ecuador. Mexico is also expected to face a 6.6% contraction, the most severe among major countries in the region except Venezuela. The report expressed “extreme uncertainty” surrounding broader global growth in the face of a possible economic depression.

BRAZIL: Rio de Janeiro Governor Wilson Witzel tested positive for the coronavirus on Tuesday. He made an announcement on Twitter, sharing a video saying that he hadn’t been feeling well since Friday. Witzel said that he will keep working in the Laranjeiras Palace, abiding to medical and public health recommendations. Witzel has challenged President Jair Bolsonaro’s views on social isolation and supported a lockdown in Rio de Janeiro in order to contain the number of cases. The State of Rio de Janeiro has 3,221 confirmed cases and 191 registered deaths due to COVID-19.

COLOMBIA: Authorities discovered widespread corruption involving inflated prices for food and medical supplies, according to comptroller Carlos Felipe Cordoba. The country has detected nearly $20.6 million of supposed overcharges in 8,100 contracts signed by mayors and governors’ offices since the state of emergency announced mid-March. On the whole, graft costs the country $12.9 billion a year—over 4% of gross domestic product according to the General Comptroller’s office.

GUYANA: In a departure from other regional trends, the International Monetary Fund predicted that Guyana will be the only country in the Americas to experience any economic growth in 2020 during the COVID-19 pandemic. The IMF expects that Guyana’s economy will still grow 53%, down from 86% forecasted in October. Major U.S. and Chinese energy companies recently began investing in Guyana as the coastal nation began offshore oil production in fields expected to contain 8 billion barrels of crude resources.

GUATEMALA: The United States resumed deportation flights to Guatemala on Monday, after pausing flights for a week due to concerns of further spreading the coronavirus. Although the Guatemalan government requested that the U.S. only send 25 passengers on each plane, the first two flights arrived Monday with 76 and 106 deportees each.

Today I announced the Administration’s intent to continue additional targeted U.S. foreign assistance for El Salvador, Guatemala, and Honduras. As they combat illegal immigration to the U.S., we are committed to helping them build secure, prosperous futures for their citizens.

The same day, U.S. Secretary of State Mike Pompeo announced that the country would continue sending aid to Guatemala, El Salvador and Honduras.

MEXICO: Doctors and nurses led a Mexico City protest, demanding adequate supplies for health workers on the front lines against the coronavirus. The Institute of Social Security reported that 535 medical personnel have been infected. The IMSS General Hospital in Monclova suffered one of the worst outbreaks in Mexico with at least 51 staff infected and three dead. Hospital managers reportedly told health providers to “avoid using face masks” to prevent panic and because of a shortage of protective material.

MEXICO: The United Nations released a communique condemning the murder of the third environmental activist killed in Mexico this year. Adán Vez Lira was murdered by hitmen while driving through his community on April 8th. Vez Lira was well known for his conservation and environmental work in this state of Veracruz and his hometown of Actopan.