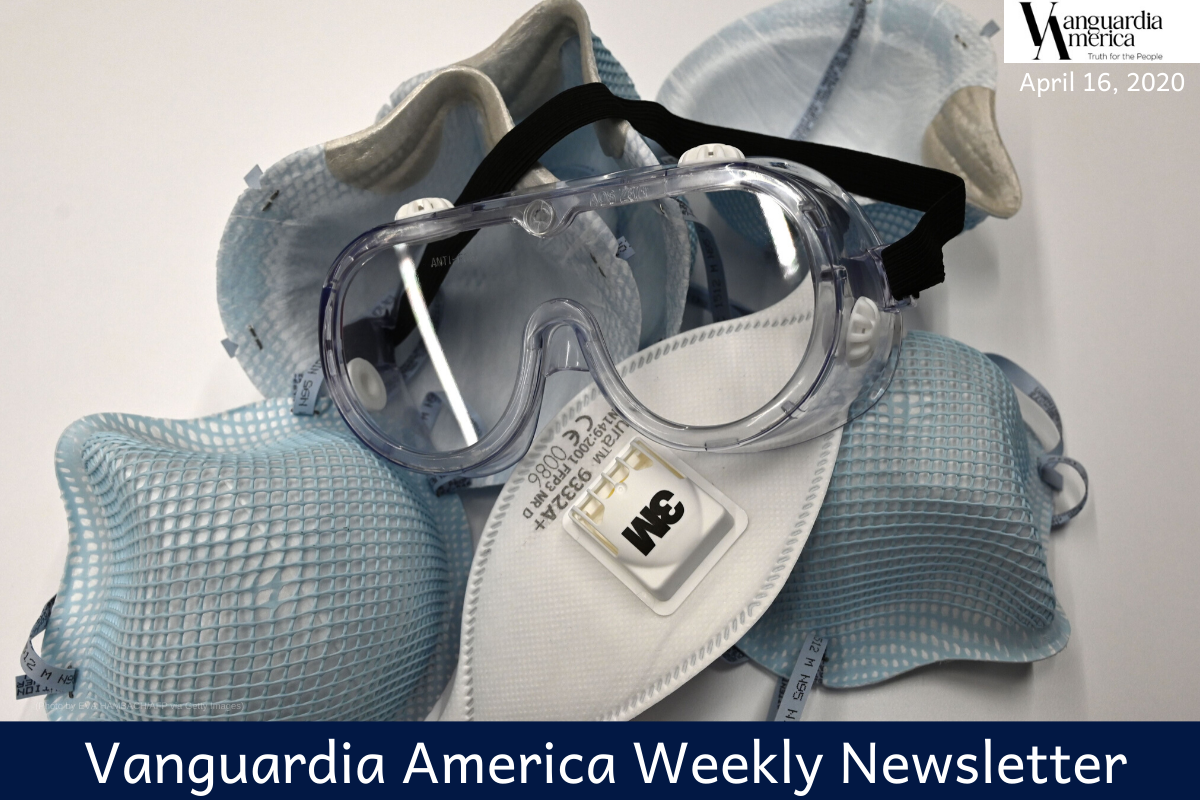 In this illustration dated February 26, 2020, protective N-95 face masks lie on a table at an office in Washington, DC. (Photo by EVA HAMBACH/AFP via Getty Images)

A 64-year-old Latino man who worked at a meatpacking plant in South Dakota is the first person to die as part of the single largest cluster of coronavirus cases in the nation. In recent weeks, Latino workers at meatpacking plants across the country have been infected by the virus. For instance, nearly 650 workers at a Sioux Falls meatpacking plant owned by Smithfield Foods, according to state health officials, have now tested positive for COVID-19.

The plant, which has a large number of Latino workers, has been ordered closed indefinitely. South Dakota has no stay-at-home order.

On Wednesday, Augustine Rodriguez, a worker at the Smithfield plant, died of complications related to the coronavirus. News of his death was circulated in a Facebook post attributed to his wife, Angelita Rodriguez.

“Today is a sad day. My friend and husband, Agustín Rodríguez, died today,” the post reads in Spanish and English. “He worked at Smithfield. Please send prayers to his wife, Angelita, and his sister-in-law, Ana.”

“Mr. Rodriguez, an immigrant from El Salvador who cut pork feet at the factory, was active in his church; he lived in a trailer but was in the process of buying a home,” the New York Times reported on Thursday.

Officials from the Centers for Disease Control and Prevention arrived Wednesday in South Dakota to assist the state in its response to the massive outbreak. The COVID-19 cases at the plant already account for more than 50 percent of South Dakota’s coronavirus cases. As of Sunday, South Dakota health officials had recorded six deaths and more than 1,100 confirmed cases of the disease.

In Colorado, three Latino workers at a JBS meat processing plant have died in the past week of the virus, according to NBC Latino. At least 40 employees at the plant have tested positive for the virus and 14 have been hospitalized, according to local news reports. The plant, located in Greeley, Colorado, is closed until April 24. One of the JBS employees who died, 78-year-old Saul Sanchez, worked there for 30 years. His daughter, Beatrice Rangel, in a conference call with reporters this week accused JBS of failing to protect its workers.

In Iowa, two workers at a Tyson Foods plant have died, according to Des Moines Register. The names of the workers have not yet been released. The plant was closed on April 6.

All told, more than a dozen meatpacking plants in Iowa, Colorado, South Dakota, Missouri, Wisconsin and Pennsylvania have been temporarily shuttered because of the spread of the coronavirus.

“These are essential frontline workers,” said Domingo Garcia, president of League of United Latin American Citizens (LULAC), in a telephone conference call with NBC Latino reporters. “They are just as important as doctors and nurses, but they are not being treated that way.”

The spread of coronavirus among workers with meatpacking jobs comes as health officials across the country report that African Americans and Latinos are at greater risk of contracting COVID-19 than the general population since many work in so-called front-line blue-collar or service jobs that are deemed “essential.”

African Americans and Latinos are also at greater risk of dying if they catch the virus because of a prevalence of underlying medical conditions such as hypertension and diabetes. Latinos are also the least likely in the nation to have health insurance.

Many who work on the frontlines in the meatpacking industry are Latino. According to a 2017 report by the American Public Health Association, “Agricultural and food production employers rely heavily on immigrants and people of color for their workforce…In meatpacking and poultry processing, 34% of the workforce is Hispanic.”

In Iowa, Latinos make up 17.4% of the confirmed cases of the coronavirus, but only  6% of the state population.

The UnidosUS Action Fund will press the House and Senate in the coming days and weeks to include aid for immigrants in the next round of stimulus funding aimed at shielding the U.S. economy from the crushing impact of COVID-19.

“The novel coronavirus does not care about a person’s immigration status, economic status or access to health care,” said Orson Aguilar, executive director of UnidosUS Action Fund. “Immigrants, as well as all taxpayers, must have access to health care treatment and services, including testing and treatment for COVID-19, without fear of bankruptcy, deportation or any other consequences.”

Rep. Alexandria Ocasio-Cortez (D-NY) has endorsed former Vice President Joe Biden, saying, “the stakes are too high when it comes to another four years of Trump.” Nevertheless, when asked about a sexual assault allegation levied by a former Biden staffer, she said, “I think it’s legitimate to talk about these things. And if we want, if we again want to have integrity, you can’t say, you know—both believe women, support all of this, until it inconveniences you, until it inconveniences us.” A spokesperson for the Biden campaign has vehemently denied the assault charges. Biden has not responded directly to the allegation.