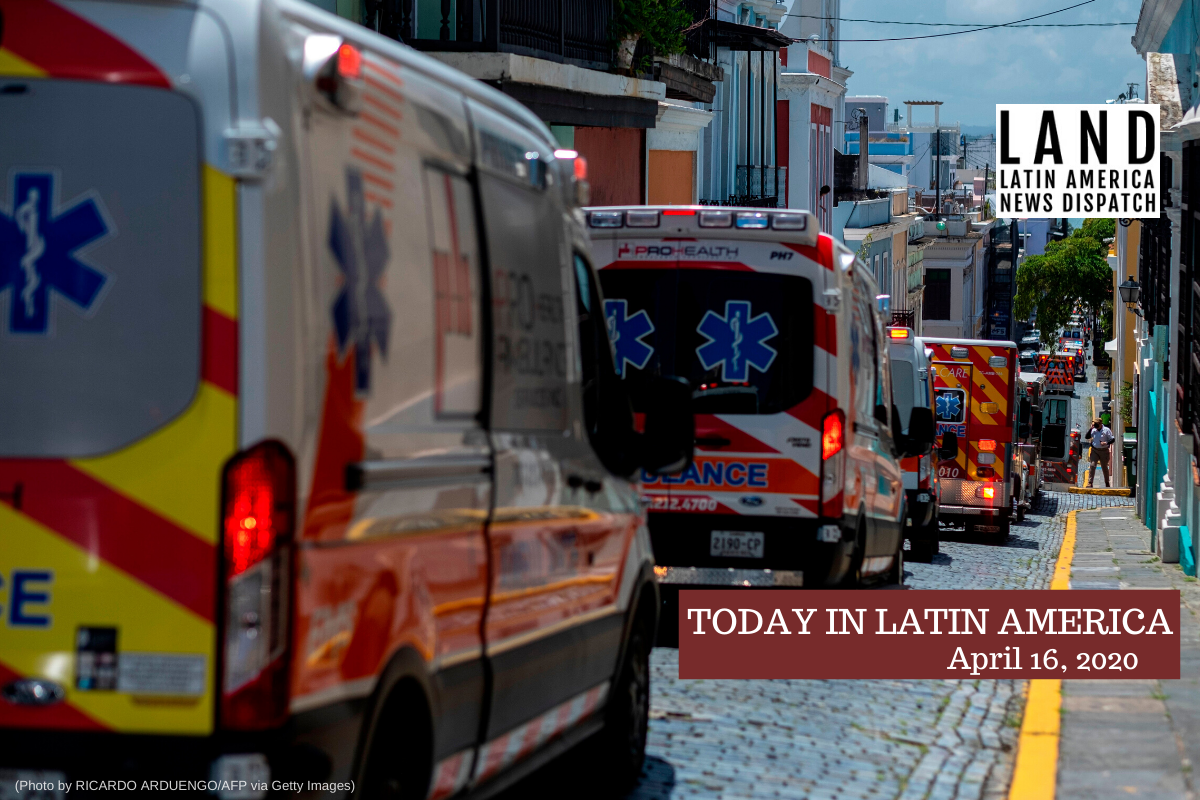 Hundreds of private and municipal paramedics protest in their ambulances through Old San Juan and driving in front of the governor's mansion in San Juan, Puerto Rico on April 15, 2020. (Photo by RICARDO ARDUENGO/AFP via Getty Images)

PUERTO RICO: Dozens of cars on Wednesday formed a caravan in front of the public television station WIPR as protesters denounced alleged corruption in the government’s response to COVID-19 and demanded more testing for the island. Later the same day, emergency medical technicians staged their own caravan protest through Old San Juan, which culminated in front of the governor’s mansion, to demand that they be included in the government’s economic relief package. These are the first coronavirus-related protests on the island since Gov. Wanda Vázquez instituted a curfew and lockdown on March 15.

The protests follow a federal investigation into members of Vázquez’s administration who tried to purchase $38 million worth in coronavirus testing kits from a construction company with no experience in manufacturing medical products and ties to Vázquez’s New Progressive Party. The government has also faced criticism for not allowing journalists to participate in coronavirus briefings televised by WIPR.

As of Wednesday, the island had only performed around 9,000 tests, the lowest testing rate per capita in all U.S. states. The Department of Health has confirmed 974 cases and 51 deaths.

BRAZIL: A second Brazilian governor said he tested positive for COVID-19, in an announcement that came shortly after Rio de Janeiro Gov. Wilson Witzel tweeted that he had contracted the novel virus. Helder Barbalho, governor of the state of Pará, tweeted that he was an asymptomatic carrier of the coronavirus and urged Brazilians to stay home, despite a lack of concern from President Jair Bolsonaro.

Barbalho previously stated he would not follow Bolsonaro’s recommendations and would instead choose to save lives over “sparing the economy.”

BRAZIL: Secretary of Health Vigilance Wanderson de Oliveira submitted his resignation Wednesday and told his team that President Jair Bolsonaro would soon fire Health Minister Luiz Henrique Mandetta. In an internal letter shown to Reuters, Oliveira confirmed rumored statements by Mandetta that he would soon be forced out of his position. Mandetta, however, said he did not accept Oliveira’s resignation, and the two men appeared together at a press briefing later that day. Brazil’s Health Ministry has been at odds with the president over the course of the coronavirus pandemic, accusing the president of “downplaying” the virus. Brazil’s agriculture ministry also stated yesterday that the government was extremely behind in COVID-19 testing due to a lack of testing material, despite many lab facilities made available by the ministry.

VENEZUELA: Human Rights Watch released a statement yesterday urging the U.S. to recognize Venezuelans as a protected group due to “higher risks” associated with the spread of COVID-19 in Venezuela. The organization recommended applying Temporary Protected Status (TPS) to Venezuelans residing in the U.S. and halting all deportations until the spread of the coronavirus can be contained. Venezuela currently has 197 confirmed cases and 9 deaths, but many expect the number to be higher due to a lack of testing. At the same time, Venezuela received its first shipment of water tankers from Mexico, in a new deal that will move millions of barrels of crude oil out of Venezuela in exchange for drinking water and food, despite U.S. sanctions.

DOMINICAN REPUBLIC: The Organization of American States (OAS) found no evidence of fraud or vote tampering in the Dominican Republic’s Feb. 16 municipal elections. In a 45-page report of their audit, the OAS faulted the country’s Central Electoral Board (JCE) and its software for the errors that occurred on election day, which was called off four hours into voting after voters began reporting errors in the new electronic voting system. Taking these findings into consideration, the OAS advised the JCE against using the same software in the upcoming presidential and congressional general elections postponed for June 5 amid the coronavirus crisis on the island. The Dominican Republic has over 3,600 confirmed cases as deaths top 180.

EL SALVADOR: A new measure went into effect in El Salvador on Tuesday that declares the entire country as an “epidemic area subject to sanitary control.” Under the national obligatory quarantine measure, all citizens are required to allow officials from the Ministry of Health into their homes to evaluate their sanitation measures. The decree also mandates that those who do not abide by the proclamation be subject to a medical exam, and those who health officials deem to be a suspected case of coronavirus will be placed under a 30-day controlled quarantine. Legal experts have pointed out that aspects of the executive order violate the country’s constitution. El Salvador has 159 positive cases and 6 deaths.

NICARAGUA: After disappearing from the public eye for more than a month, President Daniel Ortega made a televised appearance recapping the ways COVID-19 has affected the country. The leader said that only one person has died from the coronavirus in Nicaragua and that the country’s three reported cases were “imported.” Currently, no stay-at-home order has been implemented in the country, and classes are scheduled to resume on April 20. Up until Wednesday, Ortega was the only Latin American leader to not make an announcement about how his government plans on handling the spread of COVID-19, according to the Human Rights Watch. Rumors on social media speculated that Ortega was self-quarantined due to illness.

MEXICO: An overflow of COVID-19 cases has led hospitals in Mexico to prepare to decide who to save. A guide issued by the General House Council which outlines how to allocate medical resources recommends prioritizing younger patients over the elderly because of supply shortages. Seriously ill patients will not receive the same amount of medical care. Although specific protocols have not been set, hospitals are determined to save those who can live longer.

MEXICO: President Andrés Manuel López Obrador said that health personnel who help fight against the coronavirus will be guaranteed permanent work. López Obrador claimed that previous administrations have left a large deficit of personnel in public health institutions. The hiring of workers will take place until next week, as López Obrador warns that Mexico is facing the “most critical moment” of the pandemic. Pharmacy owners are beginning to join the cry for help as well.

U.S.-MEXICO BORDER: Supplies for the construction of a coronavirus field hospital are being kept near the U.S.-Mexico border. Mexican authorities allegedly approved the construction of a 20-bed field hospital on April 2, but a trailer with equipment is stuck in Brownsville, Texas. The trailer is filled with X-ray machines, heart monitors, generators and other supplies, according to Global Response Management, the nonprofit leading the project. After the U.S. banned exports of key protective medical gear, the nonprofit removed gloves and masks from the trailer. Global Response is still awaiting a letter from the Matamoros mayor’s office to certify that the shipment can be approved by Mexican customs.