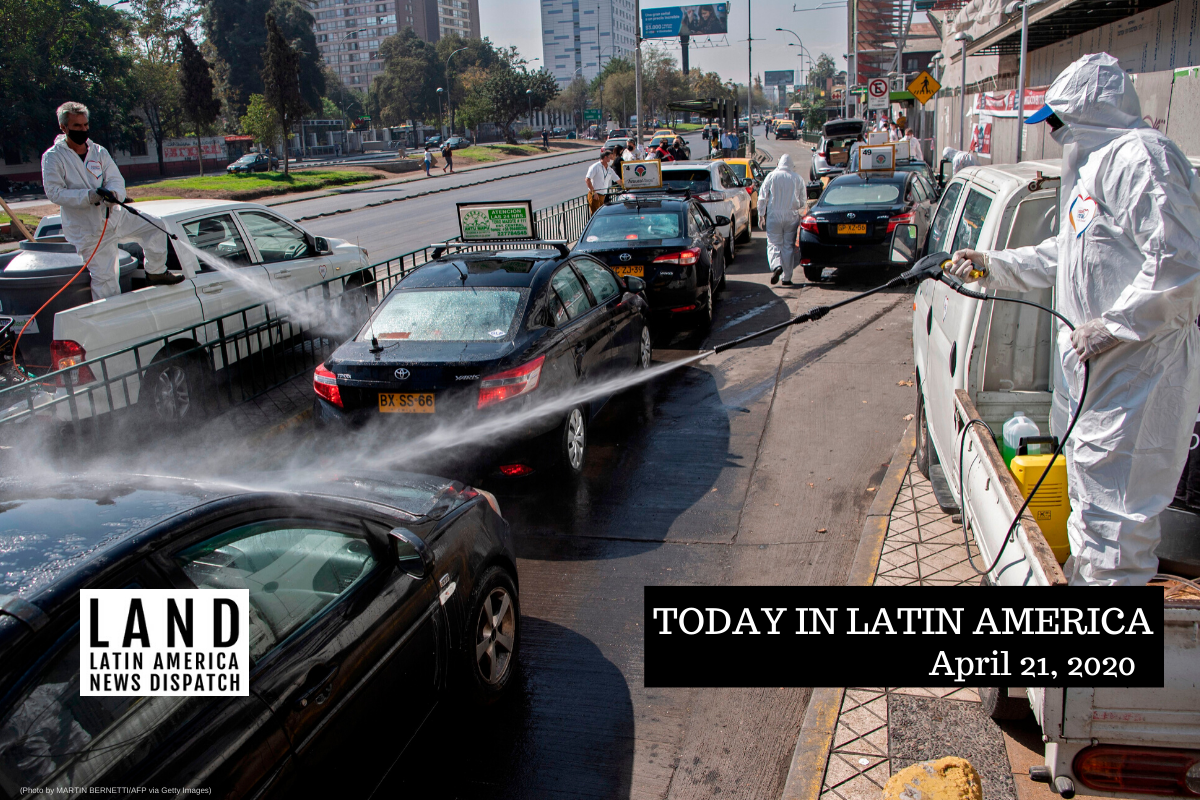 Sanitation workers disinfect taxis as a preventive measure against the spread of the novel coronavirus COVID-19 in Santiago, on April 17, 2020. (Photo by MARTIN BERNETTI/AFP via Getty Images)

CHILE: Health officials confirmed plans yesterday to be the first country to issue coronavirus “immunity passports,” which would allow individuals who have recovered from COVID-19 to go back to work. Health Ministry Undersecretary Paula Daza said that 4,600 people have recovered from the deadly virus. According to officials, those citizens can “help the community enormously” by getting back to work. Chile has tested more people for the coronavirus than any other country in Latin America.

The Chilean Immunological Society requested the government consult them before announcing such measures. But the government did not, according to the Washington Post. It is unknown whether long-term immunity to COVID-19 exists. There have been reported cases of reinfection and the virus mutates quickly. However, other countries are beginning to consider immunity certifications.

BRAZIL: President Jair Bolsonaro said yesterday that he wanted the quarantine to end this week. Bolsonaro claims that social distancing measures have not worked and the country requires a less restrictive approach. Some states, like São Paulo and Río de Janeiro already have strict isolation measures in place amid the rising number of infections.

COLOMBIA: A prison riot sparked by coronavirus fears left one dead and 13 injured in the city of Quibdó on Sunday. The prison is located in Colombia’s impoverished Pacific Coast that has a predominantly Afrocolombian population. According to reports, the inmates rioted due to the risk of coronavirus infection with the arrival of new inmates. Quibdó’s hospital restricted cases only to surgeries and obstetrical emergencies on Saturday, after three staff tested positive for coronavirus. Three penitentiaries have confirmed cases of the coronavirus. Colombia extended its national quarantine measures until May 11.

PERU: Riot police have blocked a major Lima highway as hundreds of people attempt to leave the city despite a stay-at-home order. Families tried to leave Lima, where costs of living are high and many people now have no work opportunities. President Martín Vizcarra instituted a quarantine and stay-at-home order about six weeks ago. Peru has the second highest number of confirmed coronavirus cases in Latin America, after Brazil, with 16,325 confirmed cases according to data from John Hopkins University.

PUERTO RICO: The territory’s administration continues to face criticism for its response to the pandemic. Last week, the island confirmed the death of its youngest victim, a 29-year-old man who, according to his father, was only tested for the virus on his third visit to the emergency room. After that incident, Health Secretary Lorenzo González said the number of people infected in the territory is not precise because positive cases may have been registered twice. He also said a private company was responsible for disconnecting the power of a trailer used to refrigerate food that was intended for distribution to people in need during the crisis.

NICARAGUA: The country’s 1.7 million public school students went back to class yesterday, in spite of the coronavirus pandemic, ending two weeks of vacations. The first day back was marked by low attendance and students being dismissed early. Last week, a Nicaraguan human rights organization criticized President Daniel Ortega’s government for not having a strategy to fight the spread of the novel coronavirus and called Ortega “illogical” and “irresponsible.”

PANAMA: Around 1,500 undocumented migrants headed towards the United States were put in lockdown in the small Panamanian town of La Peñita, which is close to the Colombian border. The local authorities decided to detain the group because 17 people tested positive for coronavirus, according to an anonymous AFP source. Red Cross personnel working on site had to leave and enter quarantine. Now, the stranded immigrants are living in a jungle camp of 50 local families, raising concern about the camp conditions. Authorities are also worried there may be more infected people among the group.

MEXICO: Tamaulipas state officials said that sixteen migrants had tested positive for the coronavirus. Fourteen of the migrants were staying at a shelter in the border town of Nuevo Laredo, where a man who later tested positive arrived after his deportation from Houston, Texas. Individuals in the group originally traveled from elsewhere in Mexico, Guatemala, Honduras, Cuba, and Cameroon. Thousands of migrants are waiting in Tamaulipas for their hearings in U.S. immigration court. Migrants detained in Mexico whose lives are threatened by the coronavirus may be released after a district court in Mexico City ordered the Mexican government to give them temporary status. The ruling from Friday also directs officials to improve access to health care, hygiene, and communication with loved ones for those remaining in detention.

MEXICO: AMLO asked drug cartels to stop giving aid yesterday, as organized crime groups around the country try to win over communities with supplies like food and toilet paper. The daughter of jailed drug lord Joaquin Guzmán, Alejandra Guzmán, posted a Facebook video of herself and other women putting together “Chapo” packages to hand out to Mexicans. Los Viagras, another group, has reportedly been asking businesses for donations to help distribute aid. These groups can provide protection when the state does not, but can also subject communities to extortion and violence. While the coronavirus lockdown has impacted cartels economically, they may be taking an opportunity to gather local support.

UNITED STATES: The Pentagon plans to ask Mexico to reopen factories that supply materials for U.S. weapons manufacturers. Companies have outsourced manufacturing south of the border in recent years, seeking lower labor costs and duty-free trade. The pandemic has slowed weapons manufacturing but not stopped it altogether; factories remained open with exceptions in Pennsylvania and Washington. While some factories in Mexico have closed, workers and families linked to Northern Mexico’s manufacturing industry have protested that companies put their employees at risk.