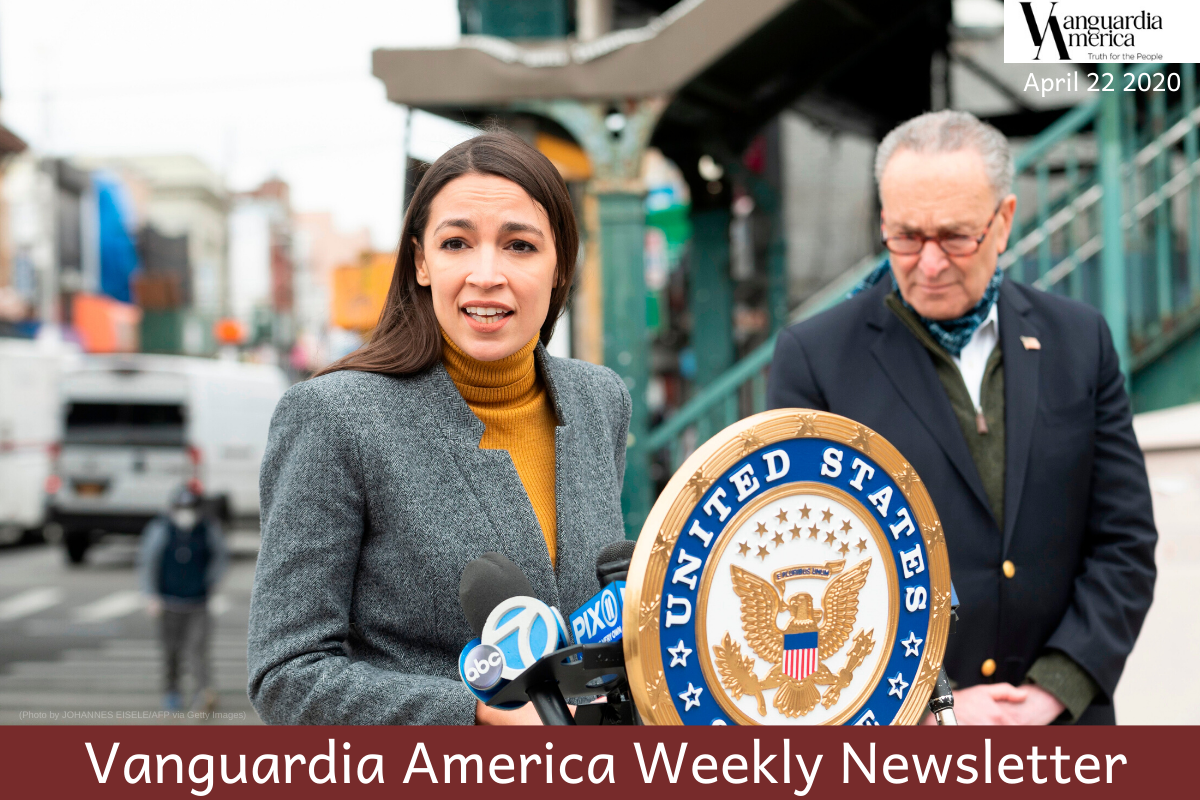 In the epicenter of the world’s coronavirus pandemic, part of New York’s 14th Congressional District, led by freshman Democrat Alexandria Ocasio-Cortez, has recorded the highest per capita incidence of COVID-19 cases in the city, according to federal health data.

The 14th District includes portions of the Bronx and Queens. Data for the Bronx borough show the per capita coronavirus infection rate is 2.05 per 100 people, with Queens at 1.65 per capita, while Staten Island, a borough farther south, has recorded 2.3 cases per 100 people.

In an interview with MSNBC’s Rachel Maddow Tuesday night, Ocasio-Cortez said,  “In my district and in New York City… we’ve had more deaths than 9-11.”

While New York hospitals are finally starting to get the protective health gear that doctors and nurses need, the congresswoman said home health care aides, nursing home workers and health care attendants still do not have the Personal Protective Equipment (PPE) they need to keep from getting infected. Deaths tied to COVID-19 have skyrocketed in nursing homes nationwide. In one Bronx nursing home, at least 45 people have died from COVID-19. Statewide, some 2,700 nursing home residents have been killed by the coronavirus, say health authorities.

In her interview with Maddow, Ocasio-Cortez called the just approved expansion of the latest federal stimulus bill “small potatoes,” saying it falls far short of addressing the true needs of the nation. The $480 billion dollar bill will likely be approved in the House on Thursday.

Ocasio-Cortez added that much more needs to be done to help workers, the poor and local and state governments make it through the coming months. She wants recurring stimulus checks sent to Americans in lieu of the one-time $1,200 payment Congress authorized in March for most adults, though millions of people, including millions of undocumented immigrants, did not get a check.

U.S. Meatpacking Plants, Where Latinos Are A Large Part of the Workforce, See Big Jumps In COVID-19 Cases

A growing number of meatpacking plants across the country are reporting many more coronavirus cases among their workers, according to state and national health officials.

Latinos make up about 34% of those who work on the frontlines in the meatpacking industry, according to a 2017 report by the American Public Health Association.

Nearly 900 cases of coronavirus are now tied to a pork plant owned by Smithfield Foods in Sioux Falls, South Dakota. A spokesman for the plant this week blamed the plant’s “large immigrant population” for the virus’ rapid spread, according to BuzzFeed News.

“Living circumstances in certain cultures are different than they are with your traditional American family,” the Smithfield spokesperson told BuzzFeed.

At a recent press conference, South Dakota Governor Kristi Noem, said that allegedly “99%” of the infections were happening at the workers’ homes and not inside the plant, though health officials report 725 workers from the plant are infected and another 143 infections tied to Smithfield workers have occurred outside of the plant. All told, the plant accounts for half of the coronavirus cases in South Dakota, which has not implemented a stay-at-home plan.

Two Smithfield workers in Sioux Falls have died since the outbreak began. The first person to die was 64-year-old Augustine Rodriguez, an immigrant from El Salvador.

Meatpacking facilities in multiple states, meanwhile, have been shut down because of coronavirus outbreaks among plant workers.

At the JBS USA plant in Greeley, Colorado, four workers have died, according to Contact7, a Denver-based television station. Three of the workers who died were Latino. More than 100 workers from the plant have tested positive for coronavirus. A report on the Contact7’s website Wednesday alleged that a plan by the plant’s owners to test its 6,000 workers was dropped soon after it began. Contact7 reports that “ between 40% and 80% of managers/supervisors tested positive on the initial day of testing and those results prompted JBS to end the testing program.”

Sylvia Martinez, speaking for the advocacy group Latinos Unidos of Greeley, told Contact7, “We can only assume the reason they stopped testing is they don’t want the numbers to come out, it’s bad PR.”

JBS has not commented on the report by Contact7. Meanwhile, more than 230 coronavirus cases have been tied to a JBS plant in Grand Island, Nebraska.

At a White House press briefing earlier this month, after acknowledging the problems at the JBS plant, Vice President Mike Pence said, “Our team is working with the [Colorado] governor to ensure that we flow testing resources.”