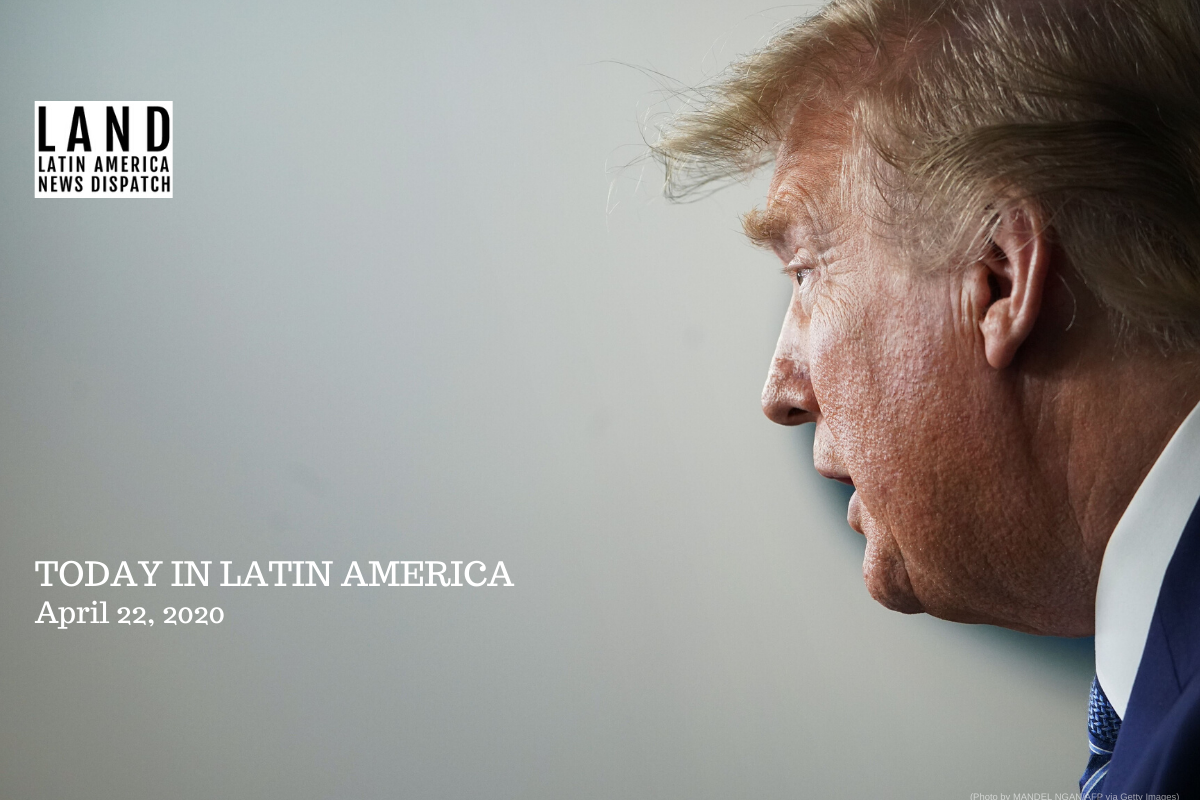 US President Donald Trump speaks during the daily briefing on the novel coronavirus in the Brady Briefing Room of the White House in Washington, DC on April 21, 2020. (Photo by MANDEL NGAN/AFP via Getty Images)

UNITED STATES: President Donald Trump will sign an executive order today pausing immigration to the U.S. for 60 days. Trump tweeted the decision to “stop immigration” late Monday night, calling the spread of the coronavirus an “invisible enemy” that mandated the conservation of medical supplies and the protection of American jobs.

In light of the attack from the Invisible Enemy, as well as the need to protect the jobs of our GREAT American Citizens, I will be signing an Executive Order to temporarily suspend immigration into the United States!

Temporary foreign workers, the largest source of immigration into the country, were deemed essential workers and are excluded from the immigration pause.

The executive order will largely halt the issuing of permanent residency visas, or green cards, and does not apply to healthcare and other essential workers. It is set to be reviewed after 60 days and may be extended based on “economic conditions,” according to the President. Many argue that the halt of immigration and a rise in deportations will only exacerbate the virus’ impact.

Trump has already taken advantage of the coronavirus to block asylum applicants at the border, including children. While the president tries to stop immigrants from entering the U.S., deportations to Latin American countries, namely Guatemala, have been spreading the virus.

CHILE: Police broke up an anti-government protest in the Plaza Italia in Santiago on Monday night and arrested 14. The exact number of people in attendance is still not clear, however, pictures shared on social media appeared to show that protesters were maintaining social distancing recommendations. Police forces defended the arrests citing public health laws. The Chilean government prohibited gatherings of more than 50 people and have enforced evening curfews since the onset of the coronavirus pandemic.

VENEZUELA: Supporters of President Nicolás Maduro and opposition leader Juan Guaidó have begun exploratory talks to address growing instability amid COVID-19. Sources on both sides told reporters that the group discussed public health concerns, hyperinflation, fuel shortages and U.S. sanctions. No official agenda for the talks has been released, and it is still unclear when they began. For weeks, foreign governments, including the U.S., and activists in Venezuela have urged the two sides to call a truce and institute a transitional government.

HAITI: Confirmed coronavirus cases remain low in Haiti, at 54 active cases and three deaths. However, government officials fear that deportation flights from the United States could facilitate the spread of the virus. Haiti was scheduled to receive 129 deportees yesterday, just one day after Prime Minister Joseph Jouthe confirmed that three migrants previously returned to Haiti from the United States had tested positive for the virus.

PUERTO RICO: Puerto Rican attorneys have begun filing cases to free their clients from prison, after a U.S. Supreme Court ruling on Monday banned non-unanimous jury verdicts. Officials at Puerto Rico’s Association of Attorneys told the Associated Press that the ruling likely also applies to the territory. In its decision, the Supreme Court referred to Louisiana and Oregon, where non-unanimous jury verdicts can convict defendants of serious crimes. However, Puerto Rico’s constitution currently allows for non-unanimous verdicts in certain criminal cases.

GUATEMALA: Deputy ministers Rodolfo Galdámez and Héctor Marroquín were fired from the Guatemalan Ministry of Health Monday, possibly in relation to an ongoing corruption investigation. The Presidential Commission Against Corruption also filed findings with the Special Anti-Corruption Prosecutor’s Bureau on Monday, showing that eight health officials conspired to commit fraud during the coronavirus pandemic. Although the findings did not name suspects, anti-corruption commissioner Óscar Dávila said two officials had already been fired.

MEXICO: The Senate passed an amnesty law on Monday for first-time nonviolent offenders intended to alleviate an overpopulated prison system, and to lower the risk of a coronavirus outbreak among prisoners. The legislation is expected to benefit 2,600 inmates convicted of crimes like abortion, non-violent robbery and petty drug possession. The bill will still need to be signed by President Andrés Manuel López Obrador.

MEXICO: The government announced a $31 billion stimulus package on Tuesday as the coronavirus pandemic enters what officials call “Phase 3.” The Bank of Mexico’s stimulus package includes $10 billion in financing for commercial banks to lend to businesses and individuals as well as reduced borrowing costs. At the same time, Deputy Health Minister Hugo López-Gatell said the transmission of the virus is reaching its “most dangerous phase” and recommended a further reduction of movement, despite growing pressure by the United States to reopen industries.