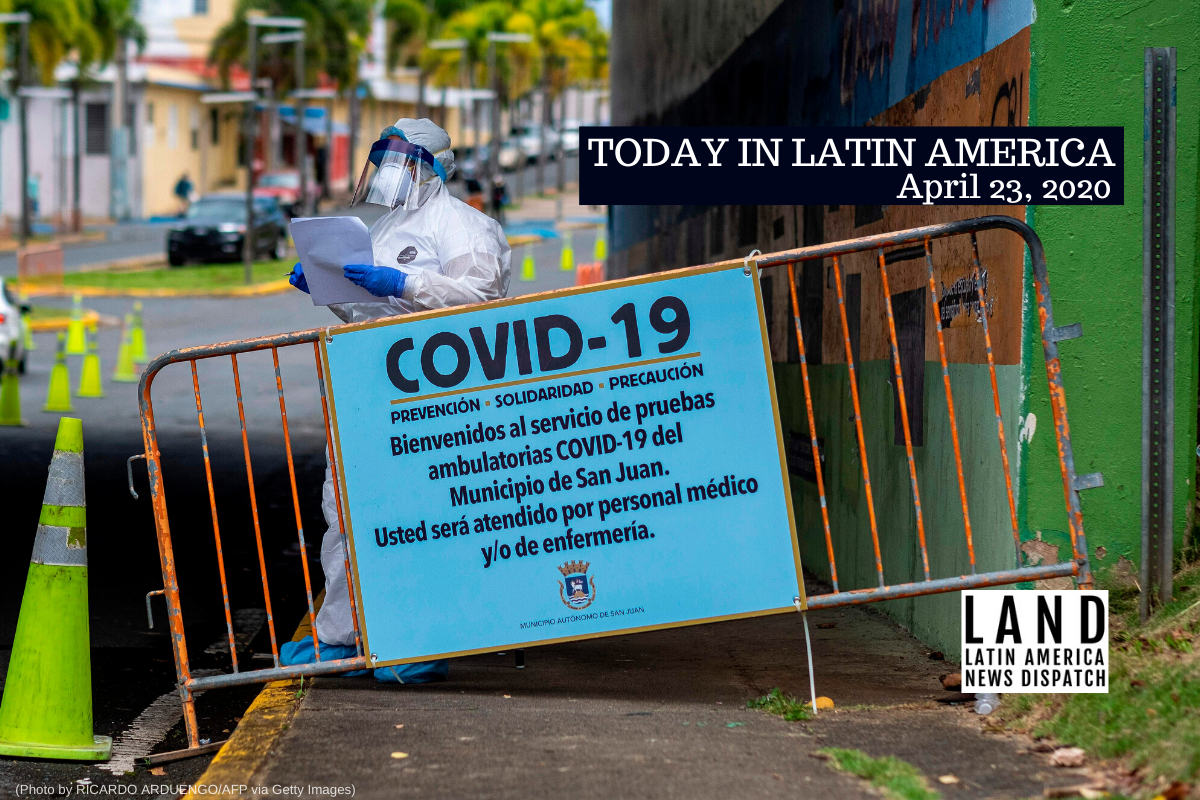 A medical personnel stands at the entrance of a municipal COVID-19 drive-thru testing site in San Juan, Puerto Rico on March 25, 2020. (Photo by RICARDO ARDUENGO/AFP via Getty Images)

PUERTO RICO: Governor Wanda Vázquez signed an executive order on Wednesday granting hospitals and medical personnel civil immunity from damages due to claims stemming from alleged medical malpractice or negligence during the coronavirus pandemic. The mandate comes as Puerto Rico’s House of Representatives investigates members of Vázquez’s COVID-19 taskforce and Department of Health for a since-canceled contract worth $38 million for rapid testing kits from a construction company.

The chairman of the U.S. Senate Finance Committee Chuck Grassley on Monday wrote to the governor “inquiring about questionable contracts and potentially wasted relief money” during the COVID-19 emergency and previous disasters. Grassley asked Vázquez to turn over information regarding the contract for coronavirus tests as well as other investigations into “possible malfeasance” by the local government during the last four years.

Days after admitting the island’s COVID-19 count was inaccurate, Health Secretary Lorenzo González on Tuesday said that, as of April 19, the island had 915 confirmed cases of the coronavirus, 218 less than what the department previously reported for that date. Deaths stand at 67.

BRAZIL: At least eight states have begun relaxing quarantine measures, opening shopping malls, churches and other establishments to the public. The states include Río Grande do Sul, Santa Catarina, Goias, Espirito Santo, Paraiba, Sergipe, Tocantins and the Federal District. Brazil’s governors have been at odds with President Jair Bolsonaro, who has gone as far as to physically protest “stay at home” measures ordered by state officials. The number of confirmed COVID-19 cases continues to increase across the country.

VENEZUELA: U.S. President Donald Trump ordered Chevron to “wind down” oil ventures in Venezuela late Tuesday night, as one of the administration’s final moves to pressure President Nicolas Maduro out of office. The oil company was barred from any further drilling or extraction and is expected to pull completely out of the country by Dec. 1. Chevron was the only remaining U.S.-based oil company in Venezuela. Spokesperson Ray Fohr said the company would comply with the President’s order while still prioritizing the “safety and wellbeing” of its employees.

COLOMBIA: Protesters in Ciudad Bolívar continued demands for more assistance or a lifting of quarantine restrictions, as Colombia’s most impoverished areas struggle to maintain a living wage. Local media reported residents are still waiting for shipments of food and other aid that were promised by President Iván Duque on March 25.

ECUADOR: The mayor of Guayaquil, Cynthia Viteri, issued a warning to fellow leaders in Latin America, urging them to enforce shutdowns in order to prevent what happened in Guayaquil. In an interview with The Guardian, Viteri compared the impact of COVID-19 in her city to the “horrors of war” and the bombing of Hiroshima. She claimed that official estimates, which place the death toll at around 537, should be closer to 8,000 based on data collected from local cemeteries. Viteri, who recovered from COVID-19 herself, said her administration is finally regaining control over essential services and is building two additional cemeteries for victims.

DOMINICAN REPUBLIC: President Danilo Medina yesterday inaugurated a new agency within the Ministry of Defense that will work in conjunction with the military to enforce measures in relation to the pandemic. The Command, Control, Communications, Computers, and Cybersecurity Center (C5i) will work to monitor the implementation of government measures during the pandemic, ranging from enforcing domiciliary quarantine to transferring patients to medical centers when necessary. The Dominican Republic continues to be the hardest-hit country by the pandemic in the Caribbean as confirmed cases hit 5,300 and deaths climbed to 260.

NICARAGUA: A group of 200 Nicaraguans in Panama are the latest to ask for repartition from the Nicaraguan government during the coronavirus pandemic. Even though President Daniel Ortega has not closed the country’s borders, his government has so far refused to repatriate Nicaraguans in El Salvador, Honduras, the Cayman Islands and now Panama. The government previously barred the return of 92 Nicaraguan migrants from Honduras and El Salvador, though a group of them eventually entered Nicaragua through unofficial entry points. Similarly, the government canceled the repatriation flights of 160 Nicaraguans in the Cayman Islands. While Nicaragua has only confirmed 10 cases and one death from COVID-19, Ortega’s administration has not instituted any extensive social distancing measures.

U.S.-MEXICO: The U.S. on Tuesday urged Mexican officials to reopen border assembly plants amid worker walkouts. Christopher Landau, the U.S. ambassador to Mexico, launched a Twitter campaign in an effort to keep supply chains intact. The industrial base in the North American free trade zone may “evaporate” if lockdowns continue to damage the flow of goods. Mexico’s Economy Department assured that the two governments are conversing to protect their citizens and their economy. Dozens of plants have since shut down, affecting 180,000 industrial workers.

U.S.-MEXICO BORDER: Nearly 60 percent of immigration detainees who have been tested for COVID-19 have been positive, according to federal officials. The total estimate is expected to be higher, since ICE does not update its website regularly. ICE has tested 425 of its 32,309 detainees as of Tuesday. Immigration officials are not testing people who show serious symptoms, according to federal sources inside detention centers. In Texas, migrants make up about 10 percent of the state’s 193 cases. Most recently, sixteen migrants tested positive for coronavirus in Mexico’s border state of Tamaulipas.