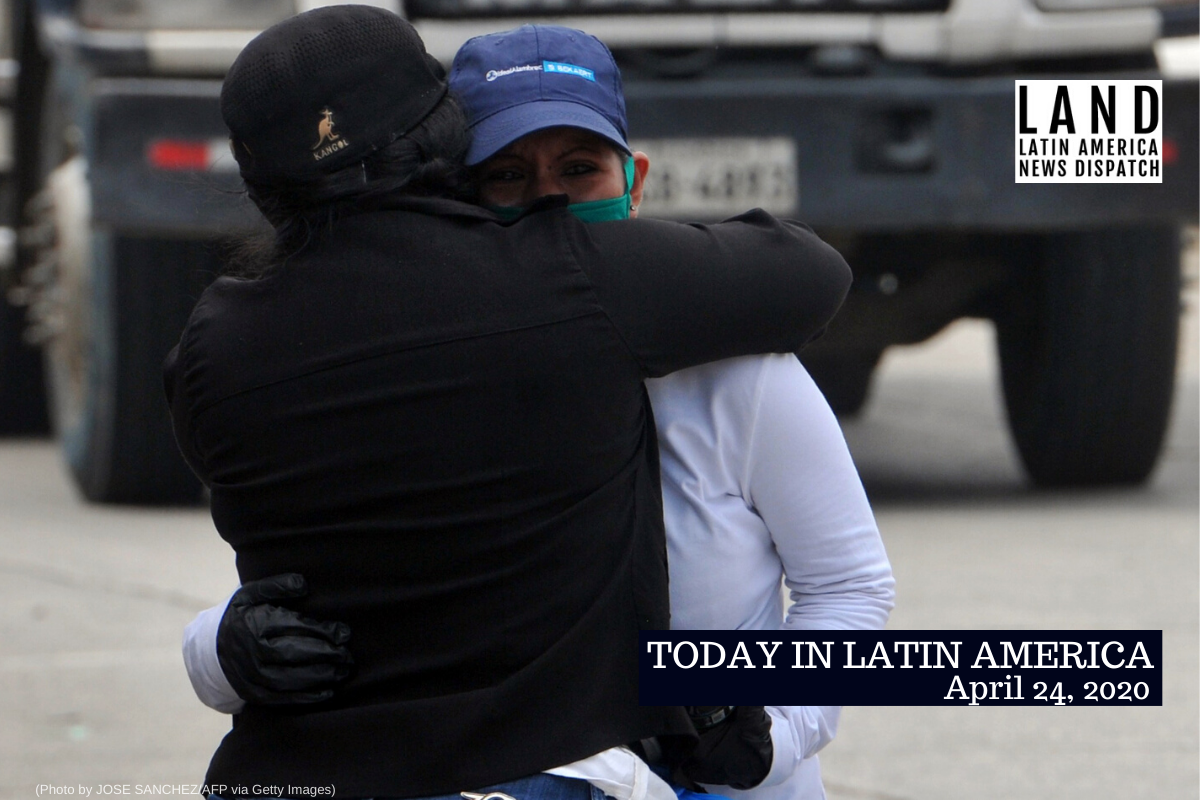 Relatives of a suspected victim of the novel coronavirus COVID-19, mourn as they arrive with the coffin of their deceased loved one at the Angel Maria Canals cemetery in Guayaquil, Ecuador, on April 23, 2020. (Photo by JOSE SANCHEZ/AFP via Getty Images)

ECUADOR: The number of confirmed coronavirus cases doubled in one day after delayed test results were taken into account. Health Minister Juan Carlos Zevallos said in a press conference on Thursday that the number of confirmed cases had doubled to 22,160, due to a lag in receiving test results. The coastal city of Guayaquil has become a coronavirus epicenter in Latin America with the monthly average of deaths in the state nearly quadrupling.

The New York Times analyzed morality data from the first two weeks of April in Ecuador and found that three times the usual number of people died. The report estimated that the death toll could be 15 times higher than what authorities have reported. As of April 23, the Ecuadorian government reports 560 deaths caused by COVID-19.

“It was as if we were attacked from the air like in Hiroshima,” Cynthia Viteri, the mayor of Guayaquil and a former presidential candidate, told the Guardian.

ARGENTINA: The government did not make a $500 million debt payment on Wednesday, threatening default in 30 days. President Alberto Fernández presented a $60 billion debt restructuring plan to creditors but the proposal was rejected earlier this week. The government announced that it intends to use the 30-day period before the default to come to an agreement with creditors. If an agreement is not reached, Argentina will face its second default since 2001.

BRAZIL: Justice Minister Sergio Moro took back his threat to resign over President Jair Bolsonaro’s intent to appoint the federal police chief, according to local media reports. Moro agreed to stay in his post on the condition that he would be able to appoint the police chief to replace Maurício Valeixo. The move by Bolsonaro was seen as his attempt to cement control of the Federal Police. Moro, a popular but contentious public official, became known for his fight against corruption as the lead investigative judge into the Operation Car Wash scandal.

VENEZUELA: U.S. President Donald Trump and opposition leader Juan Guaidó reportedly reached an agreement last week to liberate $80 million in seized funds. Guaidó promoted the agreement as an achievement of his interim government for including a $300 bonus for roughly 60,000 medical personnel.

But the AP revealed that the deal includes a $5,000 monthly payment to members of the opposition-controlled National Assembly.  Details of the agreement have not been made public. The money represents a fraction of the estimated $11.6 billion of seized Venezuelan assets abroad.

CUBA: The monthly rationing system first instituted under Fidel Castro is coming back due to the coronavirus, in an effort to prevent Cubans from shopping in multiple locations, looking for necessary supplies. The libreta was introduced in 1959, but started to wane in use in 2008 when Raul Castro took over the country. Shortages of basic food and goods have caused hours-long lines to form outside of supermarkets, potentially turning into a source of infection and spread of the virus. To calm shoppers, authorities have added more products to the ration book, such as food, toiletries and oil, ensuring that each person is guaranteed their rations at a local shop. Authorities are also experimenting with online shopping and delivery.

DOMINICAN REPUBLIC: The Santiago mayor’s office sent firetrucks to the streets, threatening to spray residents with water who don’t heed social distancing rules. The trucks drove down the streets playing an audio recording warning people they would be soaked with water if do not comply with social distancing. Santiago has 638 confirmed cases of coronavirus, and 38 deaths. In recent days, long lines have formed outside of banks, with people seeking government assistance.

PUERTO RICO: The bodies of two transgender women were found inside a burnt car in the city of Humacao on Wednesday, after local police received a 911 call. LGBTQ organization Broad Committee for the Search for Equality (CABE) identified the women as Layla Peláez and Serena Angelique Velázquez. Police are investigating as to whether the killings are a hate crime, and no arrests have been made yet, according to Captain Teddy Morales. The killings come after two other transgender Puerto Ricans were killed in February. Pedro Julio Serrano, a spokesperson for CABE cited that eight members of the LGBTQ community have been killed in the past 15 months, with all cases remaining unsolved.

EL SALVADOR: Alexander Contreras, a 20-year-old college student, made headlines because he resorted to climbing a guava tree next to his father’s house to get a signal and connect to his online classes. Students around the region struggle to continue their education during lockdown, due to poor or non-existant internet connection at their homes. Photos of Contreras perched at the top of the tree with his cellphone, wearing a mask and headphones, went viral on social media. President Nayib Bukele tweeted an order to Innovation Secretary Vladimir Handal to connect Contreras with a free, good broadband signal

MEXICO: President Andrés Manuel López Obrador approved the production of ventilators developed by the National Council for Science and Technology (Conacyt). Like many other countries, Mexico has been scrambling to provide ventilators for critically ill coronavirus patients. According to experts, the country may need as many as 20,000 ventilators, and currently there are only 3,000 available. The first batch of ventilators is set to be delivered by the second week of May, which health officials believe will be when the virus begins to peak.

MEXICO: The pandemic has hit the pillars of the Mexican economy: trade, oil, remittances and tourism. Economists are predicting an economic collapse that could push 22 million Mexicans into poverty this year. The International Monetary Fund expects GDP to contract 6.6%, second in Latin America only to Venezuela. The government has done little to stabilize the economy amid the crisis. President López Obrador’s recovery package has been modest compared to other countries.