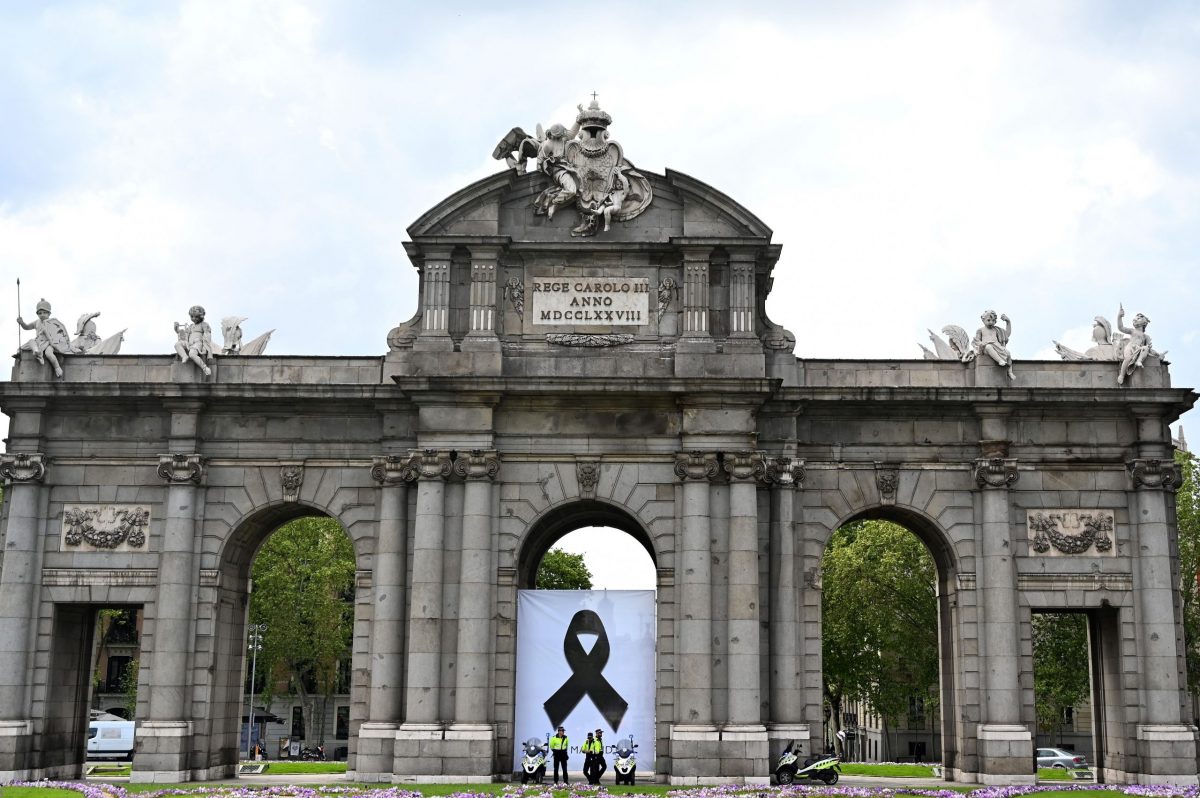 A black ribbon commemorating coronavirus victims hangs on the Puerta de Alcala in Madrid on April 23, 2020 as police officers stand guard amid a national lockdown to fight the spread of the COVID-19 coronavirus. (Photo by GABRIEL BOUYS/AFP via Getty Images)

MADRID — Spain is one of the countries that has been affected the most by COVID-19, with more than 225,000 confirmed cases and over 23,000 deaths. A strict quarantine was declared on March 14, with people only allowed to go out to buy food or medicines, or to work on essential jobs, such as in hospitals and supermarkets. Going outside without motive carry fines that can range from 300 to 30,000 euros.

Madrid has been hit especially hard with a 12% death rate among those infected with the virus. Long lines gather in front of the supermarkets, now with reduced capacity, as shoppers try keep social distance while wearing masks and gloves. Latin Americans living in Spain are also among those affected.

According to official data, 27.7% of foreigners registered living in the country come from Latin America, with the majority of them hailing from Colombia, Venezuela, Ecuador, Peru, Honduras and the Dominican Republic. Mariana Gálvez is one of them. She’s a journalist and grad student who moved from Mexico City to study last October.

“The first thing I thought was that the quarantine wasn’t going to last that long. I didn’t realize the scope of the situation,” she told Latino Rebels.

“For many of Latin Americans here, it’s a big sacrifice. Being here it’s a privilege not many can afford,” Gálvez said, adding that the idea of returning to Mexico hasn’t crossed her mind since she worries on becoming a risk factor for her family. “My parents are older and I would not want to become a problem for their health. Though it’s hard to be alone in another country.”

However, she still has Mexico, including her hometown of Tampico, in her mind.

“I have friends back home that have lost her relatives or no longer have jobs. To be honest, I’m much more worried about the situation in Mexico and the rest of Latin America, since it’s much more vulnerable,” Gálvez said.

Caridad Bermeo is a friend and Gálvez’s classmate. Like her, Bermeo never thought the lockdown would last for two months. She keeps a tight schedule has helped to deal with the quarantine and points out that even if she wanted, she couldn’t return to Ecuador. Her own country, one of the most affected by COVID-19 in the region, has banned flights coming from Spain.

As a journalism student, she hopes to start her internship in Spanish newspaper El País in September. To prepare herself, she keeps close attention to how the leftist government of Pedro Sánchez has been managing with the crisis. However, she doesn’t neglect news from home.

“Time zones help. I focus the mornings to Spanish news and on the afternoons to the ones coming from Ecuador,” Barmeo told Latino Rebels.

For her, the images she has seen from Ecuador —particularly of Guayaquil— are painful to watch and considers them “some of the toughest” seen during the pandemic. She can’t help but extend some of the blame to the Ecuadorian government.

“Not just about their handling of the pandemic, but the general failings in the public services,” she said.

Although the numbers in Ecuador are staggering, particularly compared to the country’s population of 17 million, Brazil, the largest country in Latin America, is also leading the toll of coronavirus cases with over 63,000 confirmed cases. Juliana Dias is from Minas Gerais and also a student.

“I really wanted to go back, but then I couldn’t,” Dias said.

She’s worried with how the right-wing government of Jair Bolsonaro has been managing the situation. Bolsonaro, who has called coronavirus “a little flu” fired his health minister, Luiz Mandetta, earlier this month.

“There’s no federal-level measure to promote quarantine or social distancing,” said Dias, noting that the lack of mass testing and overcrowding in the hospitals are main concerns for her people back home.

“The contact I have with my family and friends is mainly through message apps and video calls. It’s difficult to establish time since there are five hours between us,” Dias said. She also explained that she and all her siblings gather together more frequently now, albeit online, than when she was back in Brazil.

Spain’s situation appears to be slowly improving. Last Sunday, the government declared 288 deaths within 24 hours, the lowest number in over a month. Cautious measures, such as allowing children to go out with their parents to stroll, have been established to progressively come out of the lockdown.  But like anything related to coronavirus, it’s too early to tell.