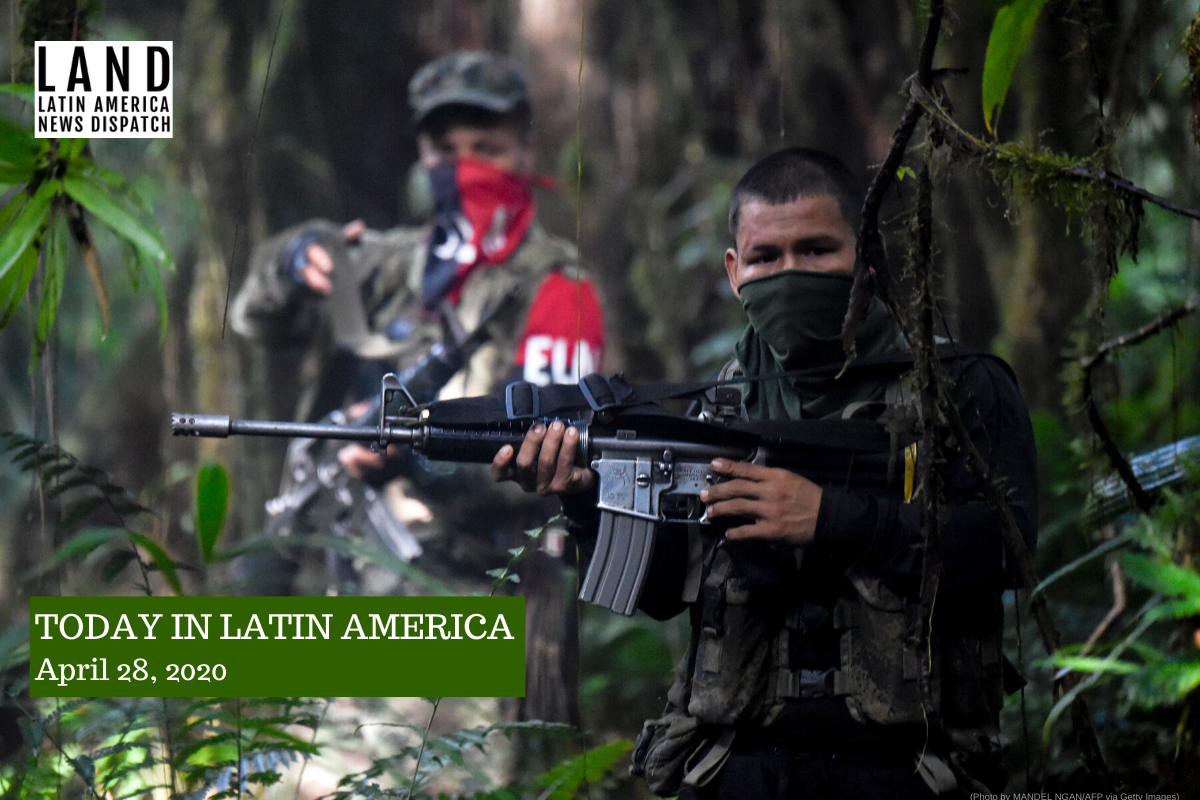 The ELN or National Liberation Army is Colombia's last rebel army and one of the oldest guerrillas in Latin America. (Photo by Raul ARBOLEDA /AFP via Getty Images)

COLOMBIA: The National Liberation Army (ELN) announced yesterday that they will resume military activity on Friday after a month-long ceasefire. The country’s largest rebel group had declared a unilateral ceasefire at the end of March to alleviate the humanitarian crisis caused by the coronavirus pandemic, and as a gesture of peace.

The decision to end the ceasefire came despite another communique yesterday by Carlos Ruiz Massieu, the UN Secretary General’s representative to Colombia, asking that the ELN extend the ceasefire. The group cited the government’s unwillingness to negotiate as the reason why they did not extend the ceasefire. The Center of Conflict Analysis and Resources (Cerac) has counted over 40 days without hostility between security forces and ELN guerrillas. President Iván Duque suspended peace talks with the ELN after a bomb attack killed 23 cadets in Bogotá in January 2019.

BRAZIL: The Federal Police linked President Jair Bolsonaro’s son, Carlos, to a criminal fake news operation to intimidate public officials. The Supreme Court launched the investigation in March after justices were targeted by fake news campaigns. According to the newspaper Folha de S.Paulo, the investigation into his son and mounting evidence was the reason President Bolsonaro looked to replace Federal Police chief Maurício Valeixo. Minister of Justice Sergio Moro resigned over the weekend over what he called “meddling” by the President. Carlos Bolsonaro is also a Río de Janeiro councilman.

BOLIVIA: President Jeanine Áñez is under criticism after her daughter used a state aircraft to travel to Roboré in eastern Bolivia during the coronavirus pandemic without consulting local authorities. Carolina Ribera Áñez is also the director of the presidency’s “Unidad de Apoyo y Gestión Social.” Áñez tweeted a message calling for unity and a document from Ribera’s office explaining that the visit had three goals: to visit the daughters of a nurse who died from coronavirus, provide aid, and listen to the people.

COSTA RICA: President Carlos Alvarado announced yesterday that Costa Rica is ready to start its reopening process on May 1. During weekdays, gyms, sports facilities and swim schools can reopen at 25 percent of capacity. Theaters will also be allowed to open their doors, provided that people remain 6 feet apart from each other. During weekends, barber shops, beauty salons and auto-repair shops can reopen at 50 percent of capacity. Beaches and national parks, however, will remain closed. Alvarado said that after every 15 days the government will evaluate the results and decide on further measures. This Monday, Costa Rica registered 2 new cases of the coronavirus, and 23 people recovered.

EL SALVADOR: Following a weekend marked by gang violence which resulted in 60 killings in only three days, President Nayib Bukele announced the prison lockdown will continue and any gang member who resists arrest will be attacked with “proportional and possibly lethal force.”

Steel sheets were installed around prisoners’ cells, blocking sunlight and all communication with the surrounding prison. “We will make the gang members who committed these homicides regret their entire lives for having made this decision,” tweeted Bukele.

Amnesty International Director for the Americas Erika Guevara said the measures raise concern because of the excess of violence and military power, and described the situation as “humiliating and demeaning” for a population who is deprived of their liberty.

NICARAGUA: Offering free admission, boxing fights resumed on Sunday in Nicaragua. Fighters told the Associated Press they “don’t fear the coronavirus” and want to work in spite of the threat. This was one of the many public events the government promoted in recent days. The event does not meet the World Health Organization’s guidelines on social distancing. Daniel Ortega’s administration confirmed 11 cases of COVID-19 with three deaths, but an organization called Observatorio Ciudadano accused the government of holding back information. The group decided to do an independent count and claims there are 316 suspected cases in the country.

MEXICO: Advocates say Mexico City’s quarantine puts women at a greater risk of disappearance and makes it harder to find them or their kidnappers. The city government released a report last week saying that the daily number of calls reporting missing children or adults decreased slightly despite the lockdown. Another set of data showed 22 calls to a women’s helpline between March 11 and April 21 regarding kidnappings, forced disappearance, and trafficking. One researcher who specializes in gender-based violence pointed out that women spending more time on social media are more likely to encounter traffickers – and that the lockdown presents new obstacles to loved ones who are looking for someone.

MEXICO: A majority of Mexicans support the efforts of President Andrés Manuel López Obrador to curb the spread of the coronavirus, according to an opinion poll surveying 549 people over the phone this month. The poll showed a 73 percent approval rating, with 72 percent agreeing with the decision to extend the country’s closures to May 30. The government’s economic response to the pandemic, which has drawn fierce criticism from the business sector, received support from a smaller majority, or 62 percent of survey takers.

UNITED STATES: Immigration and Customs Enforcement said a federal court in Miami was overstepping its authority in response to a recent decision over the safety of migrants in detention during the pandemic. In a ruling last Wednesday, a magistrate judge recommended that ICE “substantially” reduce the population of three detention centers in that state. The recommendations also ask the agency to undergo inspections and report to the court twice each week on the number of releases. A U.S. District Judge will review the decision sometime this week for a final decision. Several judges in states including Pennsylvania and California have recently ordered the release of some ICE prisoners who face a higher risk of complications from the coronavirus.