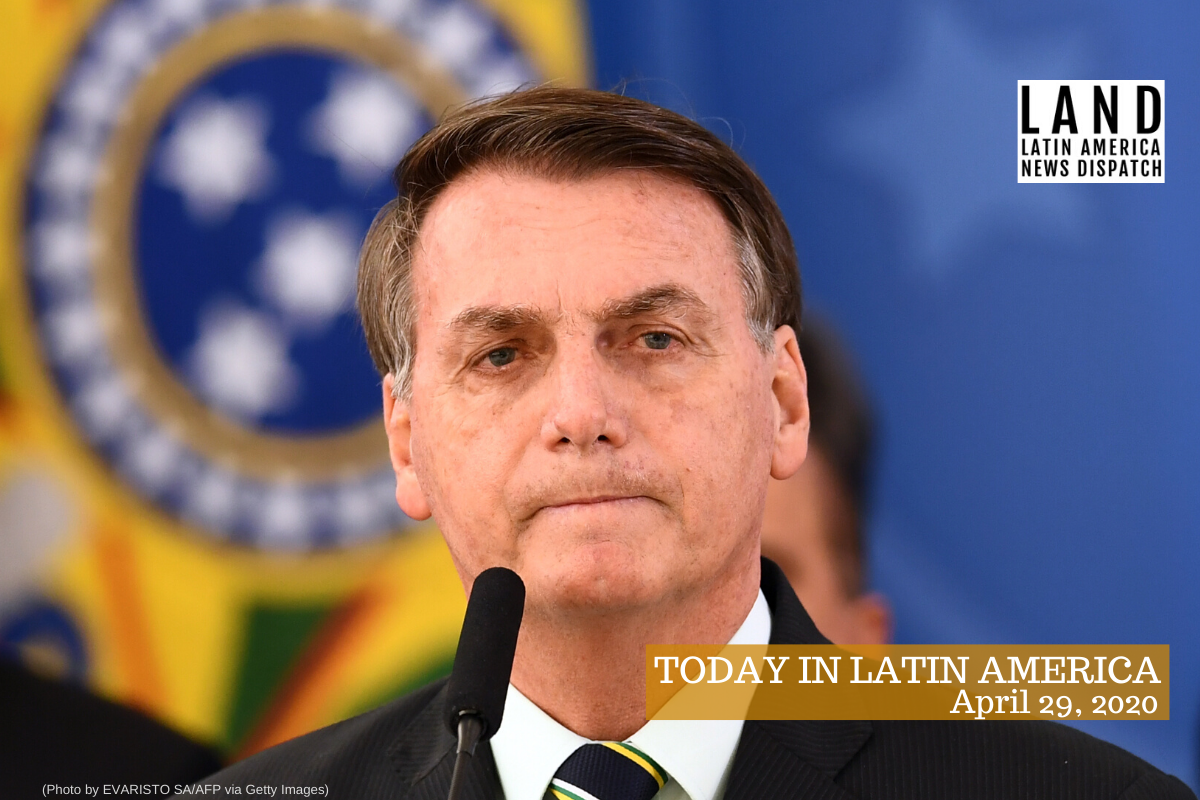 Prosecutor General Augusto Aras requested the investigation not long after Moro’s statement to look into several crimes, including obstruction of justice. In response to the allegations, Bolsonaro told reporters “the day I have to submit to any of my subordinates, I cease to be President of the Republic.”

Bolsonaro also named close allies as federal police director and justice minister. André Mendonça, an evangelical pastor and former Attorney General, will replace Moro. Alexandre Ramagem was appointed as Director General of the Federal Police. The appointment of Ramegan, who also served as the director of Brazil’s intelligence agency, ABIN, and has been seen with Bolsonaro’s sons, has already raised concerns among government critics.

ARGENTINA: The National Civil Aviation administration announced that airlines must suspend sales of local and international flights for four months, until at least September 1. The decree, issued on Monday, prohibits flights to, from or within Argentina, which has had its borders closed to non-residents since March. In response, the International Aviation Agency sent a letter to the government claiming the decree violates bilateral agreements and threatens thousands of jobs.

PERU: A riot in Lima’s Miguel Castro Castro prison led to the deaths of nine prisoners Tuesday. Police fired on inmates protesting the facility’s conditions and the deaths of two inmates. At least 13 inmates have died from COVID-19 across Peru. Authorities have confirmed more than 500 cases of COVID-19 among the prison population, and at least 100 prison workers have also been infected due to poor sanitation. Peru has nearly 30,000 confirmed cases of COVID-19 and has more cases than any Latin American country other than Brazil.

JAMAICA: Prime Minister Andrew Holness announced this week that one deportee flown to Jamaica from the United States last week has tested positive for COVID-19. All of the 46 Jamaicans who arrived on the deportation flight have been quarantined in a facility where they will be checked twice daily during two weeks. Jamaica closed its borders in response to the COVID-19 pandemic last month. However, along with Guatemala, Mexico and Haiti, it has now received cases of the coronavirus from deportations from the United States.

COSTA RICA: The country’s active coronavirus case count fell below 400 yesterday, and United Airlines announced that it will begin operating limited flights from the United States in early May. Yesterday, officials confirmed eight new coronavirus cases, and 19 recoveries, marking 12 consecutive of declining case counts. United Airlines flights are scheduled for four days in the first two weeks of May, only flying in and out of the George Bush Intercontinental Airport in Houston and Juan Santamaría International Airport in Costa Rica.

GUATEMALA: Migrants returning on deportation flights from the United States are facing stigma, and sometimes violence, based on fears that they may be carrying the coronavirus, Al Jazeera reports. The government announced that 100 deportees have tested positive for the coronavirus. President Alejandro Giammattei said during a televised address that officials have witnessed “several actions persecuting people returned to our country.” These actions include an April 15 incident in Quetzaltenango, where residents threatened to burn buses carrying deportees, and an April 19 case in Santa Catarina Palopo.

MEXICO: The Economy Secretariat and the European Union announced the end of negotiations on an updated trade agreement. Mexico and the E.U. had been negotiating to modernize a 2001 trade agreement, including duty-free trading, as a way to help both economies recover once the coronavirus pandemic passes. Economy Secretary, Graciela Márquez, and the E.U. trade commissioner, announced that the new deal is ready to be signed by the parties and ratified by the respective legislative branches. The E.U. is Mexico’s third-largest trading partner.

UNITED STATES: On Tuesday, President Trump signed an executive order to use the Defense Production Act to keep meat processing plants open as critical infrastructure during the coronavirus shut-down. Labor unions criticized the move, saying it will put workers at risk. At least 20 meatpacking plants have temporarily closed. Meatpacking plants rely on immigrant workers from Mexico, Central America and beyond. In Greenly, Colorado, Mexican immigrant Saúl Sánchez was the first reported COVID-19 death of a worker at the JBS meat-packing plant. The first reported death at the Smithfield plant in South Dakota was Augustín Rodriguez, a Salvadoran immigrant.