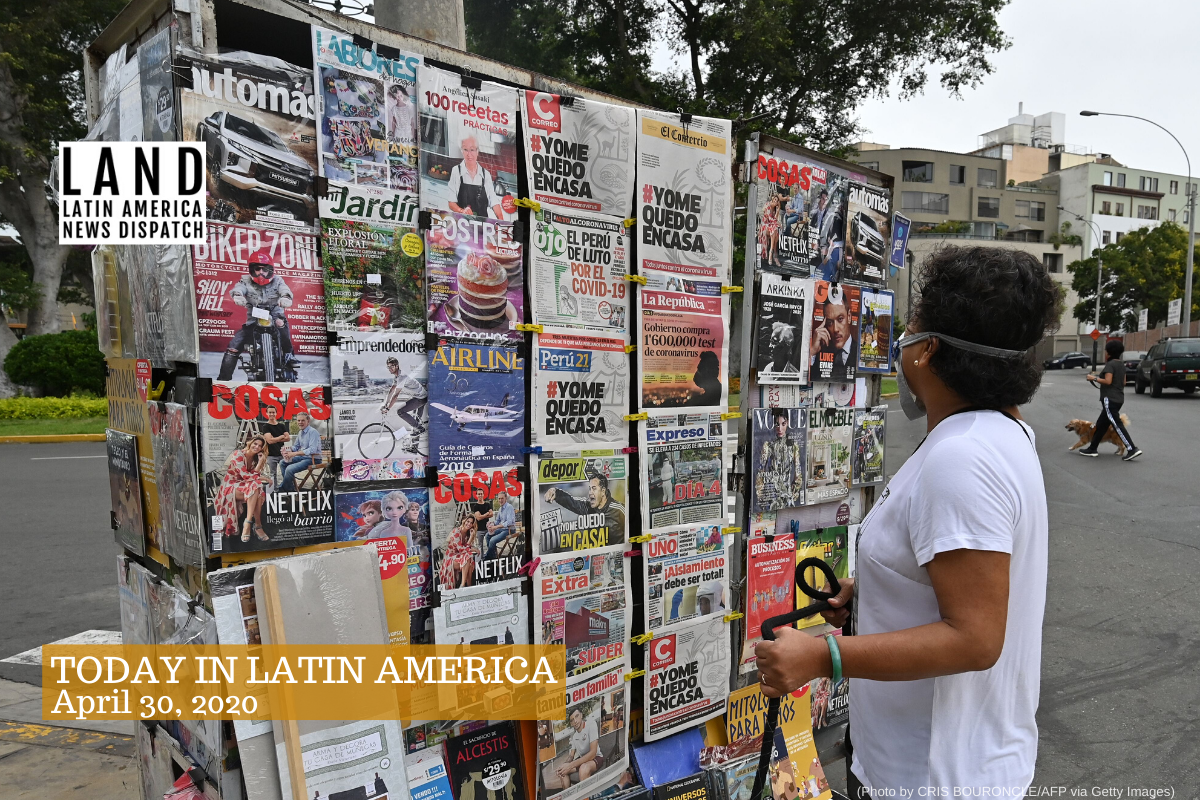 A woman looks at newspaper's front pages on the new coronavirus pandemia at a stand as she walks her dog in Lima on March 20, 2020. (Photo by CRIS BOURONCLE/AFP via Getty Images)

PERU: The Ministry of Women and Vulnerable Populations (MIMP) reported an increase in gender-based violence cases since the start of the coronavirus quarantine. At least seven femicides have been confirmed in the last month, and activists reported at least 80 cases of sexual violence. Approximately 1,500 complaints have been fielded, with 60 percent of domestic violence cases occurring in densely populated cities, according to MIMP head, Gloria Montenegro. On Monday, the government announced new protective measures to combat gender-based violence, including a revision to criminal legislation meant to streamline the prosecution of offenders.

A United Nations Population Fund report released Tuesday warned that domestic violence cases around the world could grow by at least 31 million if quarantine measures continue to the end of the year without specific protections for vulnerable populations. The report estimates at least a 20 percent increase in cases in the next three months. Activists first expressed worry that violence would escalate weeks ago, with specific concerns towards Latin America—which already experiences high rates of gender-based violence.

BRAZIL: President Jair Bolsonaro yesterday revoked his nomination of Alexandre Ramagem as federal police chief hours after the Supreme Court blocked the appointment. Many had expressed concerns of nepotism following Ramagem’s nomination in part because of his close connections with Bolsonaro’s sons. The Supreme Court authorized an investigation into possible corruption and interference by the President on Monday, which will be led by the federal prosecutor general.

ECUADOR: The country’s Health Ministry now estimates that there will be at least 10 million cases of COVID-19 in Ecuador by the end of the year, which would make up more than half of the population. Health Minister Juan Carlos Zevallos first proposed the figures during a televised interview on Sunday, saying that 60 percent of the population would be infected by the end of June. The health official later clarified the estimates, which alarmed many officials in highly contagious areas such as Guayaquil. President Lenín Moreno previously announced that the country could expect at least 800,000 cases if no emergency measures were taken, but the number has quickly increased.

PUERTO RICO: After a meeting with local officials Wednesday night, Governor Wanda Vázquez agreed to start reopening public school cafeterias early next week. Before then, the island’s government had refused to open the cafeterias to feed food-insecure students and their families amid the coronavirus pandemic. The Department of Education instead enlisted non-profit organizations to facilitate the distribution of food from schools across the US territory, in which 70 percent of public school students live below the poverty line. Secretary of Education Eligio Hernández stated that 64 percent of cafeteria workers are elderly, and opening the facilities could put them at risk. Seven families, joined by five nonprofit organizations, sued the island’s Department of Education this past Tuesday over its refusal to reopen the cafeterias.

HONDURAS: Starting this week, Honduras will have four temporary isolation centers that will receive and house deportees arriving in the country from Mexico and the United States. All deportees will be subject to 14 days of mandatory quarantine upon arrival. The centers will be able to accommodate a total of 1,050 people, according to Honduran authorities. On April 26, Mexico’s migration agency reported over 3,600 deportations to the Northern Triangle, including Honduras, between March and April. Honduras has over 700 confirmed cases of coronavirus and 65 virus-related deaths.

PANAMA: Between April 28 and April 29, dozens of Panamanians across the country took to the streets to protest and demand that the government give them the funds and food promised under the Panama Solidario program. The initiative was launched a month ago by President Laurentino Cortizo. Panama Solidario is meant to collect and distribute aid to Panama’s poorest communities as coronavirus cases in Panama climb over 6,200. Cortizo announced on April 29 that 84,000 people will be receiving the program’s first bonus on April 30 through their national identification cards and that recipients will be able to cash in their bonuses at specified stores.

MEXICO: Seven of Mexico City’s top hospitals reached their licensed capacity and have had to turn away COVID-19 patients. The capital has become the epicenter of the disease with nearly a quarter of Mexico’s confirmed cases. The ABC Medical Center said Monday that it would no longer accept virus patients due to a lack of resources and space. Twelve out of 56 public hospitals have no beds available, and 10 others have limited capacity. Experts warn that there is also a shortage of ventilators in Mexico City. Medical workers erupted in protests last week over the lack of protective gear and protocols at hospitals.

MEXICO: Mexico’s Interior Department said in a statement on Tuesday that Mexican towns and states should stop initiating roadblocks and curfews. Dozens of towns have enacted curfews and several states have threatened to arrest people who fail to comply with social distancing measures. The department said in a statement that such measures violate constitutional rights and encourage “abuse of authority.”

U.S.-MEXICO BORDER: The U.S. Defense Department is considering replacing duty troops with members of the National Guard on the U.S.-Mexico border. Reducing the number of active duty troops would bring the deployment into line with previous military operations. The change could take place in September, according to officials. The Pentagon recently deployed an additional 540 duty personnel to conduct monitoring missions. Officials say this may have been a part of the Trump administration’s coronavirus response.