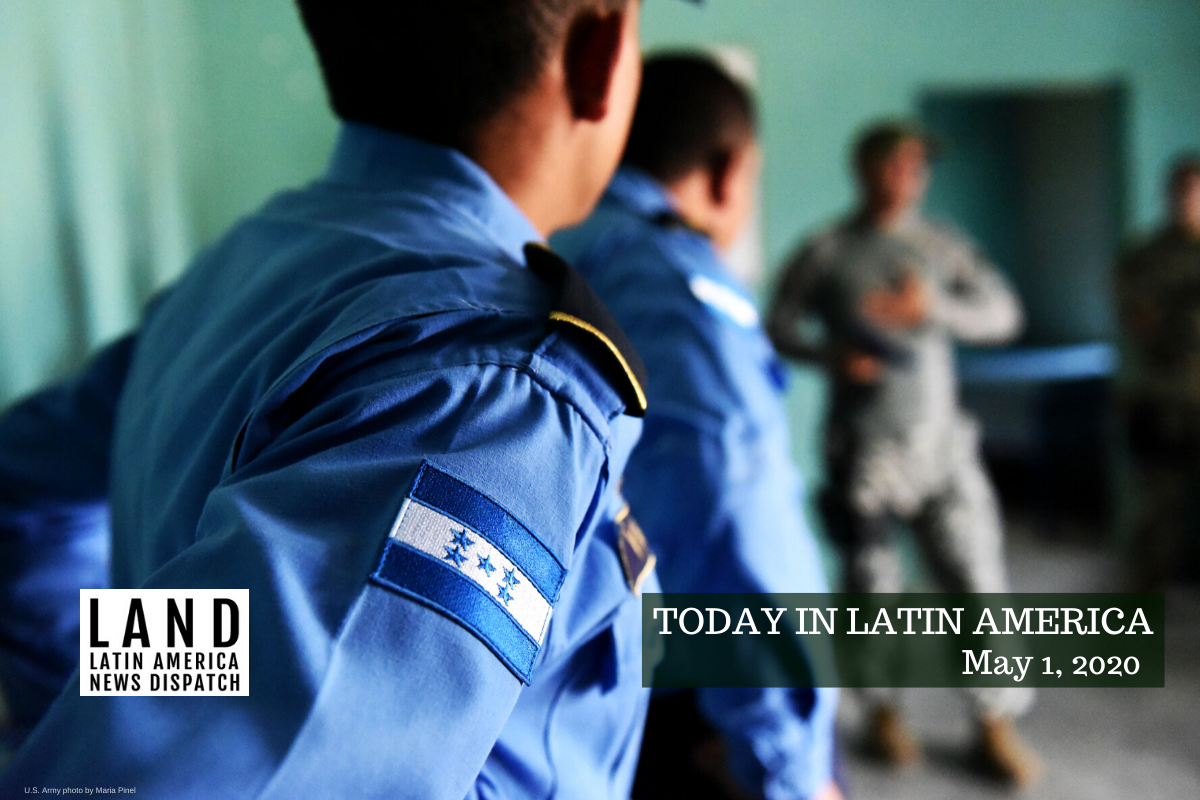 Members of the National Police of Honduras during a training in La Paz, Honduras, 2017. (U.S. Army photo by Maria Pinel)

HONDURAS: United States Federal prosecutors announced drug trafficking charges against Juan Carlos “El Tigre” Bonilla Valladares, former head of the Honduran National Police. These are the latest in a series of drug charges against Honduran officials, several of whom have plead guilty and have been sentenced to prison.

Prosecutors say Bonilla Valladares presided over U.S.-bound shipments of machine guns, other “destructive devices,” and multiple tons of cocaine. The charges allege that the shipments were on behalf of President Juan Orlando Hernández, and his brother Juan Antonio “Tony” Hernández, a former Congressman found guilty of drug trafficking in 2019. If convicted, Bonilla Valladares could face a life sentence. Bonilla Valladares denied the charges against him on Honduran television, saying that he could defend himself “anywhere.” He is not in U.S. custody.

BRAZIL: The number of COVID-19 cases in the country may range from 957,087 to 1.49 million, according to a new study. The study takes into consideration that cases have been under-reported and estimates a figure 16 times higher than the government’s. The study was completed by COVID-19 Brasil, an organization that brings together scientists and students from various Brazilian universities. Health authorities report a total of 73,553 COVID-19 cases. Domingo Alves, leader of the Health Intelligence Lab from the University of São Paulo, told Efe that the official figure represents only 15 percent of the total cases, which consists of the hospitalized population.

BOLIVIA: The general elections originally set for this coming Sunday have been pushed back. The Chamber of Deputies, with a majority vote from Movimiento al Socialismo (MAS),  approved the postponement of the elections for 90 days. According to MAS deputies, the constitution establishes elections must be held within 90 days to replace the current transitional government. This means the election would take place on August 2. Now the vote will go to the MAS-majority Senate. Other parties criticize MAS, saying the bill prioritizes politics over public health.

COLOMBIA: Unemployment rose to 12.6 percent in March, the worst rate in a decade, according to the National Administrative Department of Statistics (DANE). This figure is 1.8 percentage points higher than last year’s March figure. Since the previous year, 1.58 million people lost their occupations, most of them women. The head of DANE, Juan Daniel Oviedo, said small and medium-sized businesses are closing because weeks-long lockdown has rendered them financially unsustainable. The department found that the “inactive” population, those who are unemployed and not looking for a job, has increased by 1.8 million people, also a historic high. While the inactive population tends to be mostly a rural one, it is now present in urban areas as well.

JAMAICA: Authorities are implementing new requirements for the home-quarantine of nationals returning from overseas. As over 5,000 Jamaicans are trying to return home, Minister of Foreign Affairs and Foreign Trade Kamina Johnson Smith has said that they will be required to provide information about their health as part of an online application process for re-entry. Johnson Smith said that the use of GPS tracking for returned Jamaicans “could be part of the requirements for home quarantine, but we are not there yet.” She stressed that new protocols are being put into place to ensure security, and that there may be a requirement of a home visit, so that the Ministry can assess the location for “capacity to quarantine.”

PUERTO RICO: Police arrested Giovanni Roberto, a well-known advocate for the disadvantaged, as he led a protest in San Juan. Roberto, who leads a network of community soup kitchens, and other protesters called on the government to allow school cafeterias to open and provide meals to children during the coronavirus lockdown. A judge ruled that his arrest was not justified and he was released later in the day. Police also announced a shut down of several streets in San Juan ahead of the International Workers Day May 1, to “maintain a safe environment” for protestors and others. To maintain social distancing, demonstrators have taken to remaining in their cars, driving in caravans through the streets of San Juan to protest the government’s response to the pandemic. Later on Tuesday, authorities announced that some schools will begin serving meals next week.

COSTA RICA: The International Monetary Fund approved $504 million in emergency financing to help Costa Rica deal with the economic fallout from the COVID-19 pandemic. The money will be used to support relief measures for vulnerable populations, and to fund essential healthcare. Costa Rica has undertaken extensive measures to prevent the spread of the coronavirus, imposing nationwide closures and constructing specialized hospitals for treatment of COVID patients. The IMF noted that the health crisis has “severely impacted Costa Rica with its large exposure to trade, tourism, and foreign direct investment,” which will take a toll on the nation’s economy. The funds come from the IMF’s Rapid Financing Instrument, which has increased its ability to quickly disburse aid to vulnerable nations impacted by the coronavirus pandemic.

MEXICO: The International Air Transport Association (IATA) suspended Mexican airline Interjet from the clearing house membership for defaulting on payments. Interjet is one of Mexico’s three main airlines that has been hit by low demand during the coronavirus outbreak. The airline said in a statement it had taken the decision to opt out of the IATA clearing house, but aimed to rejoin the body once it had resolved outstanding payment issues. Other indications show air travel may soon increase. The Quintana Roo Tourism Promotion Council (CPTQ) announced the reopening of Cancún for travel as of June 1. Airlines from Canada, the U.S. and Europe will also begin operations then. Air Canada, Air Transat, Delta Airlines, Copa Airlines, Air Europa, Sunwing, Southwest and Aeroméxico all indicated they will resume service.

MEXICO: Economic activity dropped 1.6% the first quarter of 2020 compared to the final three months of 2019, according to the National Institute of Statistics and Geography (INEGI). The country has plunged deeper into a recession that predated the pandemic. This has been the biggest economic contraction since 2009. The economic impact of social distancing measures are expected to be more evident in the second quarter.