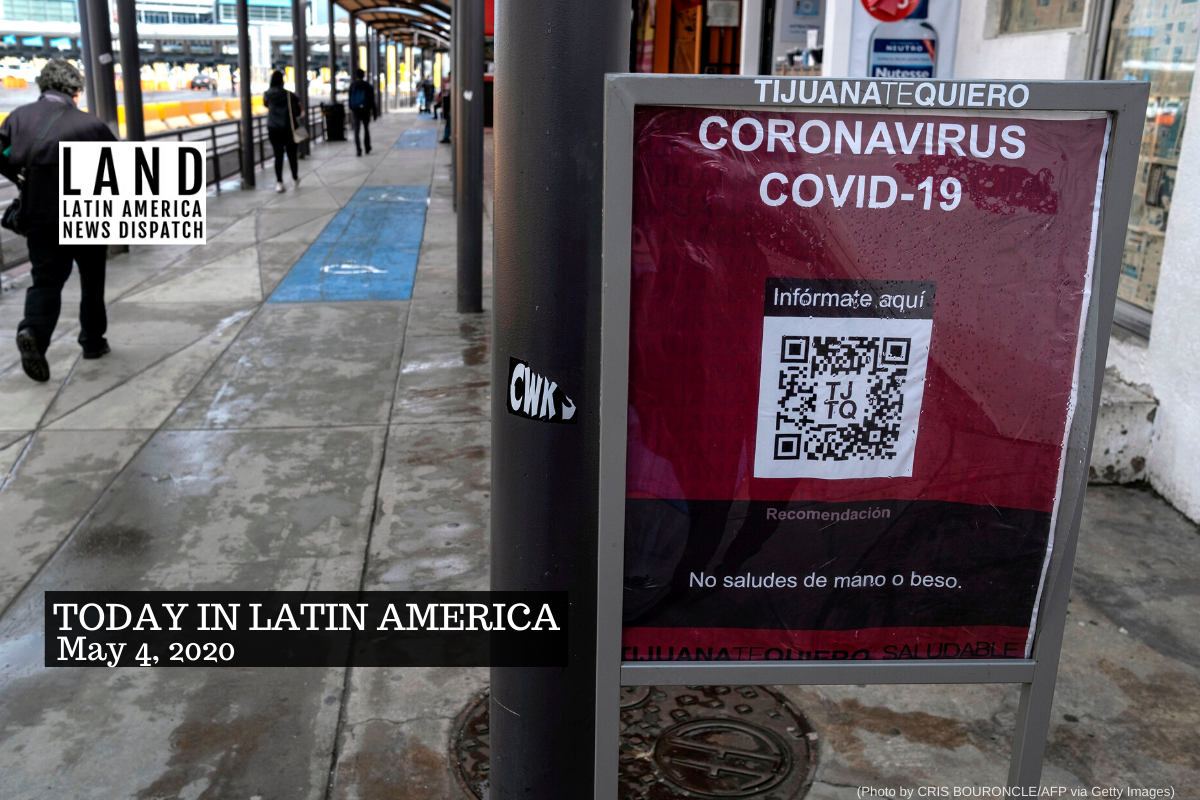 Commuters walk past a sign warning on the COVID-19 at San Ysidro port of entry, in Tijuana, Baja California state, Mexico, on April 18, 2020. (Photo by GUILLERMO ARIAS/AFP via Getty Images)

MEXICO: Maquiladoras in Baja California will reopen today, after the state government decided to reclassify manufacturers as “essential,” requiring tens of thousands of employees to return to work. Workers in factories that have been operating have reported failures to provide personal protection equipment and implement distancing guidelines, despite companies’ insistence that they are taking precautions.

In a video conference, the state’s Secretary of the Economy said authorities had reevaluated some services that they now consider essential; televisions, for example, are important to the telecommunications industry. La Jornada reported that Nissan, Volkswagen, Honda, and Toyota would restart Mexican manufacturing this week. The federal government allows governors to decide what businesses are essential, while U.S. companies and government officials have lobbied Mexico to reopen factories along the border. Manufacturing across North America is intertwined, so production for the Pentagon as well as the healthcare industry have faltered in the shutdown.

The pandemic has put pressure on supply chains created by the North American Free Trade Agreement. Labor activists say the pandemic has also cast a new light on the exploitation of workers in Mexico, where low wages have attracted U.S. manufacturers.

BRAZIL: As the confirmed coronavirus case count surpasses 100,000, the Amazonas city of Manaus is experiencing a shortage of coffins. The city serves the Amazon’s indigenous communities, but has no paved roads connecting it with supplies from outside the region. The national funeral home association has asked for coffins to be airlifted into the city from São Paulo. The Amazonas region currently has 6,683 confirmed cases of the coronavirus, with 548 COVID-19 fatalities. The real number of cases is likely higher.

REGIONAL: Prison riots broke out in Venezuela on Friday and Brazil on Saturday in response to growing fears of coronavirus transmission. A riot on Friday at the Llanos penitentiary in Guanare, Venezuela left 40 people dead and more than 50 injured. Inmates began protesting for permission for their relatives to bring food to the prison. A day later, inmates at the Puraquequara prison in Manaus, Brazil held seven guards hostage for five hours in protest of a policy that had ended all family visits in mid-March due to the coronavirus pandemic.

COLOMBIA: Following an investigation published in Revista Semana, Defense Minister Carlos Holmes Trujillo announced on Friday that 11 military officials would be removed from their posts. A brigadier general also asked to resign. On Friday, Semana updated its coverage of military spying on journalists, known as the Carpetas Secretas, with the names of victims and details of the data collected on them. The military has monitored more than 100 journalists and human rights activists, illegally collecting personal information. The scandal came as leaders and journalists from around the globe commemorated World Press Freedom day yesterday.

VENEZUELA: The Associated Press published an investigation on Friday into a failed attempt to overthrow President Nicolás Maduro. Based on interviews with more than 30 opposition members and freedom fighters, the AP found no evidence of U.S. government involvement in the plan, but identified Jordan Goudreau, a former Green Beret who served in Iraq and Afghanistan, as one of the rebellion’s leaders. Although the Maduro administration suppressed the uprising, the AP traced planning for the revolt back to April 30, 2019 when soldiers prepared to swear loyalty to opposition leader Juan Guaidó.

EL SALVADOR: President Nayib Bukele warned on Sunday that the health system is on the brink of collapse after 42 cases were registered this weekend, an increase of nearly 10 percent. The President’s announcement came as a surprise, since he had previously said that the country had capacity for at least 11,200 patients. As of yesterday evening there were 490 total cases. Eleven people have died and the La Prensa Grafica reported that the government has detained 2,394 people for not following quarantine regulations.

NICARAGUA: The country is experiencing its deepest economic depression since the 1980s, according to British analysts in the Economic Intelligence Unit. The EIU’s latest report predicts the country’s economy may contract as much as 6.5 percent, with a nine percent increase in unemployment. The report attributes the downturn to the coronavirus, and estimates that it will take until 2022 for Nicaragua to recover from the economic impacts of the pandemic.

MEXICO: Mexican Social Security Institute (IMSS) began accepting uninsured COVID-19 patients to their Mexico City facilities. The decision came after the country’s total number of cases exceeded 20,000. As of yesterday, there were 22,088 confirmed cases in Mexico, and 2,061 deaths. Mayor Claudia Sheinbaum of Mexico City, which has the highest concentration of cases, said she hopes the move will ease the burden on other city hospitals that are turning patients away. The city has filled 68 percent of its hospital capacity, but ventilators are the major concern.

MEXICO: Families in Ecatepec demanded information on their sick loved ones or the delivery of their bodies after videos posted on social media showed several body bags in the hospital. To prevent the spread of the virus, the hospital prohibited visits, leaving many in the dark about their family members’ conditions. Mexican authorities said in a statement they would work on improving communication and expediting the return of bodies to families.