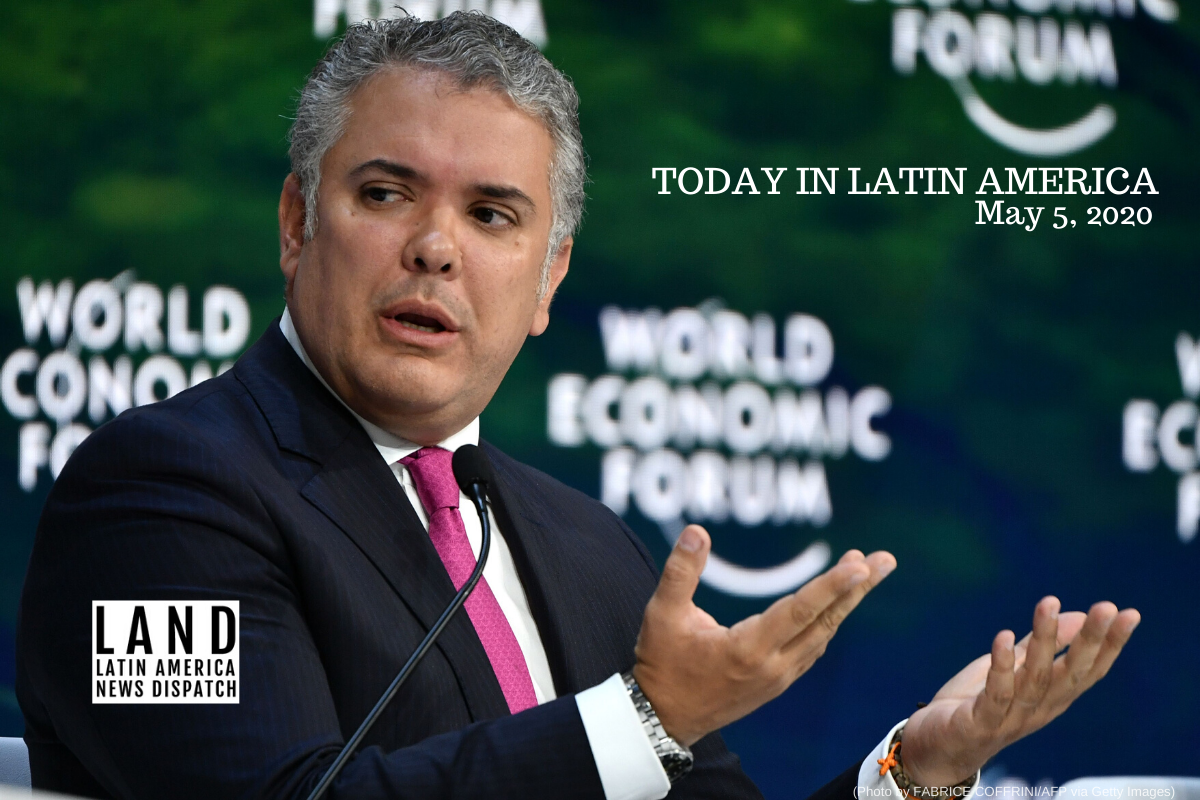 COLOMBIA: President Iván Duque signed a $844,000 public relations contract using money from the president’s Peace Fund, according to a report by Semana News. The Peace Fund was established in 1997 to “finance peace programs aimed at the reincorporation into civilian life of groups raised in arms.”

The investigation found that the President’s office entered a contract with the marketing firm Du Brands SAS to manage “digital strategy, social networks and content” as part of the “definition and implementation of the image strategy and online positioning of the Presidency.”

Director of Communications for the Presidency, Hassan Nassar, said that the Peace Fund exists for expenses of the president that “have to do with peace” and that “the messaging communication of this administration has always had its foundation in stability and peace.”

The existence of the contract was revealed following reporting over the weekend that the military has surveilled at least 130 journalists, human rights defenders, and opposition leaders. Yesterday, the Truth Commission, a mechanism of the country’s transitional justice system, formally requested the Defense Ministry release all information relating to the illegal army surveillance. The army has not disclosed who ordered the spying.

CHILE: Health Secretary Paula Daza announced yesterday that coronavirus cases have passed 20,000. As of Monday evening, Chile had 20,643 confirmed cases of coronavirus and 270 fatalities caused by COVID-19. According to Health Minister Jaime Mañalich, the number of hospitalizations and deaths has plateaued, but could take a turn for the worst as winter approaches the southern hemisphere.

VENEZUELA: The government announced yesterday that eight “terrorist mercenaries” were killed and two U.S. citizens arrested in a failed coup attempt on Sunday. Former Green Beret Jordan Goudreau claimed responsibility for the attempted invasion. The Venezuelan government did not identify the captured Americans, but Goudreau identified them as Luke Denman and Aaron Berry. Goudreau alleged that he signed an agreement with opposition leader Juan Guaidó to launch an amphibious assault with 60 combatants to depose President Nicolás Maduro. Guaidó denies the accusations.

HAITI: In the midst of the COVID-19 pandemic, United Nations rights monitors are criticizing their own organization for not properly handling cholera. In a letter addressed to the Secretary-General António Guterres, 13 top UN officials urged the entity to do more, calling its actions so far as “deeply disappointing” and “illusory” to the Haitian people. The authors of the letter said that the cholera epidemic has killed more than 10,000 people in Haiti, while the UN has spent only $3.2 million from the $400 million initially pledged. In 2016, the entity admitted its peacekeepers were the source of the outbreak in the Caribbean nation.

GUATEMALA: Migrants who were living in the United States and were later sent back to Guatemala are facing discrimination, as locals accuse them of bringing the coronavirus to cities and indigenous villages that haven’t yet registered cases of COVID-19. Authorities say 100 Guatemalans deported in the last months have COVID-19. To prevent further stigma, the 225 newcomers expected to arrive this week will deplane with medical certifications stating they tested negative for the virus while staying at detention centers in the U.S. Even so, the Ministry of Foreign Relations in Guatemala said health authorities will examine the migrants and may hold them for up to four days in observation.

NICARAGUA: The European Council decided to add six Nicaraguan high officials to the EU restrictive measures list, stating that “no tangible advances have been made on democracy and human rights in Nicaragua.” The officials will now be banned from traveling and any assets they may have in European countries will be frozen. The six officials report directly to President Daniel Ortega, and were accused of human rights violations. One of them, Francisco Díaz, is the chief of Nicaragua’s National Police, and has already faced sanctions by the U.S. and Canada.

REGION: Migrants are being abandoned in desolate, resource-scarce areas of Mexico as governments scramble to close borders and ports, according to a report published yesterday by the Associated Press. One woman detailed her experience, as she was expelled from the U.S. to Mexico, where she was then dumped at the Guatemalan border by Mexican authorities. She said she was forced to sleep in the woods and told to go around the heavily-patrolled border by crossing through the mountains. 10,000 people are estimated to have been expelled from the U.S. since mid March.

REGION: The National Football League announced yesterday that it will move its games abroad back to the U.S. for the 2020 season. The league had originally scheduled a game at the Azteca Stadium in Mexico City. But the league moved the game, as well as four other games spread across two facilities in the U.K., back to the U.S. amid ongoing concerns about the coronavirus pandemic. The games are now slated to be held at the home teams’ facilities.

UNITED STATES: The U.S. 9th Circuit ruled yesterday that a Trump administration order requiring immigrants to prove that they can afford health insurance or pay out-of-pocket medical expenses will not take effect while the court case is heard. The lawsuit, filed by the Latino Network, argued that the policy would cause family separation. The ruling upheld a previous temporary injunction challenged by the federal government. The case will proceed with the injunction in place.