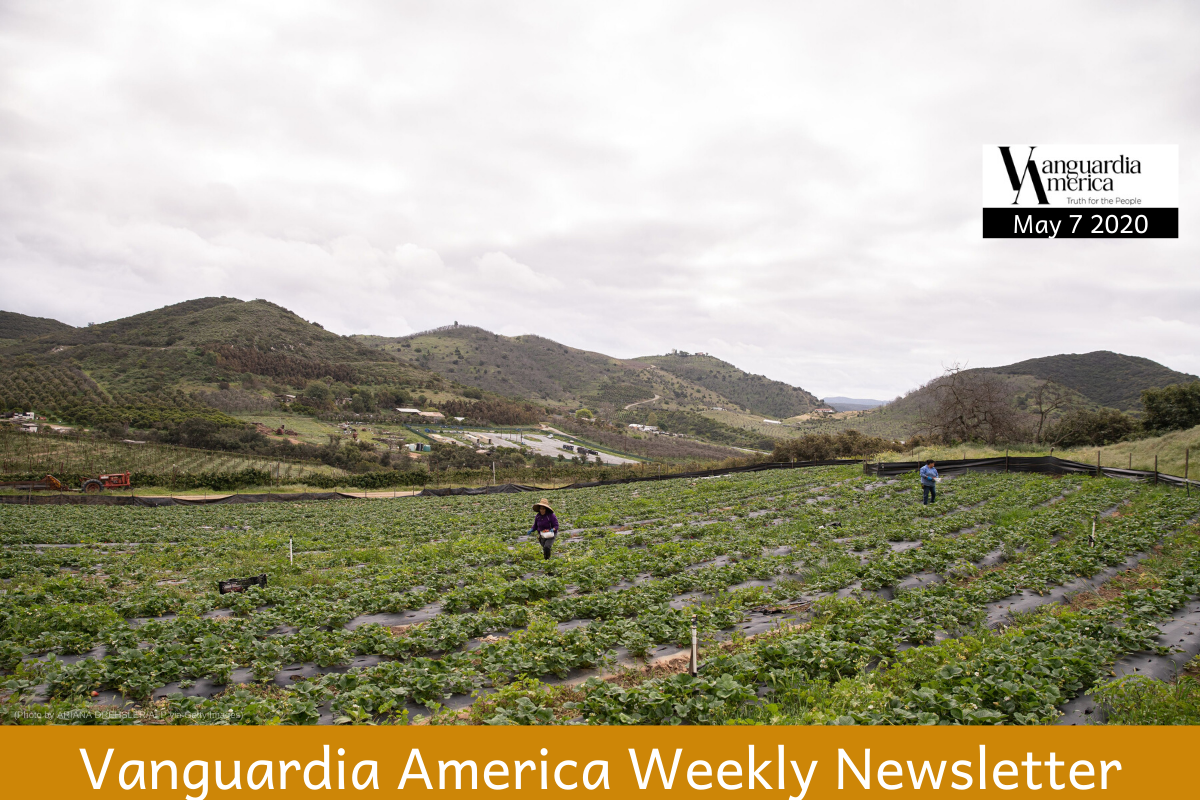 A national farmworkers relief fund is about a third of the way to reaching its $3 million goal, organizers said.

On Tuesday, May 5, a star-studded cast of entertainers, activists and community leaders took part in the Cinco de Mayo Altisimo Live Music and Pop Culture Festival to benefit the Farmworkers COVID-19 Pandemic Relief Fund. Latino Rebels was a media partner of the festival. Latino Rebels is owned by Futuro Media Group which produces Latino USA.

About $323,000 was raised during the event, and another $600,000 was donated by major sponsors. The online festival is archived at Altisimolive.com, and the public is invited to give to the fund through the end of May.

The fundraiser was the brainchild of Justice for Migrant Women and Hispanics in Philanthropy (HIP).

“As all of us grapple with the onset of COVID-19, [but] farmworkers continue to go to work. They are essential workers,” said Mónica Ramírez, founder and president of Justice for Migrant Women. “We’re deeply concerned about them and their welfare. They pick, plant and pack the food that we eat.”

Ramírez is a former co-host of Latino Rebels Radio.

So-called frontline workers are among the most at risk in the nation to contract the coronavirus, say health officials. Nationwide, Latino and African American communities have recorded some of the highest rates of infection.

Money raised for the fund will benefit 25 “farmworker-serving organizations” in the U.S. and Puerto Rico, say organizers, by helping pay for food, formula, diapers, emergency financial assistance for medical needs and other support during this COVID-19 crisis.

During an online town hall hosted by the League of United Latin American Citizens (LULAC), Democratic presidential candidate Joe Biden criticized the Trump administration for failing to protect meat and poultry plant workers, a large percentage of whom are Latino.

“They designate them as essential workers and then treat them as disposable,” Biden told the audience hosted by LULAC.

Thousands of workers at meat and poultry plants nationwide have tested positive for COVID-19. At least 20 workers have died.

President Trump has ordered meat, pork and poultry plants nationwide to remain open, amid growing fears of meat shortages. He has also backed efforts to grant the plant owners protection from lawsuits filed by workers.

“Meatpacking has always been hard work,” said Biden, the Democrats’ presumptive nominee for president. “It’s always been dangerous, it’s always been underpaid and now add to that the threat of COVID-19, made all the worse by fear that workers are living with every single day.”

Edgar Ramírez’s father, Edgardo, worked at a meatpacking plant in Iowa, NBC Latino reported. The family says Edgardo contracted COVID-19 and is now on a ventilator. Ramírez’s mother and sister now have the coronavirus.

“My mother cries every night wondering whether she is going to see my dad again,” Ramírez, who works for the Center for Health Equity Transformation at Northwestern University, told NBC Latino. “This has caused so much trauma to the Latino community especially, but also to immigrant communities across the country,” he added.

Huerta, who turned 90 in April, co-founded the United Farm Workers of America with César Chávez and coined the phrase “Sí se puede.” Despite her age, Huerta remains active in a wide range of progressive causes, including the Dolores Huerta Foundation.

In an interview with The Associated Press, Huerta pledged to do “whatever I possibly, humanly can to make sure that Joe Biden gets elected.” She appeared Sunday online as part of a Todos Con Biden, or Everyone with Biden, live-streamed event with actor-comedian John Leguizamo, Congresswoman Veronica Escobar, an El Paso Democrat, and former U.S. Labor Secretary Hilda Solis.

Biden had trouble gaining ground among Latino voters in the Democratic primaries against progressive firebrand, Vermont Senator Bernie Sanders, who has since dropped out of the race.  Newsweek reported this week that the Biden campaign “is launching a multimillion-dollar Latino vote campaign after recent polling showed lagging enthusiasm among [Latinos], including evidence that he needed to invest heavily to attract Latino men to help him secure the presidency…”

Biden’s outreach effort is aimed at Florida, Arizona, Colorado, Nevada, and Texas (all states with large Latino populations). In addition, targeted investments will be “aimed at smaller Latino communities in the Midwest states of Michigan, Wisconsin, and Pennsylvania, where Trump won by razor-thin margins,” Newsweek reported.

President Donald Trump’s campaign is making a major push to lure Latino voters, more than 70 percent of whom supported Hillary Clinton for president in 2016.