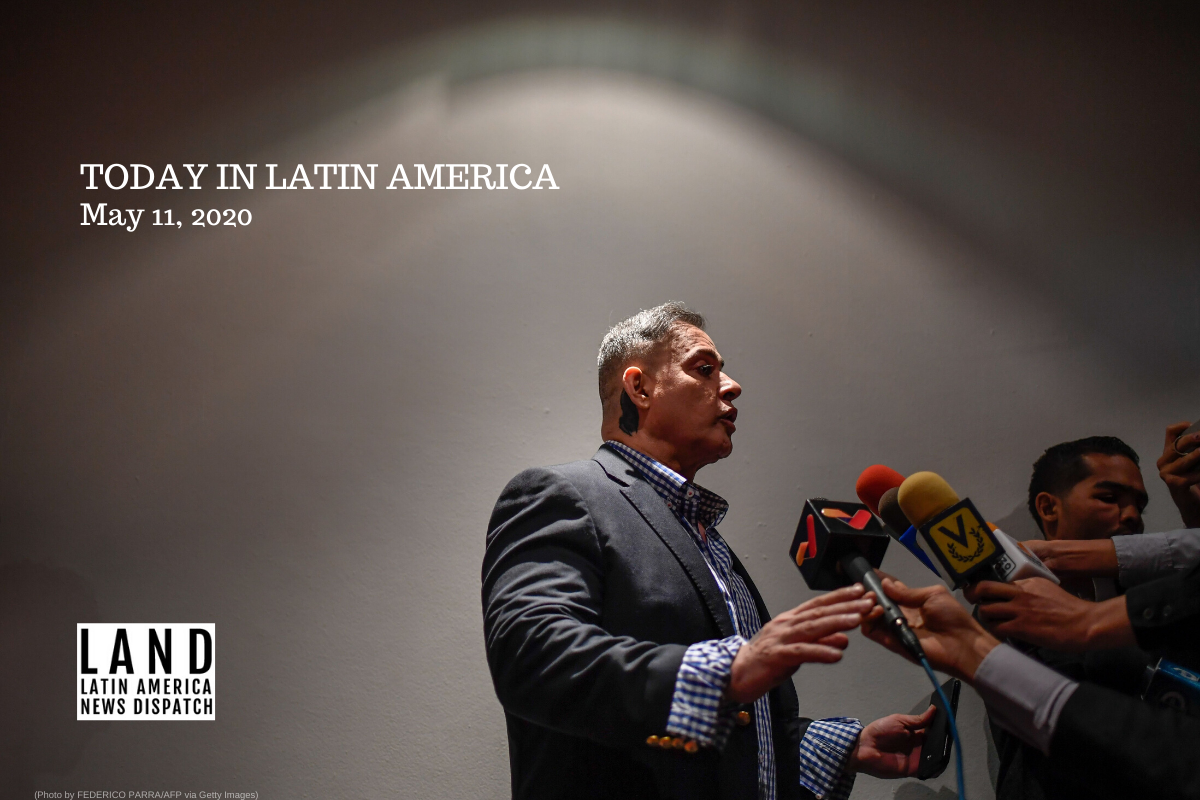 Venezuela's Attorney General Tarek William Saab talks to the press after a press conference in Caracas on January 24, 2020. (Photo by FEDERICO PARRA/AFP via Getty Images)

Rendón admitted that he and Vergara had paid Goudreau $50,000 for expenses. Goudreau’s company, Silvercorp USA, once worked for the Trump campaign and employed the two Americans detained in the attack, former special forces soldiers Luke Denman and Airan Berry.

Venezuelan officials have also accused Colombia of assisting with the operation. Soldiers seized three ships on Saturday which soldiers found loaded with machine guns and ammunition, but no crew, on the banks of the Orinoco river. Colombia’s navy said preliminary evidence suggested the current dragged the boats away.

Colombian President Iván Duque, President Trump and Guaidó deny any involvement in the scheme. Venezuela’s Saab did not name Guaidó as one of the 22 new arrests he said the country would order.

BRAZIL: President Jair Bolsonaro jet-skied to a floating barbecue on Brasília’s Paranoá lake on Saturday. The event took place just hours after the leader cancelled a barbecue at the presidential palace that would have defied the recommendations of his health ministry. On social media, Brazilian leaders denounced Bolsonaro’s lake trip and overall handling of the COVID-19 pandemic. Currently, Brazil has 162,699 confirmed coronavirus cases, with 11,123 fatalities. Public health experts predict the country be the next epicenter of the pandemic.

BRAZIL: The Supreme Court overturned guidelines banning men who have sex with other men from donating blood for 12 months in a Friday decision. The ruling follows similar announcements from other countries loosening restrictions on blood donations during the COVID-19 pandemic. Policies limiting donations from gay and bisexual men began during the AIDS crisis of the 1980s, but have been widely criticized as discriminatory in recent years. In Brazil’s ruling, minister Edson Fachin argued that the restrictions were unconstitutional and prejudiced.

COLOMBIA: Avianca, the country’s largest airline, filed for Chapter 11 bankruptcy in the U.S. Southern District of New York on Sunday. Avianca was founded in 1919 and it is the third-largest airline in South America. Travel restrictions during the coronavirus pandemic have grounded its fleet. “Avianca is facing the most challenging crisis in our 100-year history as we navigate the effects of the Covid-19 pandemic,” said CEO Anko van der Werff in a statement.

HAITI: The first delivery of medical and protective supplies ordered from China last week arrived last week. The equipment cost more than $18 million total and will arrive by five flights spread over one to two weeks. The shipments include beds, respirators, surgical masks, and protective glasses.

NICARAGUA: About 400 Nicaraguans are still waiting to return to their home country after the country closed its borders. Many have lived abroad for several years, but after losing their jobs in the pandemic, want to reenter Nicaragua. At least 44 are stuck in El Salvador, 160 in Cayman Islands, and 200 in Panama, the country with the highest official case count in Central America.

U.S.-MEXICO BORDER: The U.S. government awarded a $275 million contract for border wall construction to the Caddell Construction Company based in Alabama. The construction, which is expected to begin in 2021 if President Trump is reelected for a second term, would extend 14 miles along the Rio Grande in and near Laredo, Texas. Since taking office, Trump has overseen the construction of 162 miles of new wall, falling short of a promised 500 miles. News of the contract came days after the Washington Post reported that Trump is pressing for a black-painted fence, arguing that it would be too hot to climb. The change could raise costs as much as $500 million.

MEXICO: Police arrested two men Saturday for the strangling and killing of three sisters in the northern state of Coahuila. Two of the women, Cecilia Pérez and Dora Pérez, were nurses at public hospitals, while the third sister, Araceli Pérez, worked as a hospital administrator. Their deaths stoked fears about increasing violence against Mexico’s healthcare workers, but Governor Miguel Ángel Riquelme said in a press conference that the government has ruled out the women’s professions as a possible motive for the attack. Authorities believe the two suspects were attempting to rob the women.

MEXICO: Government officials have shut down 42 public markets country-wide amid concerns of coronavirus spread on Mother’s Day. Officials also closed pastry and flower shops, while some officials proposed having a virtual Mother’s Day or postponing the celebration by a month. Flower shop business owners are concerned about the loss of revenue from COVID-19. President Andrés Manuel López Obrador and his wife took the opportunity to honor mothers in a video tribute that was later taken down from YouTube for copyright infringement over the use of the song, “Eternal Love” by Juan Gabriel.