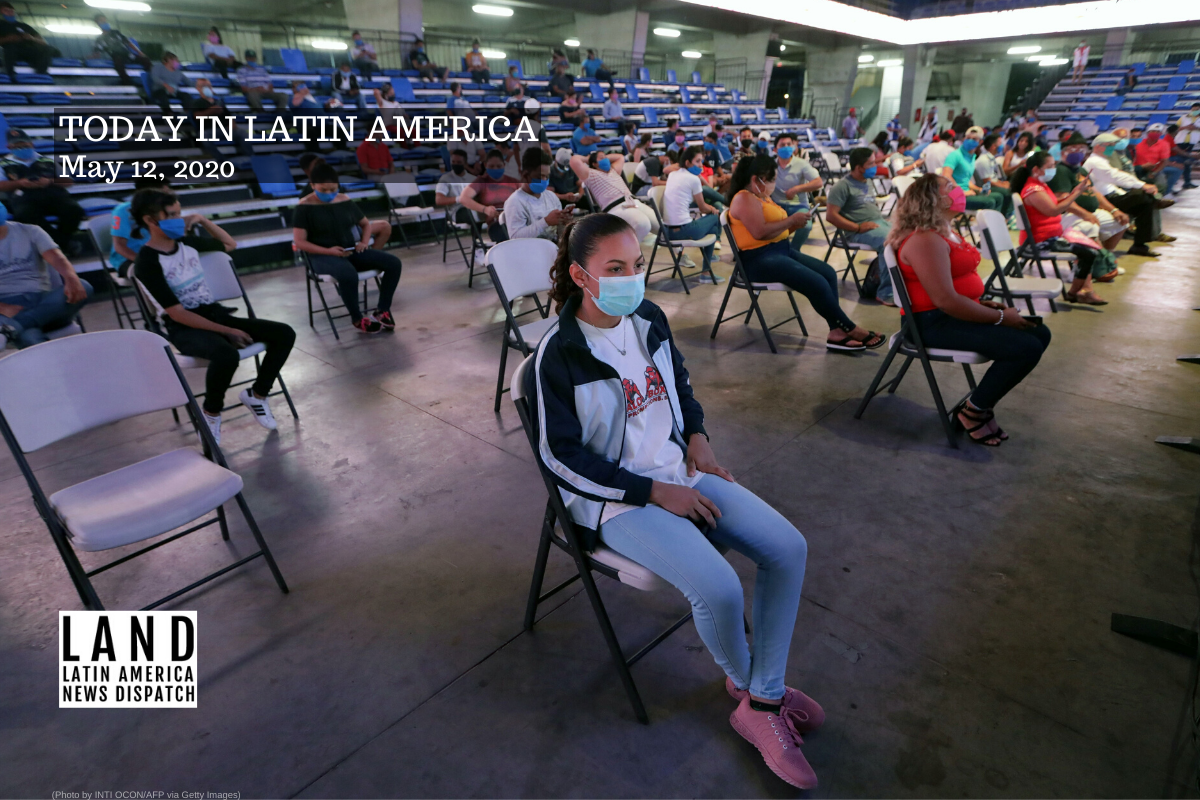 People wear a face mask and keep social distance to prevent the spread of the new COVID-19 coronavirus, while attending the boxing evening at the Alexis Arguello Sports Center, in Managua on April 25, 2020. (Photo by INTI OCON/AFP via Getty Images)

NICARAGUA: Monday was the sixth day that President Daniel Ortega’s administration did not provide new figures of COVID-19 cases. The administration has only reported 16 confirmed cases and five deaths due to the coronavirus. Officials say there is no community spread. However, public health experts warn that hospitals are receiving patients with suspicion of coronavirus every day. An independent Citizen’s Observatory has documented 781 suspected cases.

“We live two parallel realities, the one of the government, denying the pandemic, and the reality that doctors and the general public experience,” said infectious disease specialist Carlos Quant. Some families report that their loved ones died after having symptoms that match the ones caused by the disease. The bodies of the deceased are being sent to burial without testing.

Vice-President and Ortega’s wife Rosario Murillo questioned these testimonies and said they only harm the country.

There are numerous, credible reports of much wider #COVID19 contagion in #Nicaragua than official numbers show.

Ortega should level with Nicaraguans about what’s really happening, fulfill the duties of his office and protect the Nicaraguan people

Meanwhile, Acting Assistant Secretary for U.S. Department of State’s Bureau of Western Hemisphere Affairs, Michael Kozak, tweeted that “there are numerous, credible reports of much wider COVID-19 contagion in Nicaragua than official numbers show,” and urged Ortega to “fulfill” his duties and “protect the Nicaraguan people.”

VENEZUELA: Juan José “JJ” Rendón and Sergio Vergara resigned from their positions as advisors to opposition leader Juan Guaidó. According to an AP investigation, the advisors had signed a contract with U.S. Green Beret veteran Jordan Goudreau to lead a band of mercenaries to depose President Nicolás Maduro. Rendón admitted paying Goudreau $50,000 to cover initial expenses. Guaidó accepted the resignations and thanked the two for their “commitment to Venezuela.” JJ Rendón is a political strategist who has served presidents all over Latin America including Colombia’s Juan Manuel Santos, Chile’s Sebastián Piñera, Mexico’s Enrique Peña Nieto, and Honduran Presidents Juan Orlando Hernández and Porfirio Lobo. He has also advised Venezuelan opposition leader Henrique Capriles.

ARGENTINA: Alberto Fernández’s government extended debt negotiations yesterday to May 22 in an attempt to prevent the country’s ninth default in 200 years. The extension comes after a Friday deadline passed and creditors rejected the government’s proposal to restructure over $65 billion in debt. The new negotiation deadline coincides with the due date of a $500 million interest payment that could trigger a default. Fernández’s administration says it cannot afford more in debt payments as the country faces the coronavirus pandemic.

BRAZIL: Vice President Hamilton Mourão and Defense Minister Fernando Azevedo e Silva announced yesterday a military operation to combat illegal logging and deforestation in the Amazon rainforest. The government allocated 3,800 army troops alongside environmental authorities to prevent the spike in fires seen last year that caused international outrage. The operation comes after President Jair Bolsonaro issued a decree last week allowing for the deployment of the army in the region.

PANAMA: Panama’s public television started broadcasting classes for students from first to sixth grade who do not have internet access. The classes will be held from 9 a.m. to 11 a.m, Monday through Friday, each day with a different subject. Next Monday, the Education Ministry will launch the TV classes for elementary school and high school. Since March, students have already had access to radio classes, setting the beginning a strategy that, according to Education Minister Maruja Gorday, will continue until 2021, when students will likely be able to go back to schools.

MEXICO: President Andrés Manuel López Obrador released a decree broadening the use of the military for policing until 2024, eliciting concern from human rights groups, who say the army and navy are prone to abuse. The new National Guard launched in the middle of last year and spent its first assignment policing Mexico’s southern border. Since then, AMLO’s administration has deployed its members to a variety of other responsibilities, a trend that supporters say was built into the decree creating the force. Opponents say there is insufficient oversight, especially in a country with a recent history of human rights violations by the military.

MEXICO: An imprisoned leader of the Los Zetas drug cartel died of COVID-19 at the Puente Grande federal prison in Jalisco. Moisés Escamilla May, 45, was serving a 37-year sentence for crimes including his role in the decapitation of 12 people. As of Saturday, local media reports 74 confirmed cases of the coronavirus at the prison, most without symptoms. Inmates have brought lawsuits to have their human right to health care respected at the Puente Grande prison and increase access to testing and spaces for self-isolation.