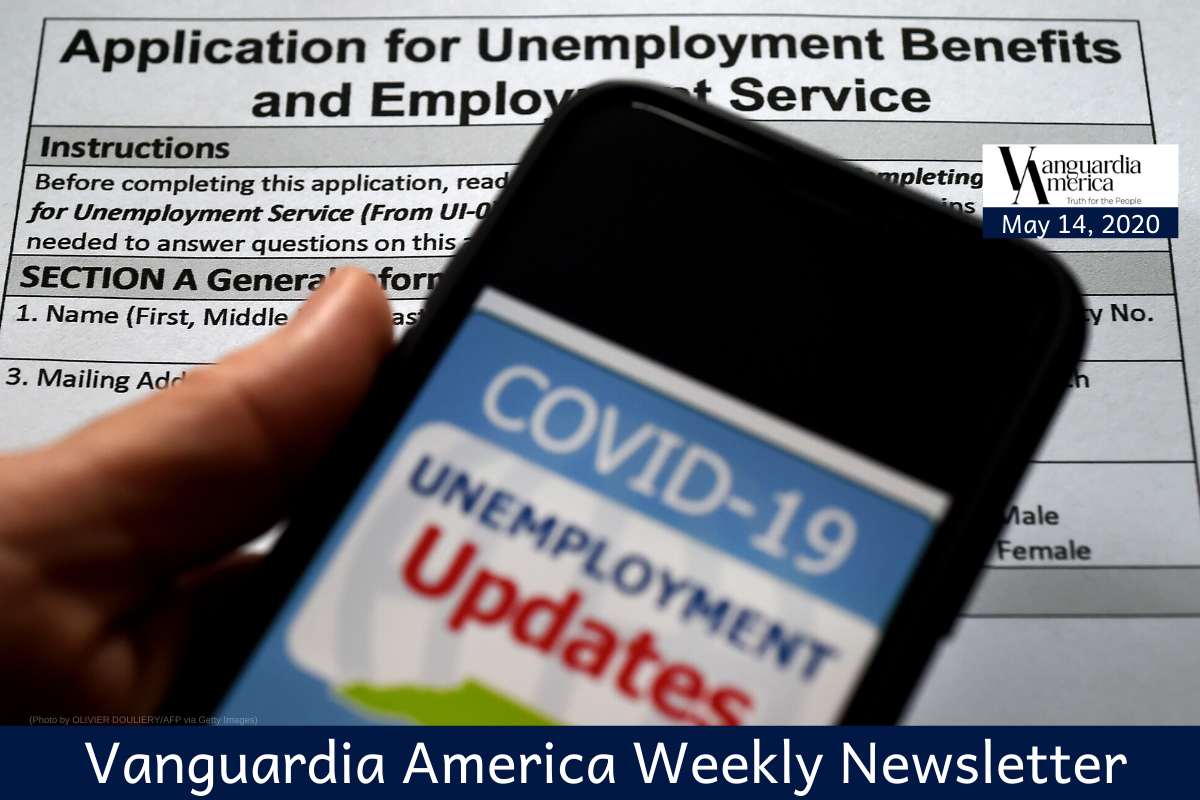 In this photo illustration, a COVID-19 Unemployment Assistance Updates logo is displayed on a smartphone on top of an application for unemployment benefits. (Photo by OLIVIER DOULIERY/AFP via Getty Images)

At 18.%, Latinos have the highest unemployment rate in the U.S, while the jobless rate for workers nationwide stands at 14.7%, a figure not seen since the Great Depression, according to data released by the Bureau of Labor Statistics.

The true unemployment rate for all U.S. workers is likely even higher, since the data released last week reflects conditions only through mid-April.

“This devastating economic data affirms that Hispanic and African American communities have been disproportionately impacted during this pandemic,” said Sindy Benavides, CEO of League of United Latin American Citizens (LULAC), adding that “minority-owned small-businesses have been shut out of [Paycheck Protection Program] loans and unable to keep workers on payroll.”

According to a recent report by UnidosUS, Latinos are 17.6% of the total U.S. workforce, but they make up large segments of so-called essential workers, including 54% of agricultural workers; 38.8% of food manufacturing workers; 29% of medical assistants; 20.5% of grocery store workers; and 18.8% of transportation and utility workers.

“The official unemployment numbers are reminiscent of the Great Depression and confirm what we see in our communities: lines of cars that look like a parking lot, waiting at the local food bank,” Rep. Joaquin Castro, a Texas Democrat and chair of the Congressional Hispanic Caucus, told NBC Latino.

Castro and Benavides called on Congress to do more to help communities, like Latinos, who have been more severely impacted by COVID-19 and the ensuing economic crisis.

Christy Smith, a Democratic state assemblywoman, has conceded to first-time candidate Mike Garcia in a special election for California’s 25th Congressional district. With 76% of the precincts reporting, Garcia, a defense industry executive, was up by 10 percentage points, 56 to 44%, when Smith announced she would concede.

“It is clear that our message of lower taxes and ensuring we don’t take liberal Sacramento dysfunction to Washington prevailed,” Garcia said in a press statement.

Despite Garcia’s decisive win, the candidates are expected to face each other again in the November 3 general election. Both have announced they plan to seek a full term in Congress. Political analysts say Smith has a better shot of winning in the fall when the electorate will be younger and more diverse.

“This campaign is about you – and our community – and there is no doubt in my mind that together we will prevail in the fall general election,” Smith said in a post to voters on her campaign’s Facebook page.

The seat was vacated by the resignation of Democrat Katie Hill in October in the wake of a scandal last year that Hill blamed on her ex-husband.

Disney Plus will stream Lin Manuel Miranda’s Hamilton on the eve of this year’s  Fourth of July holiday. The Tony-award winning musical was originally slated to hit the big screens in 2021, but will not stream on July 3.

Variety magazine reports the film is not a remake of a play for cinema, like Miranda’s upcoming adaptation of In the Heights or Steven Spielberg’s screen version of West Side Story. Instead, Hamilton was recorded live as the musical was staged at the Richard Rogers Theatre in New York City. It features the original Broadway cast.

NO Productions and the Coalition for Humane Immigrant Rights (CHIRLA), the largest immigrant rights organization in California, will broadcast and stream a two-hour music festival May 23 featuring dozens of entertainers.

Cuídate y Cuéntate will be emceed by Nour Milla and Rafael Sigler. Organizers say it was created to raise awareness about the need for greater Latino civic engagement in the era of COVID-19 and the importance of completing the U.S. Census.

“The Covid-19 crisis has demonstrated two major realities: how much immigrants and Latinos contribute to our society, especially in challenging times, and how important participating in Census2020 is so we can challenge all the inequality that still exists,” said CHIRLA Executive Director Angélica Salas.

Audiences can watch the concert on the LATV Network or live-streamed via YouTube, Facebook and IGTV. The show will also air live on KWHY 22 (digital channel 4), a Spanish-language TV station in Los Angeles.

The show is scheduled for 7 p.m. ET and 4 p.m. PT, May 23. For a full schedule of performers and other guests, check out the Cuídate y Cuéntate website.