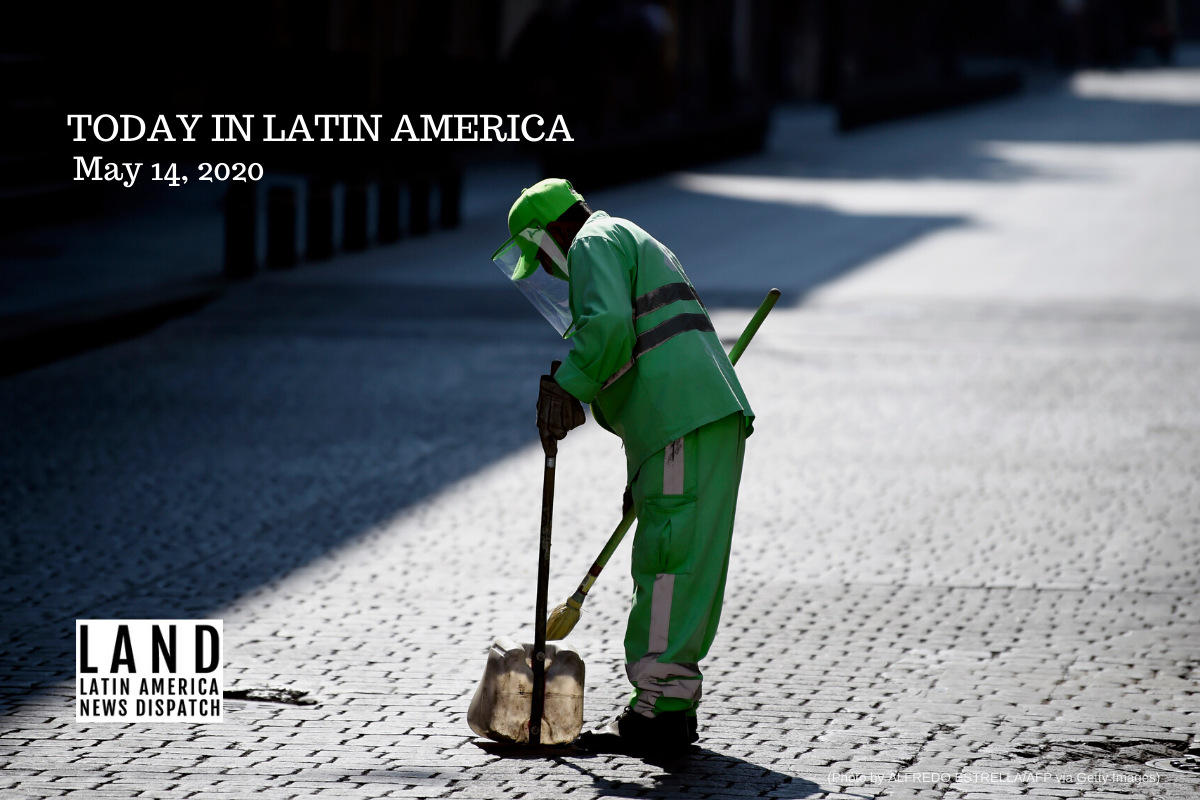 A worker cleans a street wearing a face shield in Mexico City, on May 12, 2020. (Photo by ALFREDO ESTRELLA/AFP via Getty Images)

MEXICO-BRAZIL: The two largest countries in the region reported their highest coronavirus death tolls in a single day on Tuesday, as the World Health Organization (WHO) says the Americas are at the center of the pandemic.

Mexico reported 353 new deaths and 1,997 new cases Tuesday night. The figures renewed concerns about Mexico’s response to the pandemic, as daily death tolls continue to rise. Investigations by the New York Times, the Wall Street Journal and El País suggest that the Mexican government is undercounting COVID-19 cases and deaths. On Wednesday, President Andrés Manuel López Obrador said the country’s “flattening of the curve” will allow for the reopening of the economy. Mexico has been under pressure by U.S. officials to open businesses.

Brazil also reached its highest number of daily deaths, with 881 reported on Tuesday. It is now the sixth worst affected country in the world, and health professionals continue to call on President Jair Bolsonaro to institute a mandatory lockdown. As of Tuesday, only 12 cities have enacted quarantine restrictions. Bolsonaro has yet to comment on the escalation of deaths, even as healthcare workers took to the streets Tuesday evening in protest. Brazil now has 180,000 confirmed cases and more than 12,000 deaths, according to data from Johns Hopkins University.

COLOMBIA: A state prison in the city of Villavicencio has reported more than 850 COVID-19 infections among prison inmates and staff members in one of the worst outbreaks across the country. Prison director Miguel Ángel Rodríguez said in a virtual press conference Tuesday that the outbreak can be linked to overcrowded facilities and a shortage of doctors in the prison system. Rodríguez also accused the Colombian government of “abandoning” the prison at the height of the pandemic. Doctors at Villavicencio prison refused to return to work last week after they were denied appropriate personal protection equipment. Authorities also stopped an attempted jailbreak two weeks ago, led by inmates who feared the spread of the novel coronavirus.

VENEZUELA: Federal authorities announced they will file criminal charges against a former warden and five guards who were accused of using excessive violence during a prison riot that resulted in the deaths of 47 inmates. The May 1 riot at La Llanos Penitentiary Center was originally reported as a jailbreak, but human rights organizations urged the government to launch an official investigation. Authorities concluded the riot was a result of inappropriate living conditions as prisoners demanded more access to food and water. Attorney General Tarek William Saab called the actions of prison officials “reprehensible,” but said the charges would also extend to the four inmates who incited the riot.

PUERTO RICO: Starting today, 32 out of the 109 public school cafeterias that are currently operating will be temporarily closed as well as four food warehouses, the Department of Education announced yesterday. The closure comes after 50 workers became infected with the new coronavirus, sending 278 others into preventative quarantine after having had contact with the employees. The government initially refused to reopen school cafeterias — which were ordered to close down under the government’s lockdown that began in mid-March — but announced on April 29 that a fraction of the island’s 854 public schools could reopen. Hours after the closure was announced, Sen. Bernie Sanders and Rep. Nydia Velázquez introduced a bill to increase Puerto Rico’s access to the Supplemental Nutrition Assistance Program (SNAP), a federal initiative that grants funding to combat food insecurity.

REGION: The governments of Panama, Costa Rica and Honduras have all announced reopening measures for their countries that will go into effect this week. In Panama, a portion of economic activity resumed yesterday as part of Laurentino Cortizo’s six-phase reopening plan. The first phase in Panama included restarting technical and maintenance services — all of which must operate following the guidelines set forth by the country’s Health Ministry as well as the public health measures in place under the national quarantine announced in March. In Costa Rica, the government announced that the country would move on to phase two of its reopening plan starting May 16, under which beaches and some national parks will be able to reopen. The Costa Rican government is assessing reopening measures, which began on May 1, every two weeks to determine which restrictions to lift and how. When it comes to Honduras, the construction sector partially restarted on May 11 as officials look to reopen manufacturing factories on May 18.

MEXICO: President Andrés Manuel López Obrador said Wednesday that Mexico’s economy is set to reopen next week following mounting pressure from U.S. officials. Construction, mining and car manufacturing are expected to resume operations by May 18, despite high death rates continuing to rise. The country’s lockdown will remain in place, with only “essential activities” returning, according to the General Health Council. Schools and businesses in areas with a low number of cases —dubbed “municipalities of hope”— will also reopen May 18.

On June 1, a three-phase plan with a color-coded “spotlight” system will state what activities are allowed in public spaces. The auto industry also appears eager to get back to work as huge job losses have taken a toll on the U.S. and Mexico. López Obrador said reopenings would be left up to individual states to decide how to proceed, but many fear that lifting restrictions could get the pandemic “out of control.”

U.S.-MEXICO BORDER: U.S. President Donald Trump has drastically increased the deportation of migrant youths, while border agencies have attempted to restrict asylum claims and border crossings during the pandemic. The Trump administration has been expelling migrant youths under an emergency declaration citing the coronavirus pandemic. In April alone, 600 minors were deported. The U.S. has closed its consulates abroad, as well as most immigration courts, but authorities have continued to charter deportation flights, according to Vox. Advocates have been urging the Trump administration to halt deportations to avoid spreading coronavirus in Central America and the Carribean. Several countries have reported positive cases among immigrants deported by the U.S., including more than 200 cases in Guatemala, at least two in Mexico and three in Haiti.