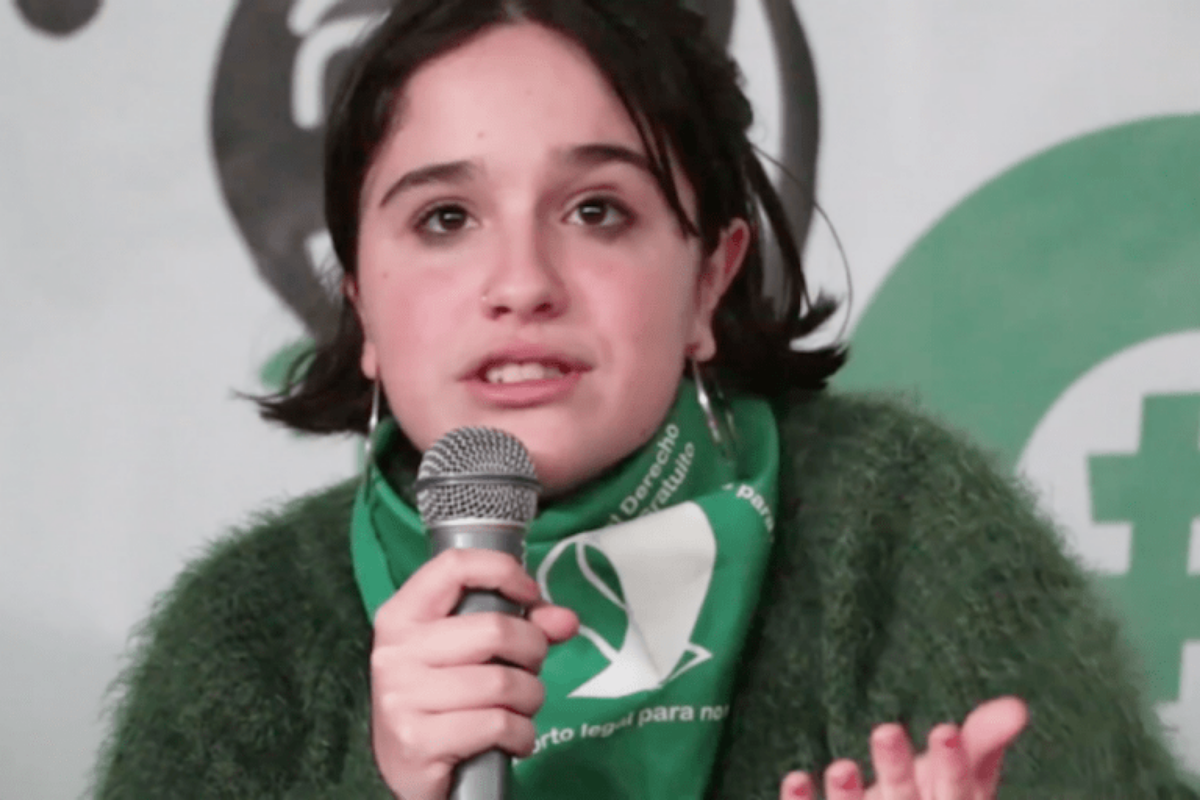 Editor’s Note: The following story contains language in Spanish that might be offensive to some readers.

“How scared you are of a girl, you chicken sh*ts,” tweeted Ofelia Fernández the day her trolls took it to a new level. It was November 2019, and she had just been elected as the youngest lawmaker in Latin America as a member of the Buenos Aires City Legislature. At only 19 years old, she won a seat in the local capital with the Frente de Todos party—the same that took the Alberto Fernández-Cristina Kirchner formula to the presidency.

By the time she wrote the tweet, Ofelia had been popular in politics and social media for over a year, but the attacks that week had become personal: They were aimed against her mother, Eva Mosso, alleging she was involved in state corruption.

“I got into this knowing it’d be tough but not this violent. It wasn’t enough to call me a parasite and lie about me, but now you’re using the most basic card: corruption,” she continued on her Twitter thread. “And because you can’t call a 19-year-old crooked, you mess with my mother.”

Internet trolls had been accusing Ofelia’s mother of being a part of the alleged Ruta del dinero K (K’s money route), which is how the media refers to the alleged corruption committed by el kirchnerismo, the political movement built by former presidents Néstor and Cristina Kirchner. Courts dismissed most of these accusations, and there was no evidence nor real complaints that had been filed against Ofelia’s mother. Once again, internet trolls —mainly coming from pro-life organizations and right-wing parties— created the viral campaign to undermine Ofelia’s legitimacy. That afternoon, when Ofelia finally lost her patience, she called the trolls “basic and perverse.”

It wasn’t the first time her detractors wielded lies against her on social media, and it certainly wouldn’t be the last: fake news, misogynist insults, and troll attacks against women in politics in Argentina are systematic and grow every day. Still, Ofelia is learning how to fight back.

What We Call Political Violence

Argentina became the epicenter of the international feminist agenda because of the massive reach of its #NiUnaMenos and reproductive rights movements. Launched in 2016, the Ni Una Menos campaign and march extended worldwide. Then, in 2018, three million people took to the streets to pressure lawmakers to pass the abortion bill, which spurred debates about women’s rights globally. In the 2019 election campaign, gender-based violence was a central topic on many progressive candidates’ agendas.

Due to these campaigns, lawmakers added political violence to the Law for the Integral Protection of Women (Law 26.485) at the end of last year, expanding its definition of gender-based. The law now recognizes and punishes conduct that aims to undermine the political rights of women.

A study by the Equipo Latinoamericano de Justicia y Género (ELA) found that women experience political violence as elected officers, candidates, and activists, underlining the need for an “intersectional approach” to political rights.

“What we call ‘social media violence’ are the violent acts mediated by technologies. These acts can cause damage to the status of women in politics or even discourage them from getting involved in politics. The most extreme cases lead to physical and sexual violence,” said Ximena Cardoso, who was part of an investigation that the ELA team developed over the last year around the subject of political gender-based violence on social media. Political violence on social media is empowered by the anonymity that the internet provides, guaranteeing impunity. “People don’t say these things to my face,” Ofelia added.

Physical appearance is habitually the basis for attacks against women in leadership positions. “They try to force you out of the political conversation by concentrating on your looks, your wages, your clothes,” said Ofelia. “There are hardly any moments in which hostility is aimed against a solid idea or something I said: It’s not an ideological conflict—it’s just obvious violence.”

In 2018, before the youth climate movement Fridays for Future created international networks of young activists, Ofelia was standing in front of parliamentary representatives in the debate for the abortion bill. She had just finished school at Escuela Carlos Pellegrini, one of the few secondary schools under the administration of the University of Buenos Aires, where she began her activist career and served as student union president. “El Pelle” is the type of school that produces politicians, intellectuals, and national artists. The video of Ofelia speaking to parliamentary leaders during the debate went viral. It was the first time her argumentation skills would become a social media sensation.

Ofelia started getting invited to TV shows, progressive radio programs, queer parties with popular trap artists —most of them her same age— and starred in campaign videos for feminist causes wearing colorful glitter on her face and advocating against conservative ideas. Her image connected not only with the youth, but with feminists of all ages across the country.

With the support of the political leader Juan Grabois and the Patria Grande organization, Ofelia announced her candidacy in June 2019. “I’m here be the voice of the youngest,” she proclaimed. On December 3, she was sworn in, pledging to represent the future of her generation across Latin America.

Earlier this year, U.S. Representative Alexandria Ocasio-Cortez faced criticism for wearing designer clothing on a TV appearance. “I rent, I borrow and thrift my clothes,” she tweeted. “Tempted to do a ‘woman on the street’ bit and wait outside the Republican cloakroom to ask each GOP Congressman how much their tailored suits cost.”

The Post is just mad that you can look good fighting for working families.

Sequins are a great accessory to universal healthcare, don’t you agree? ✨😉 https://t.co/xdQ65lbpXe

“I really look up to AOC and the way she behaves,” said Ofelia. “I’m so inspired by her. She’s older than I am but I feel we are alike in our desire to hack political representation. We are on the same quest: trying to transform the way that we represent ourselves and our people.”

Ofelia remembers finishing TV appearances or public appearances and running to get her phone to search for her name on Twitter. Millennials are used to building their personas with the feedback they get from others on social media—whether it’s how many likes a profile picture gets or how many retweets a statement reaches. Ofelia acknowledges that she sought therapy to learn to pay less attention to the responses she received on Twitter. Studying the backlash other female leaders such as Greta Thunberg or AOC received comforted Ofelia in an odd way. “Alexandria gets personally attacked by the president, he insults her, he is violent against her from the same depoliticized points that I get blindsided from. And she gets through it.”

There are tougher days, Ofelia admits, but starting to ignore the systemic aggressions helps: She is fully aware they are not stopping anytime soon.

“My critics used to be much more political. The attacks grew. Every huge step in my political career —such as announcing my candidacy, or winning the election, or assuming office— has had its wave of violence. With every ‘good’ thing that happens to my career, they always have something to overpower it.”

#HappyBirthdayHomophobe was trending last month on Twitter due to a new campaign against Ofelia, under which people interpreted old posts from her Facebook wall —from when she was 12 years old— as homophobic messages. The day she turned 20, internet trolls focused on installing the trending topic, which they gained successfully. Oftentimes, she can’t just ignore these campaigns.

“I find it important to answer sometimes, to give my perspective on what they are saying about me. They make me a trending topic on Twitter because they say I’m homophobic—well, I’ve got to answer to that and show they’re making it up,” she said. “Sometimes people advise that I just ignore these messages. But it’s not so easy.”

Her insight into how young people choose to handle these aggressions demonstrates the future of politics: Conversations over the internet matter, as our characters are increasingly determined by how we behave —and are received— on social media.

The question behind all of these systemic attacks is, after all, what triggers this seemingly unstoppable violence against a 20-year-old woman and her peers. Ofelia believes it is her ideas, although they are not the target of criticism.

“They’re annoyed because we [feminists] carry an agenda that was never a part of politics before,” she said.  And she does not leave her political comrades out of the discussion: She knows that most of the men in her party are also in the process of deconstructing the traditional ways of doing politics in Argentina.

“Being a man and having political power is an extremely privileged position,” she told me. “And now there’s this huge movement demanding they question these privileges by pointing out that they make no sense. It’s a personal contradiction, and it’s really tough.”

As political violence has become a legally punishable form of gender-based violence, progressive female leaders recognize each other and unite against hate speech. And when collective organizing is not enough, Ofelia deals with her stress in the same way any other young woman her age does.

“Whenever I’m about to collapse, I listen to the saddest song I like at the moment to help me cry and liberate some tension,” she said.

This story was co-published by the Latin America News Dispatch and NACLA.

Lucía Cholakian Herrera is a freelance journalist based in Buenos Aires. She reports human rights stories, feminist struggles and investigates identity in contemporary Latin America. She has won a Premio TEA for her coverage on sexual assault trials in Buenos Aires. Twitter: @queendelqueso.