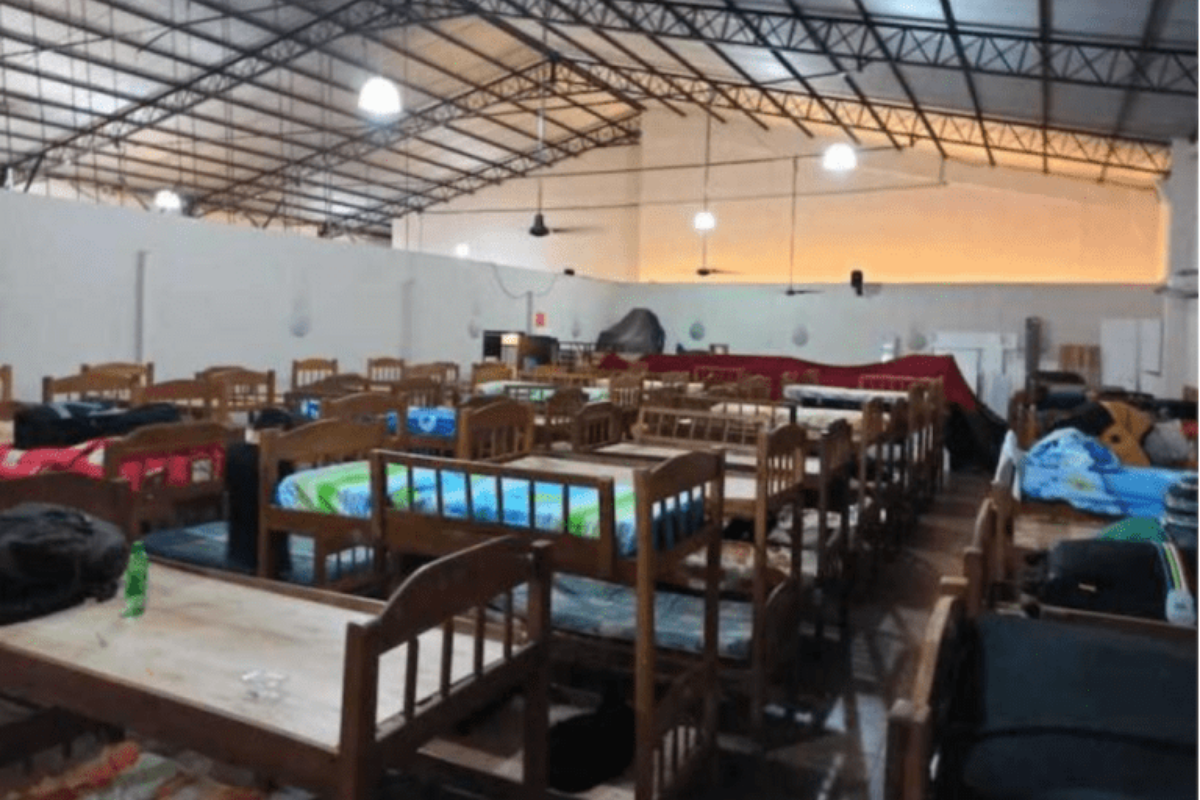 In late April, 20-year-old Nelson slept for three nights on the sidewalk of the Friendship Bridge that links Paraguay with Brazil over the Paraná River. Along with 84 other people, he was waiting to enter Paraguay, where the borders had been closed since March 24 to prevent the spread of the coronavirus.

Nelson is one of the estimated 500,000 undocumented Paraguayan and Bolivian migrants working in slavery-like conditions in the Brazilian textile industry. Unable to sustain themselves as businesses shutter due to the pandemic and Covid-19 deaths in Brazil escalate rapidly, many are desperately seeking to return home.

The Paraguayan Ministry of Public Health and Social Welfare (MSPBS) follows World Health Organization recommendations of a 14-day preventive quarantine for returnees. The government, however, has been unable to quickly accommodate the hundreds of migrants arriving at its borders. The situation is particularly tense in Ciudad del Este, Paraguay’s second-largest city, with a backlog of individuals waiting long hours and even days at the border. This ordeal is exacerbated by a lack of medical attention and limited access to food and toilets.

In an unprecedented move applauded by most Paraguayans, the government imposed a strict quarantine on the general population and closed its borders in March when only two cases of Covid-19 had been identified. These measures aimed to protect a weak public health system and have resulted in one of the lowest rates of confirmed cases in South America. Juan Carlos Portillo, Director of Health Services at the MSPBS, estimated that the country’s response prevented 15,000 potential deaths.

But this preemptive success came with a high price for the migrants entering the government-run shelters. According to the National Secretary of Intelligence, as of May 20, the government had 55 shelters housing 3,549 returnees. At these sites, the safety and rights of individuals are being overlooked as the pandemic quickly spreads.

Following WHO recommendations, Paraguay legislated public health measures for returnees, who are “expected to comply with preventive isolation in a shelter or other place.” But rather than individual isolation at home or in hotels —an approach applied in Argentina and other countries— up until now Paraguay has mostly implemented isolation in groups. The government has adapted existing infrastructure of military bases, warehouses, police stations, and even indoor sports complexes to accommodate large groups of individuals—including pregnant women, underage children, and the elderly.

Most of these facilities do not comply with the MSPBS’s public health protocols of ensuring social distancing and access to medical attention. Groups of up to 160 people are housed in rooms of closely placed bunk beds, and shared spaces do not allow for adequate physical distance. Meanwhile, shared bathrooms and a lack of basic access to cleaning supplies, toiletries, and masks threaten individuals’ safety. Medical attention is intermittent at best: Medical staff lack basic equipment to diagnose people, and in at least eight of these locales, individuals reported that medical staff avoided entering the sites altogether, preferring to give medical attention outside. Military personnel heavily guard the facilities.

Because there is no means to handle complaints, some people have resorted to social media to expose these conditions. Oblivious to the situation in shelters, the general population maintains its strong support of the government for taking early preventive measures. Fearing the growing number of positive cases in shelters, some have also responded to these complaints by circulating stigmatizing comments and even cartoons, blaming people in shelters for returning home while denigrating them for being potential vectors of transmission.

I was among the 246 individuals placed in quarantine in Ciudad del Este. Beginning March 28, I spent 17 days at a modified retreat center, where we slept in close quarters in groups of up to 60. We suffered a lack of access to medical attention, and by the second week we were fighting with the military overseers for access to water, toilet paper, and basic cleaning supplies. Our complaints went unheard. Meanwhile, the media criticized us for denouncing our conditions, frequently reiterating support for the Ministry of Health. Little did we know at the time that the groups arriving at the border after us would be housed under even harsher conditions.

Since my release, I have managed a support network for individuals in similar situations by following the conditions they face and advocating for their rights. I met Nelson on the phone as he was en route to a warehouse, where a group of 140 would sleep on improvised beds and share four indoor toilets and two showers.

Following the Ministry of Health’s initial recommendation, individuals were tested for Covid-19 only on day 14 of quarantine. This measure prevented early detection of positive cases, potentially converting these shelters into viral breeding grounds, as one of Paraguay’s few renowned and outspoken physicians warned.

In Nelson’s group, 90 tested positive by the end of their stay, and following protocol, the entire positive cohort was to be tested again in 7 days. Any positive cases would remain until they all test negative—a process that implies an indeterminate amount of time. Like Nelson, most of us are baffled that test results are rarely formally delivered.

This is a recurring grievance. Andrea, a 20-year-old in another shelter, shared with me: “The doctors don’t explain anything. One night they came and told us that a group of us were negative and that we would be taken to another shelter. They didn’t even tell us where, nor if anyone else was sick.” In desperation, Andrea, who had tested negative, refused to leave the shelter, staying with her underage sister, who, she said with her voice cracking, she would not leave “under any circumstance.”

Gabriel worked intermittently with a group of Paraguayans in a sweatshop in São Paulo, Brazil. When his shop shifted to producing masks —a job that pays less— he was unable to sustain himself and decided to return to his home in rural Paraguay. His experience in a shelter turned into a nightmare. In his group, 16 of 45 individuals tested positive. One of his friends had to wait five days to receive medical attention after repeatedly confronting the nurse about his symptoms.

This reality is more poignant in the case of pregnant women and children. Luisa, a mother of two who tested positive, related through sobs that her hungry kids were only drinking milk because her shelter served lunch late at 3 PM. Such stressors compound pressing health concerns. Not all groups receive psychological support, and a case has already been reported of a man trying to kill himself and another person who temporarily escaped a shelter. These events are collective evidence of the drama in these shelters—places that have become, à la Agamben, sites of exception where bodies become expendable as their rights are temporarily suspended.

The escalating number of complaints circulated through social media and news outlets prompted a statement from the national group coordinating the shelters. In their May 1 press release, the government officials described the situation as optimal and the measures taken by the government as successful. The Minister of Consular Affairs, a spokesperson for the shelters, reiterated this position, stressing that the shelters follow public health protocols. While this is indeed true for a small number of shelters, the government has denied the many grievances at other locations.

Recently, President Mario Abdo Benítez remarked that people are becoming infected in shelters partly because of mate and tereré—cultural drinks traditionally shared among several individuals. This discourse absolves the state’s inefficiency and places the blame on the victims. The rapidly escalating numbers of people infected in shelters, however, are telling: At the end of April there were no more than 17 reported infected individuals in shelters, but the number increased to 126 as of May 10, according to Ministry of Health data.

The Paraguayan NGO Coordinadora de Derechos Humanos del Paraguay has condemned the situation at Friendship Bridge, but more remains to be done. The conditions in shelters remain dire, with 3,500 individuals still waiting to enter the country as of May 13. While the MSPBS denies reports of overcrowded shelters, delays in issuing test results, and failures to promptly separate new positive cases in shelters, there is a hint that authorities are heeding calls to remedy their missteps. Recent protocol changes now allow people to be tested upon entering a shelter to immediately isolate positive cases, and on May 13, a plan was approved to outfit 11 “Health Hotels” for individual isolation. The government has recommended that the hotels apply “social tariffs,” though each hotel will determine the price. Ultimately, only those who have the means to cover these costs will be accommodated—an impossibility for most returnees.

Nelson, Andrea, Luisa, and Gabriel were willing to comply with the obligation to undergo a preventive quarantine as they return home. They have the right, however —just like any other Paraguayan— to complete this process in a safe and dignified way. It is up to the Paraguayan state to safeguard the rights of all its citizens during the pandemic that is now hitting home.

Paola Canova is an assistant professor of Anthropology at the University of Texas, Austin. She underwent preventive quarantine in a government-run shelter and since then has been articulating a network of returnees undergoing the same process, to help denounce abuses.