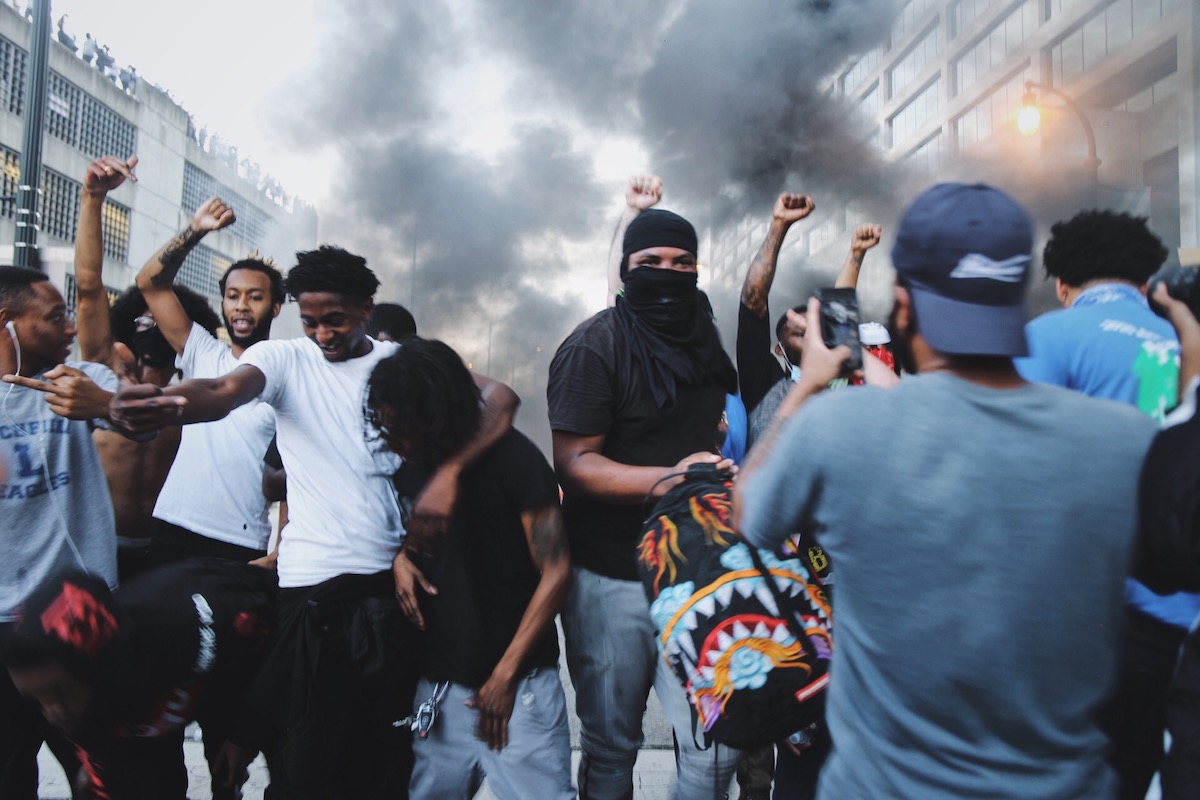 Protesters in Atlanta, Georgia, May 29, 2020 (Photo by Julieta Martinelli/Latino USA)

ATLANTA — On Friday May 29, hundreds of protestors gathered in Georgia’s capital in a call to end police brutality after the death of George Floyd last Monday in Minneapolis, Minnesota.

With protests and demonstrations happening all over the country and in other parts of the world, Friday’s Atlanta protest was spurned by Floyd’s death, but was also a demand for change against what protestors called a system of oppression that has historically devalued Black lives—a system they say has allowed police to use excessive force, and even kill Black citizens without repercussions.

Last year, the Georgia Bureau of Investigation was called to investigate 84 shootings involving police across the state. Advocates say at least six Black men have been fatally shot in Atlanta by police officers None of the officers involved in these shootings have faced any charges.

The flyer circulating throughout social media about the Atlanta protest promoted a peaceful march for others besides Floyd who have died at the hands of police in 2020. These lost lives included Breonna Taylor, who was killed by a Louisville police officer in her home, and Ahmaud Arbery, murdered while jogging in southern Georgia just three months ago. Arbery’s case made national headlines after prosecutors initially refused to charge the shooters, a former police officer and his son.

For many in the Atlanta area, the death of Arbery hit close to home—just another reminder of a legacy of racism in the South that still has roots in slavery despite the city’s progressive reputation.

The Friday protest began in the afternoon at Centennial Olympic Park, a meet-up point for many of the protests I’ve covered in Atlanta over the years. Protesters were planning to march to the state capitol, about a mile away, and then back to the park.

By 5 p.m., hundreds of people (largely a mixed crowd of Black, white, and some Latinx protestors) were barricaded in front of the nearby CNN headquarters —just up the street from the park— by a barrier of Atlanta police officers and military vehicles.

For several hours, protesters chanted and held up signs. They were stuck and had nowhere to go. Organizers, some with megaphones, called for white allies to head to the front line.

“They won’t hurt you,” they called out.

On the front lines, some protesters pleaded with officers of Atlanta’s largely Black police force. Some yelled out that they were standing on the wrong side. In the street, others took a knee and put their hands up, chanting ,“Hands up, don’t shoot.” As time progressed, some in the crowd began to get more restless. Others tagged the CNN sign with sharpies, messages included “ACAB” (All Cops Are Bad) and “No justice, no peace.” Many of the initial messages were written by white protestors.

Eventually a young man scaled the sign and stood over the crowd. He was handed what looked like a black cloth. When he unfurled it, the multitude erupted in cheers, as others drummed on the metal sign. The man waved a flag that read “Black Lives Matter.”

Shortly after, he was joined on top of the sign by a young man holding a Mexican flag. The crowd applauded as both flags were flown side by side. It was the most joyous moment I’d witness all evening. A show of solidarity between Black and Latinx communities, who mostly live side by side in the Atlanta area. And who face similar issues of over policing and rough treatment in surrounding counties like Gwinnett and Cobb—places that have made national news due to the sheer amount of people being deported in cooperation with ICE for minor offenses like traffic violations.

Tensions escalated when people began yelling that police were trying to scale the sign. In the scuffle that ensued, someone broke a glass pane leading to the CNN Center. Police lined up in front of the building, some with zip ties on their belts. People in front of the crowd began yelling, “They want to arrest us.”

As police officers pushed protestors away from the building, some of the protesters began to throw water bottles, and later rocks that they picked up in the street. Officers dodged and caught water bottles with their hands. For the most part, it was the glass panes of the CNN building that people seemed to be aiming the rocks at, as evidenced by the damage on what would be the second floor.

A protestor near me in the crowd yelled, “You care more about these buildings than our lives.”

The crowd around him cheered.

As police began to push protesters back towards the park, they linked arms and stood ground. From the back and sides, officers marched forward, pushing protesters and releasing tear gas. It was chaotic. Around me, several physical scuffles between protesters and police ensued. I witnessed an officer being pulled back by the crowd as he held on to a protester’s collar and tried to punch him. It’s unclear how the fight started. Around the same time, on the news, Atlanta’s mayor was saying that officers’ goal was to avoid violence.

Panic set in shortly after. With crowds running and screaming and plumes of pink gas enveloping the air.

Someone jumped on a police car. A white protester began bashing the car’s windows in with a skateboard. Others joined in, first taking air out of the tires and then breaking more windows. Others began jumping from car to car.

A police cruiser was then set on fire by burning papers from a citation clipboard found inside the car. Police retreated. For almost 30 minutes, the cruiser burned, no fire trucks in sight. People stood by the vehicle. Some posed in front of it. Others yelled out warnings: “Please don’t get too close. It’s dangerous. The car will explode.” After several small explosions that shook the crowd, police eventually arrived with several firefighters who put out the flames from a distance.

Police continued deploying gas and pushing away protesters with batons. Eventually, police were able to completely clear the street in front of CNN. The remaining protestors now stood at an intersection, face to face with a wall of officers.

Some of the protesters tried to dialogue with the police. Many focused on the Black officers, asking them not to participate in a system that has been used to harm other Black people. Some spoke quietly, some yelled in frustration. On a loudspeaker, an officer began to issue warnings: “This is an unlawful assembly. We will use tear gas.”

An hour later, when it got dark, a final warning was issued. Protestors called amongst themselves to join hands, to hold their ground, to stay still. They chanted, “No justice, no peace” and “I can’t breathe.”

And then, tear gas.

It came from all sides. Canisters falling all around us—protesters and press alike. People began to panic, trying to run away from the smoke but the adjacent streets were blocked by police throwing more tear gas. Something was sprayed in my face. I couldn’t see or breathe. I stumbled into the park. Eventually, I fell into a corner of the lawn. A protestor saw me and poured milk on my eyes and clothes. He left the bottle with me and kept running.

After, these men told me they’d been gassed as well but returned to hold their ground.

This photo shows about the size of the crowd in front of police when they were tear gassed. The front line of officers used batons to push protestors back into the panic.

On the other side of the park, a fire raged—three patrol vehicles on fire. I was there recording when police arrived in riot gear. I yelled out that I was press twice. An officer flashed a laser light in my eyes as I spoke into my recorder describing what was happening around me. Eventually, a fire truck arrived. By then, most people were watching the burning vehicles from across a cement fence in the park.

And then, more tear gas.

Around 11 p.m. that night, a separate group broke into Lenox Mall—an upscale, luxury mall in Buckhead. News video showed people walking out with jewelry and iPhones.

Protests continued until late into the night, but I retreated after the second tear gas incident with chest pain. Local newscasts that night characterized the events of the day as a riot, a violent protest that continued to escalate. Playing back images of protestors setting patrol cars on fire, throwing bottles and busting windows of several chain stores. Those things happened, no doubt. But it’s important to be just as clear that the majority of people who were present at Friday’s protest were not participating in violence against police or committing any acts of vandalism.

It’s an important distinction to make, as images of protests from around the country make news and become part of the national conversation—and the focus shifts from the reason they started (the death of George Floyd) to the different ways in which people protest for change.

In Atlanta, protests organized a peaceful march. Police chose to block off their path with humvees, to launch bean bags, to deploy officers with gas masks, batons and riot gear. To use tear gas at large instead of focusing on disruptors, when most of the crowd was not engaged in destructive actions. At a time when people around the nation are so frustrated with use of force by police, Atlanta had an opportunity to deescalate—instead many of the actions I witnessed on the first day of protests fanned the flames when tensions were already high on both sides.

Over the weekend, Governor Brian Kemp issued a state of emergency in Fulton County and authorized the deployment of up to 3,000 National Guard troops. On Saturday, Atlanta Mayor Keisha Bottoms signed an executive order setting a 9 p.m. curfew—that was extended Sunday and once again on Monday as protests continued. Almost 300 people have been arrested so far and two police officers were fired after they were recorded on live TV using excessive force on two young protesters.

Tensions are still high in Atlanta, but maybe some of those tensions could have been avoided.