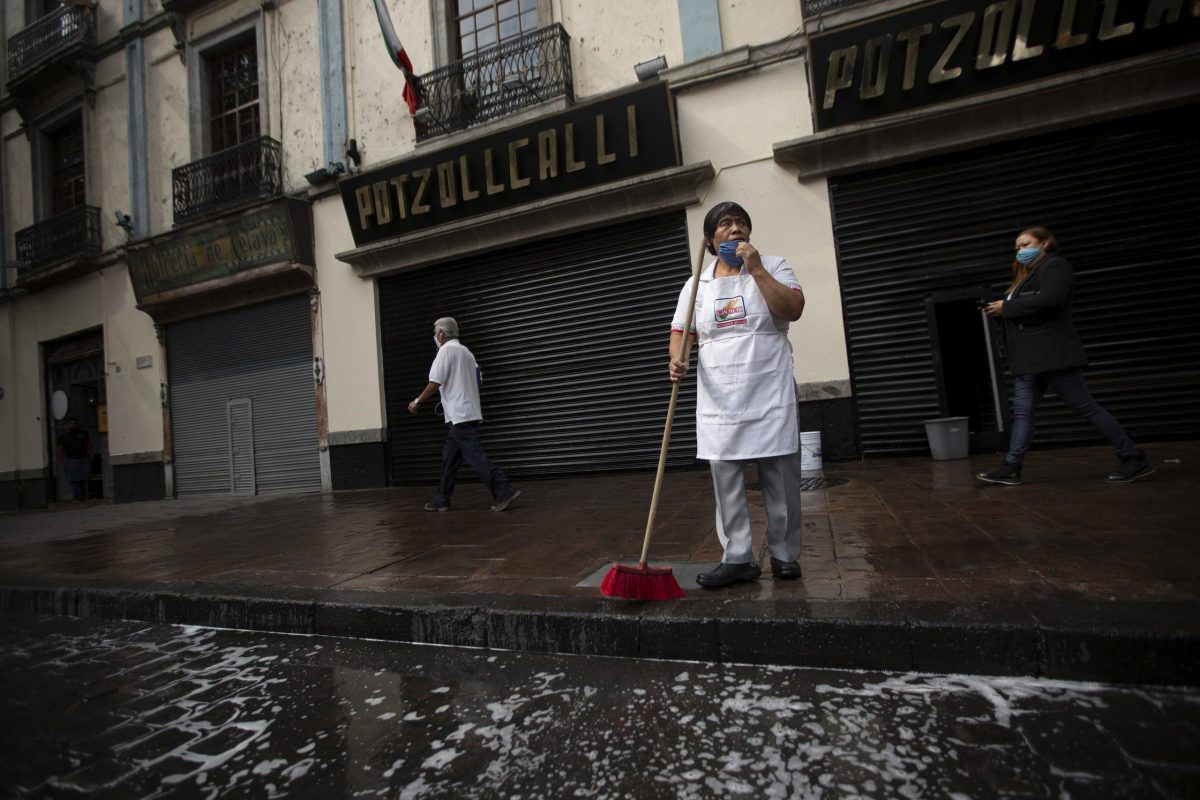 A restaurant worker cleans the sidewalk before opening for take-out ordres only, in Mexico City, Monday, June 1, 2020. (AP Photo/Fernando Llano)

CANCUN, Mexico (AP) — Amid a pandemic and a brewing tropical storm, Mexico President Andrés Manuel López Obrador kicked off Mexico’s return to a “new normal” Monday with his first road trip in two months as the nation began to gradually ease some virus-inspired restrictions.

López Obrador said he’s taking all necessary precautions —he drove the 1,000 miles from Mexico City over the weekend rather than flying— on a trip to promote the construction of one of his signature infrastructure projects the Mayan Train.

While the federal government’s nationwide social distancing rule formally ended Monday, it is urging people in so-called “red” zones to maintain most of those measures—and so many people are falling ill and dying each day that those zones cover nearly the whole country.

Mexico is nearing 100,000 confirmed infections and has topped 10,000 deaths, but those official tallies are considered to be undercounts.

Mexican officials said last week that more than 5,000 companies had implemented protocols that would allow them to reopen this week. The federal government had cleared businesses in the mining, construction and auto manufacturing sectors to resume operations.

While in Cancun, the president was also talking up what local officials hope is the quick return of tourists. Mexico’s most popular beach destination officially plans to reopen next week—albeit with social distancing restrictions such as a ban on buffets. Quintana Roo Gov. Carlos Manuel Joaquín Gonzalez said they’ve already started receiving reservations.

But around Cancun, nothing appeared normal yet. The beaches were empty, bars and restaurants remained closed. Locals walked around wearing masks and traffic was light. The dramatic drop of international air travel and April 1 closure of Cancun’s beaches left thousands unemployed.

Cancun resident Andrés Jose Conrado said maybe his city could reopen in a few months, but it was more important to continue with the health precautions.

“I say it’s very early (to reopen),” Conrado said, a cloth mask over his nose and mouth. “For now I say it’s not necessary.”

But Sergio Ortega Jara, another resident who is out of work, said they need to get jobs back. He conceded that the virus was a real danger, but insisted people need income. “It’s kind of bad, there’s no work,” Ortega said.

In Mexico City, traffic has increased significantly in the past week. In some neighborhoods, foot traffic had hardly ever diminished. Mexico City Mayor Claudia Sheinbaum urged residents via Twitter on Monday to stay at home if it wasn’t absolutely necessary to go out.

Still, public spaces vacant of people during the past two months were bustling on Monday. There were protests by police and unemployed musicians in the principal plaza. People strolled in the historic center and along a main boulevard. Cleaning seemed to be happening everywhere as still-closed offices and restaurants prepared to open.

A long line of people seeking construction permits stretched in front of a city office building. While the city has had some success imposing orderly lines at its subway stations, a commuter bus line station was chaos. Most people at least were wearing masks.

Renato Rivera stood outside a construction site wearing a red mask Monday. He had heard they were getting back to work, but when he arrived there wasn’t a job for him.

“It’s not that you’re not scared,” he said of returning to work. “We’re all scared. But we have need. There’s no help from the government.”

On Monday, López Obrador highlighted a couple of hot spots, including the Pacific Coast beach destination Acapulco and his home state of Tabasco.

“We’re going to carefully return to productive activities,” he said.

Later in the day during a visit to a military base on Isla Mujeres, López Obrador warned that if there were new outbreaks and a surge in infections, restrictions would be tightened again.

For the most part Mexico’s restrictions have been recommendations. López Obrador repeated Monday that he preferred reasoning with people to “authoritarian impositions.”

The Pacific resorts of Los Cabos had initially set June 1 to reopen, but have now pushed that deeper into the month.

López Obrador planned to spend the week promoting the start of construction for the Mayan Train, which will whisk tourists from resort destinations like Cancun into the interior of the Yucatan Peninsula. It has been criticized as an environmental threat and faces opposition from indigenous communities, but he says it will create 80,000 jobs.

The president has faced criticism for his handling of the pandemic. He continued to travel the country a month after Mexico’s first confirmed case and has continually mixed messages of a need to take precautions with the country’s need to reactivate its economy.

The Mexican government has estimated about 1 million jobs have been lost during the epidemic. Mexico’s central bank projected last week that the economy would shrink as much as 8.8% this year.

On his way to Cancun, López Obrador stopped at his ranch in Chiapas state and recorded a video he shared on social networks. He tried to highlight positive economic signs, noting the peso has regained a bit of value against the dollar and the price of oil has risen slightly.

“I wanted to give you good news,” López Obrador said. “There is economic recovery. The model we are using is showing us results.”

The remnants of Tropical Storm Amanda which left at least 17 dead over the weekend in Central America reformed into a tropical depression in the Bay of Campeche and was forecast to become a tropical storm. It was expected to dump 10 to 15 inches of rain on the Yucatan Peninsula and gulf coast states in coming days.