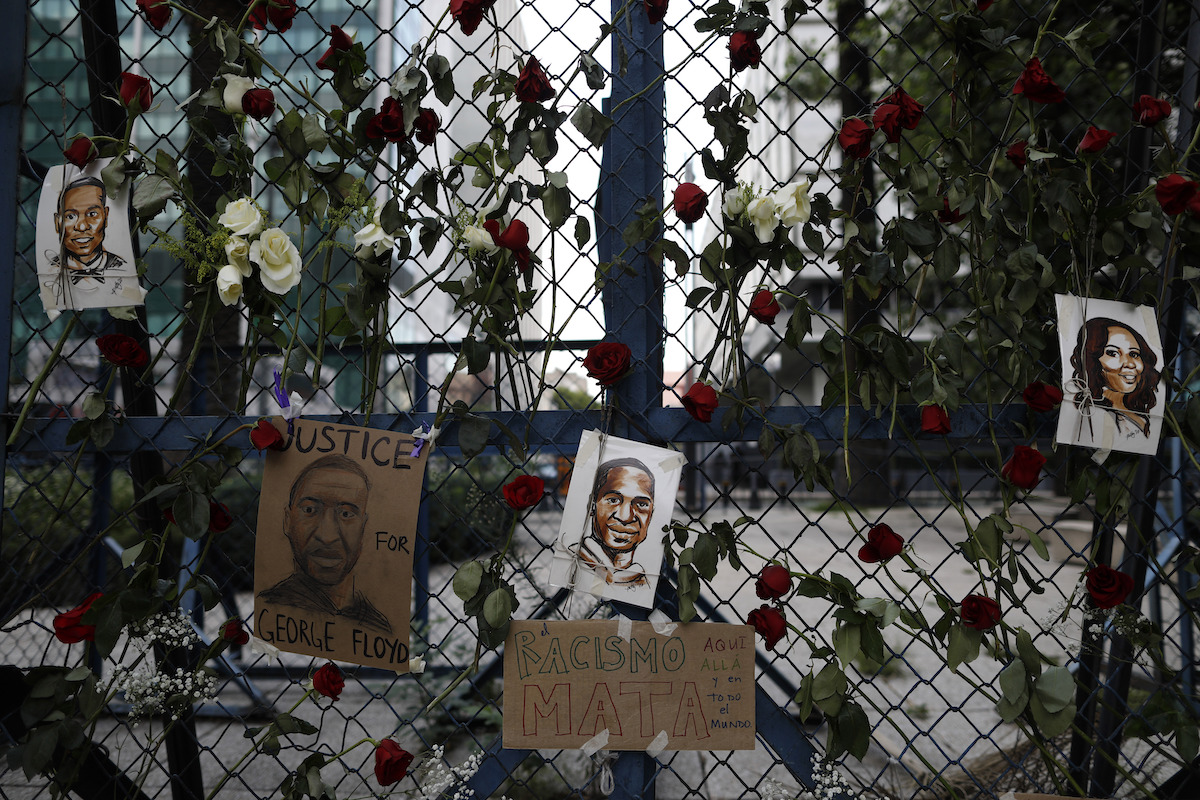 Images of George Floyd and other African Americans killed by police hang surrounded by roses on a security barrier outside the U.S. embassy in Mexico City, Saturday, May 30, 2020. (AP Photo/Rebecca Blackwell)

MEXICO CITY (AP) — As protests rock the United States over allegations of police abuses, anger built in Mexico on Thursday over its own police brutality case: a young man allegedly beaten to death after officers detained him for not wearing a face mask during the coronavirus pandemic.

Hundreds of protesters marched Thursday evening in Guadalajara, the capital of Jalisco state, to demand justice in the death of Giovanni López. Some broke into the state Capitol and sprayed graffiti on the walls while others later set two police patrol vehicles on fire.

An online campaign already in progress calling for justice in López’s death has drawn support from stars like Oscar-winning director Guillermo del Toro.

Authorities in Jalisco have said that López was detained May 4 in a town near Guadalajara for a misdemeanor equivalent to disturbing the peace or resisting arrest.

Riots have broken out in Guadalajara, Mexico after 30-year-old Giovanni Lopez was murdered in police custody. He had been violently arrested for not wearing a face mask.

The struggle against police brutality is a global struggle. #JusticiaParaGiovannipic.twitter.com/uKWfxbYZW4

A video of his detention shows municipal police wrestling him into a patrol truck as residents argued with officers about excessive use of force and rules requiring face masks, a measure designed to slow the spread of the coronavirus. Hours later he was taken from his cell for medical treatment and died.

None of the municipal police in the town of Ixtlahuacán de los Membrillos have been arrested, fired or charged in the death, which officials have said was the result of beatings.

Jalisco state prosecutor Gerardo Solis said Thursday that the police officers had been placed under investigation.

State Gov. Enrique Alfaro called the López’s death “an atrocity” Thursday and promised results from the investigation “within hours.”

But the governor also said the incident was “an act of the municipal authorities” and the state wasn’t to blame. “I am also hurt, I am also indignant, I am also enraged that these happen in Mexico,” Alfaro wrote.

But the federal Interior Department said in a statement that the tough anti-pandemic measures implemented by Alfaro in Jalisco, including detaining people for violating curfews or not wearing masks, contributed to the problem.

“This event came in the context of the restrictive measures implemented by the governor of Jalisco to fight the pandemic, which included the use of law enforcement forces, and which led to abuses by authorities,” the department said.

Assistant Interior Secretary Alejandro Encinas wrote that he “condemns acts in which law enforcement has been used to enforce preventative measures against the pandemic, or the arbitrary arrest of people, particularly the most vulnerable among us.”

There have been disputes before about pandemic prevention measures in Mexico, where some towns put up roadblocks or checkpoints to seal themselves off from the outside world, required visitors to isolate or enforced curfews.

Jesús Peña, of the office of the U.N. High Commissioner on Human Rights in Mexico, said that “we encourage the authorities of Jalisco state to send a clear and unequivocal message that human rights violations will not be tolerated in the enforcement of emergency measures during the COVID-19 pandemic.”

Police brutality has a long history in Mexico that predates the coronavirus pandemic. Police and military personnel have very seldom been punished for excessive use of force or extrajudicial killings.