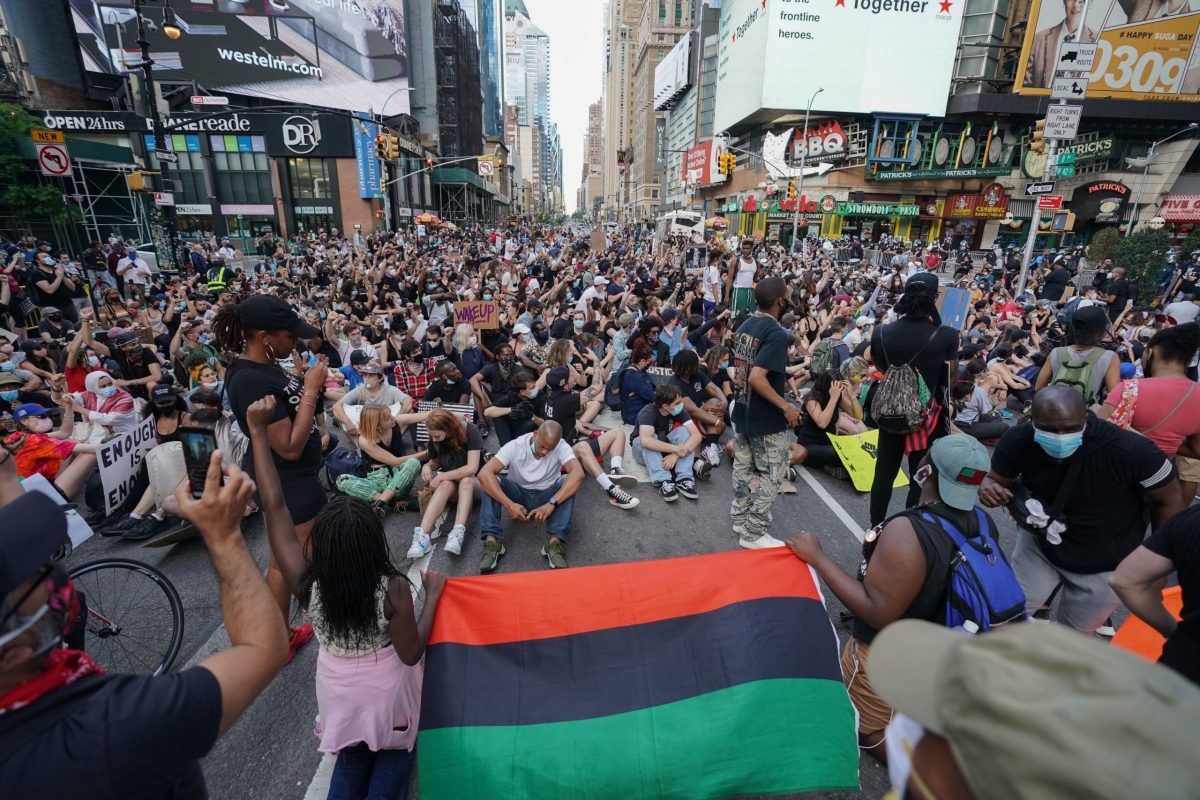 Protesters sit in the middle of the intersection of 42nd Street near Times Square as they demonstrate over the death of George Floyd in police custody, on June 7, 2020 in New York. (Photo by Bryan R. Smith / AFP) (Photo by BRYAN R. SMITH/AFP via Getty Images)

On July 3, 1992, José “Kiko” García, 22, was shot and killed by New York police officer Michael O’Keefe. The NYPD alleged that after a struggle and the discovery that García carried a loaded gun, O’Keefe shot him in self-defense. Many in García’s family and community denied these claims, claiming that O’Keefe had assaulted García prior to the shooting.

For days after García’s death, New Yorkers marched through the streets of Washington Heights. I learned of these protests after my father emailed my sister and I, a video of the marches. My father’s message arrived during a global pandemic and nationwide protests demanding justice for George Floyd, Breonna Taylor, and other Black lives lost to police brutality and armed white vigilantes.

The 1992 protests showed a community traumatized but using their pain, tears, and anger to demand justice. My father, who along with my mother arrived in the United States just a few years after García, vividly remembers those days. It is not a coincidence that they’re both reflecting on that time now, when people in the U.S. are protesting police brutality.

“In 1992, a young Dominican was executed by an NYPD. cop. Washington Heights was like a war zone. I still remember,” he told me. “Later that year [in September of 1992] that cop was exonerated of all charges.”

I spent days after reading about García and those who loved him. He was undocumented and arrived from San Francisco de Macorís, Dominican Republic in 1988. He was known as “Kiko” to those closest to him. He sold clothes for a living and shared an apartment with his siblings and mother. It was she who he called out for, witnesses alleged, before O’Keefe shot him: “Mamá, mamá, me están matando” (Mom, mom, they’re killing me)—a lamentation like the final words of 46-year-old Floyd as he was killed by a Minneapolis police officer.

My father remembers the anger and fear that fueled the 1992 marches. Many of these immigrants left the poverty, violence, and oppression of our motherland only to be confronted by systemic racism and oppression in the U.S. The American Dream, we learned, was merely another name for a white supremacist nation built not on freedom and justice, but on the exploitation and oppression of Black Americans.

Colorism, a prejudice born from colonialism and perfected by dictator Rafael Trujillo, is so entwined with our identity that many Dominicans arrive to the U.S. unwilling to acknowledge our shared history in the diaspora,—choosing instead to view ourselves as superior to Black Americans. As protests around the nation continue to grow, I see more and more anti-Black sentiments among Dominicans, both within my family and on social media, including a viral video of a Dominican man using racial slurs against Black Americans and demanding that Dominicans reject the Black label in order to “put our people first.”

Last week the word “Dominicans” was trending on social media after an action galvanizing Washington Heights residents to “protect” local business from who they called “looters” turned into what appeared to be a group of men chasing young Black Americans out of the neighborhood. Since then, video has been uploaded of the organizers of that protest hand-in-hand with those same youth, saying it was a misunderstanding by those who saw the video and that “homies who were involved in the situation came back to my side and we made it right.” Many, nonetheless, expressed concern about the incidents of that evening.

I want to start off by saying what took place other day was something totally uncalled for . The internet was so quick to make it something it was not . I provided my platform for the cause of good anything opposite of that i don’t condone !!! For all my black brothers who know me and know how i move especially when ya come to my side ya know the love ya get out here . Glad to see how everyone came together and politic on the situation💯 homies who were involved in the situation came back to my side and we made it right !!!! Much love and respect to them for that !!!WE ARE ALL ONE !!! It’s us vs them #stoppolicebrutality #BLM @dyckmandiary PASS THIS AROUND

How Dominicans Can Contribute To #BlackLivesMatter

As the zeitgeist returns to colorism in the Dominican community, and as many of us —including those of us who identify as Afro-Dominicans— discuss blackness with relatives, how do we acknowledge this shared history without erasing the violence, terror, and brutality Black Americans have endured since they built America? By engaging more critically with our history, the story of García and our movements of resistance, how can we effectively contribute to the movement for Black liberation?

First, it is important that we acknowledge how our Dominican identity has been shaped, from the motherland to Manhattan—by violence and trauma from the effects of Spanish colonialism on our original Taíno inhabitants to the arrival of enslaved Africans to our complicated, violent and racist history with Haiti. We must sit with this history and understand how it shapes both our personal and collective Dominican identities while also remembering that our families and histories have not been shaped by U.S. slavery and its aftermath like Black Americans. The 1992 protests are also a part of a rich history of Dominican resistance, from the early revolts against Spanish rule to revolutionaries who publicly criticized the Trujillato (that is, the Trujillo dictatorship). These examples are especially important for young members of our community looking to stand in solidarity with Black Americans across the nation.

Second, along with learning our history, we can educate ourselves by reading the works of individuals who are talking about Dominican identity. Examples include José Luis Vilson, Zahira Kelly-Cabrera, Sandra E. García, Marjua Estevez and Latino USA’s own Amanda Alcántara (whose thread on anti-Blackness inspired this piece.) These are thinkers who have helped me to think more deeply about what it means for me to identify and write as an Afro-Dominicana, from challenging my own light-skinned privilege to learning about anti-Blackness in education and the music industry to centering Dominican stories. In the same way that we are demanding that white Americans have difficult conversations about race, by sitting with the work of these thinkers, we can learn to challenge the anti-Blackness in our own families. It is okay to feel uncomfortable. That is part of the process.

Remember not to chalk it all up to just Trujillo. US imperialism like the first military occupation & pressure to “separate from Haiti” from previous century contributed to antiblackness & antihaitianism for years before Trujillo ever became president.

Third, learn from and support the work of Black thinkers. Consider subscribing and supporting shows like “Tea with Queen & J,” a womanist podcast focused on pop culture and Black liberation, and “Strange Fruit, a podcast about pop culture and Black gay life. Book titles to consider include As Black as Resistance: Finding the Conditions for Liberation by Zoé Samudzi and William C. Anderson; From #BlackLivesMatter to Black Liberation by Keeanga-Yamahtta Taylor; and A Book About Things I Will Tell My Daughter by Joel L. Daniels.

Fourth, organizers are urging people to support and/or get involved with organizations and activists involved in the fight for Black liberation across the country. These include those helping Black transgender people like the Black Trans Travel Fund, the Okra Project, and For the Gworls; local Black Lives Matter chapters; and Equality for Flatbush, “a Black-led grassroots org dedicated to fighting the police and gentrification.”

This weekend, many Dominicans on my Instagram and Twitter feeds shared tips on how to talk about anti-Blackness with family. Some posted links to organizations they were supporting, including receipt screenshots of their donations. Others shared pictures of themselves marching. Many uplifted and centered Black abolitionist policies —e.g., #8toAbolition— and the works of Black activists, including Zakiyah Ansari, Darnell Moore, and Clarissa Brooks.

A crowd of about a hundred Dominicans also gathered in Washington Heights for a #BlackLivesMatter protest—the images from that protest have been circulating all over social media this weekend and Monday.

These for me hit close to home that’s because it was in my home of Washington Heights. This series was from a protest fighting anti-blackness in the Latin American community and especially the Dominican community. We all know too well the concept of “Pelo Bueno- Pelo Malo// Good Hair/ Bad Hair” that in Latin America people of lighter shades are predetermined to do better in society because of the color of their skin. I’ve had my own experiences both for my favor and against where in The Dominican Republic I am favored because of my lighter skin, however in the U.S Its been mixed more negative – more on that some other time. This was a protest identifying and honoring our African Roots and fighting along side our black brothers and sisters in this climate and that we too have fallen victim to police brutality.

What I like .What I love !NOPE not going back and forth with that other bullshit because that’s not what I believe and stand for.UNITY is what I stand for and it’s what I’m about.

#repost @led_black ・・・ Uptown Stand Up! 06/06/20: Black Lives Matter Protest Uptown Pics: @eabreuvisuals Words: @led_black The protest was postponed but it still happened. All of the different organizations that were involved in organizing the protest, the Uptown Collective included, decided collectively, for various reasons, to postpone the march. But the people came out anyway so the manifestation happened organically. Hundreds gathered at Mitchel Square and marched from there to Dyckman and Post Ave. As we were leaving Mitchel Square, the skies opened up and let loose a torrential downpour that felt almost biblical in its intensity. But that did not stop us. We were on a mission. Along the way the march gathered steam and more marchers. I could not be prouder of my community for coming out and showing the world how Uptown does it. Irrespective of how this entire community was maligned earlier this week we will persevere and not allow ourselves to be divided. Black Lives Matter. Period. Remember y'all, Spread Love It's The Uptown Way. www.UptownCollective.com #BLM #BlackLivesMatter #LasVidasNegraImportan

As corporations, publications, and celebrities look to dilute the messages of this movement, we must continue to amplify that Black Lives Matter to us. We must continue to support the fight for Black liberation in re-imagining a world free of “the systemic racism that allows this culture of corruption to go unchecked and our lives to be taken”—a liberated world for Black Americans and all people of the diaspora.