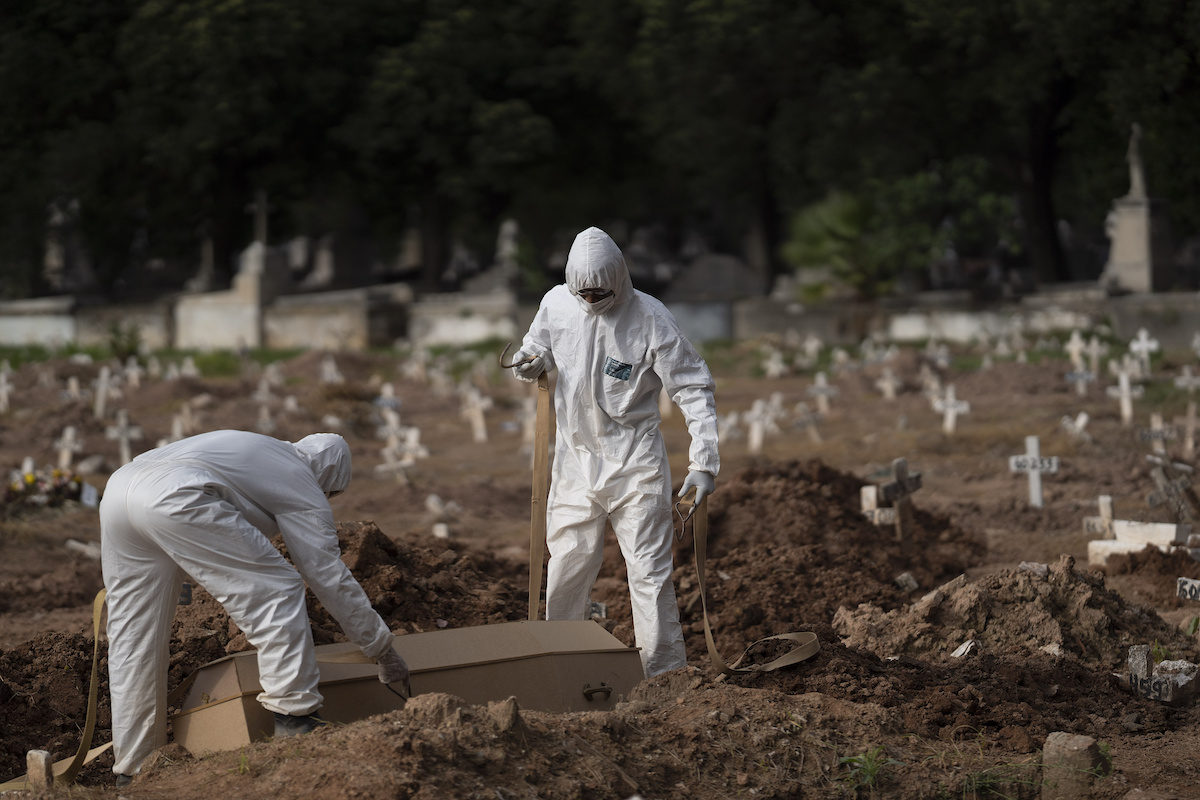 RIO DE JANEIRO (AP) — As the coronavirus claims tens of thousands of lives in Brazil, President Jair Bolsonaro is focused on ensuring his political survival and mobilizing his far-right supporters to do so.

With less than one-third of Brazilians approving Bolsonaro’s handling of the pandemic, and protests against him increasing, analysts say he’s shoring up his base to shield himself from possible impeachment and improve governability.

“He’s losing support and needs something to put in its place,” Maurício Santoro, a professor of political science at the State University of Rio de Janeiro. “Bolsonaro needs people on the street defending him.”

Casting doubt on COVID-19 statistics has been a mainstay in far-right circles and Bolsonaro has amplified that claim. So far COVID-19 has killed more than 36,000 Brazilians, but one wouldn’t know it from the Health Ministry’s website; it stopped publishing cumulative totals on Friday, the day after Brazil surpassed Italy to become third worldwide.

After backlash, a top Health Ministry official told reporters Monday night that the body would restore the cumulative death toll to its website, as early as Tuesday, but with changes to the methodology for how daily deaths are tallied.

Critics complained that the extraordinary move to squelch the death toll resembled tactics used by authoritarian regimes. It came after months of Bolsonaro downplaying COVID-19 and maintaining that economic meltdown would inflict worse hardship than allowing the virus to run its course.

Pollster Datafolha found that roughly 30% of Brazilians surveyed May 25-26 rated Bolsonaro as good or excellent and also approved of his handling of the pandemic.

Bolsonaro foes, seeing weakness, have submitted more than 30 requests for impeachment to Congress, where so far they’ve been stalled by the lower house speaker. The president’s allies hope energized supporters could make it costly to support such moves.

The muted support for Bolsonaro was on display the past weekend, with protests against Bolsonaro’s government held in 20 cities while pro-government demonstrations were significantly smaller than prior weekends.

Bolsonaro still enjoys considerable support on the far right. Backers in April were quick to join his call to defy social isolation recommendations even as the outbreak started exploding. Then they echoed the president’s call to treat COVID-19 with chloroquine, which many doctors refuse to prescribe for lack of evidence it can help and fear it may hurt some.

Olavo de Carvalho, an influential far-right ideologue, said May 12 the “supposedly deadly virus” was nothing more than a scare tactic to cow the population into slavery.

Bolsonaro has tried to energize his base by joining weekend rallies in the capital that feature banners denouncing the Supreme Court and Congress, sometimes in lurid terms, for undermining his administration. On May 31, he flew over the crowd in an Army helicopter and, after landing, rode into the plaza on horseback flanked by mounted military police.

On Friday, he pledged to make it easier for police officers and servicemen to import guns for personal use, part of the far-right’s longstanding demand to make guns more accessible.

“What’s making Bolsonaro get more radical is the pandemic; some processes that existed before were accelerated. And he is being seen as he is,” said Adriana Dias, a researcher on far-right groups at University of Campinas. She noted that Bolsonaro never demonstrates empathy about the virus, for example replying, “So what?” when asked about Brazil’s death toll surpassing China’s.

“That didn’t ring well with average Brazilians. That makes him even more dependent on the radicals,” she said.

A fissure emerged Saturday night, however. De Carvalho made an apparently rhetorical threat to topple the government. Once among Bolsonaro’s most strident supporters, he said repeatedly the president has only paid lip service to fighting political enemies without taking aggressive action — a sign of weakness that strengthens opponents and “invites humiliation.”

“There is still time for Bolsonaro to stop following bad advice and correct course of his policy. How much time? Five minutes,” Carvalho wrote on Facebook.

In an effort to bring de Carvalho back into the fold, close Bolsonaro ally Luciano Hang, who owns a chain of department stores, posted a 38-minute video to Facebook.

“I’m on your side and Brazilians need to be, too,” Hang said. “We need to be in the trenches fighting with you.”

Bolsonaro relies on such allies, as well as sons, ministers and advisors, to transmit signals that excite his base, according to Odilon Caldeira Neto, a history professor at the Federal University of Juiz de Fora who researches far-right ideology.

“The far-right embraces the idea of anti-democratic ruptures, and Bolsonaro is giving more space to those voices,” Caldeira said, particularly referring to showdowns with the Supreme Court and Congress, and alluding to the 1964-85 dictatorship that eventually closed Congress and sometimes overruled the Supreme Court.

Bolsonaro denounced a Supreme Court-ordered federal police raid on May 28 against prominent allies suspected of conspiring to circulate false and defamatory social media posts about his foes.

Also apparently angered by the raids was Eduardo Bolsonaro, the president’s son and a lawmaker, who once said it would be easy to shut down the Supreme Court. After the raid he said that there was no longer any doubt if Brazil’s government would suffer institutional rupture, “but rather when that will occur.”

Far-right activist Sara Giromini, also targeted by the investigation, on May 30 led a group of chanting protesters holding torches aloft to the Supreme Court; it was reminiscent of white nationalists’ Charlottesville march in 2017. She has organized a camp in Brasilia and acknowledged there were arms on the premises. Her group has sought to intimidate Bolsonaro’s political enemies, and public prosecutors have likened it to a paramilitary group.

“The radicals want Bolsonaro to stage a coup, but Brazil’s history doesn’t show presidents doing that without popular support,” said Carlos Melo, a political science professor at Insper in Sao Paulo. “The question will be if the military and the police that still support him will believe there are conditions to do this and regain popularity.”

Meantime, the COVID-19 death toll is a drag on approval, even if the narrative among Brazil’s far right is that it has been inflated as part of a conspiracy against Bolsonaro by the establishment, media and globalist organizations like the World Health Organization, according to Santoro, the professor in Rio.

“So, in a sense, the government decision to hide them [the numbers] is also in line with this ideology,” Santoro said.