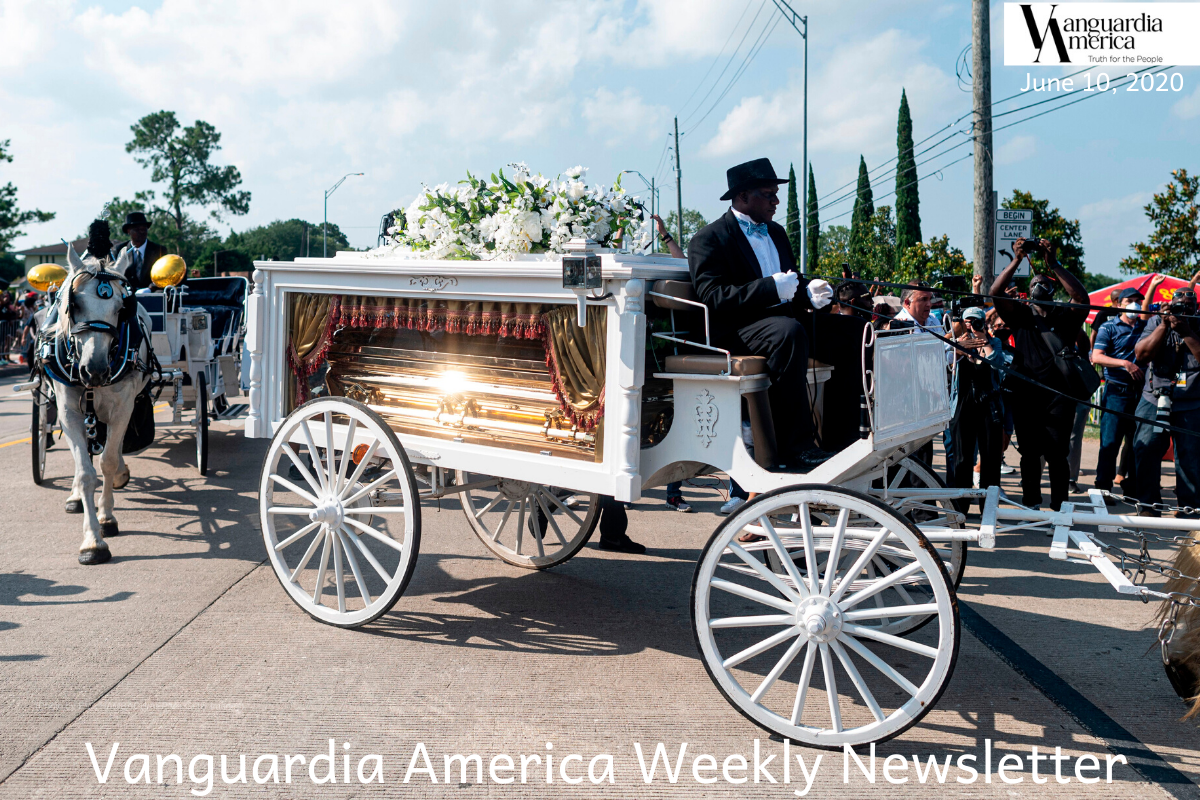 The casket of George Floyd is carried by a horse-drawn carriage to his final resting place at the Houston Memorial Gardens cemetery in Pearland, Texas on June 9, 2020. (Photo by JOHANNES EISELE/AFP via Getty Images)

George Floyd, known to his friends and family as “Big Floyd,” was laid to rest Tuesday alongside the grave of his mother.

Floyd’s alleged murder at the hands of four Minneapolis police officers May 25 was recorded on video by bystander’s cellphone. With his neck pinned to the pavement by the knee of Officer Derek Chauvin, Floyd cried out repeatedly, “I can’t breathe,” at one point directing his desperate pleas to his late mother, saying, “Mama, I’m through.”

Despite the COVID-19 crisis and appeals by health officials for people to socially distance, Floyd’s death inspired mass protests around the world and demands for an end to police brutality, especially against African American men, and what some have deemed a global pandemic of social injustice.

“Third Ward, Cuney Homes, that’s where he was born at. But everybody is going to remember him around the world. He is going to change the world,” Floyd’s brother, Rodney, told mourners during a final memorial service at Fountain of Praise church in Pearland, a Houston suburb.

Mass street protests demanding police reforms and social justice initiatives in the U.S. have spotlighted Latino solidarity in achieving those goals, as well as the complicity by some Latinos in perpetuating racist attitudes toward the African American community, which includes Afro-Latinos.

In a recent report by NBC Latino, the issue of “anti-Black racism” and “white presenting Latinos” is examined in-depth. Latino Rebels, meanwhile, has posted stories and op-eds on the subject, including reporting on criticism that coverage by the two largest Spanish-language news networks in the U.S., Telemundo and Univision, has been racially biased against African Americans.

In a wide-ranging feature posted June 3, Latino Rebels correspondent Ana Lucía Murillo wrote, “While some of their coverage has been thorough — Univision is maintaining a live blog with updates about the protests, and Telemundo has multiple stories on their site as of Wednesday afternoon related to excessive use of force by police during the protests, including a one-hour “I Can’t Breathe” special — some of their coverage is still prompting criticism of racism and anti-Blackness.”

Univision and Telemundo have issued statements to Latino Rebels vigorously affirming their commitment to provide accurate and unbiased reporting.

In a story for NBC Latino, reporter Nicole Acevedo notes that Jasmine Haywood of the Lumina Foundation, believes “anti-blackness sentiments are ‘ingrained in our cultures’ in part because generations of Latinos were ‘taught to seek partners that have a certain European or white phenotype or lighter skin to lighten their family trees.’ ”

The Miami Herald this week posted an op-ed by Somos for Black Lives, a coalition of Latino organizations, headlined, “Latinos must acknowledge our own racism, then we must pledge to fight it.”

On Tuesday, the national activist group Mijente launched an online petition drive demanding that Univision and Telemundo, “shift their news programming” about the Black Lives Matter movement, according to Latino Rebels.

University of Texas at San Antonio professor Rogelio Sáenz, in an article posted first by Latino Decisions, provides an extensive analysis on how “the COVID-19 virus has disproportionately hit Latinos and Blacks…”

Data gathered by the COVID Tracking Project, according to Sáenz, shows “that people of color have borne the brunt of the COVID-19 virus and the pandemic is nowhere over yet.  Things will only get worse in the near foreseeable future, intensified by states increasingly opening up for business and by the massive demonstrations resulting from [Minnesapolis Officer Derek Chauvin] savagely taking the life of George Floyd.”

Hispanic leaders in Congress say they are strongly supporting police reform efforts spearheaded by the Congressional Black Caucus in the wake of the killing of George Floyd at the hand of Minneapolis police.

“When it comes to legislation there’s no question the CBC [Congressional Black Caucus] is taking the lead on legislation at the federal level,” Rep. Tony Cárdenas (D-Calif.), the head of the Congressional Hispanic Caucus (CHC) campaign arm, Bold PAC, told The Hill.

The House Judiciary Committee hosted a hearing Wednesday on police brutality and the need for police and criminal justice reform. Earlier this week, House Democrats announced a comprehensive legislative package, the Justice in Policing Act of 2020, aimed at bringing about those reforms nationwide.

Floyd’s younger brother, Philonise Floyd, testified at the hearing, saying, “I couldn’t take care of George the day he was killed, but maybe by speaking with you today I can help make sure that his death isn’t in vain.”