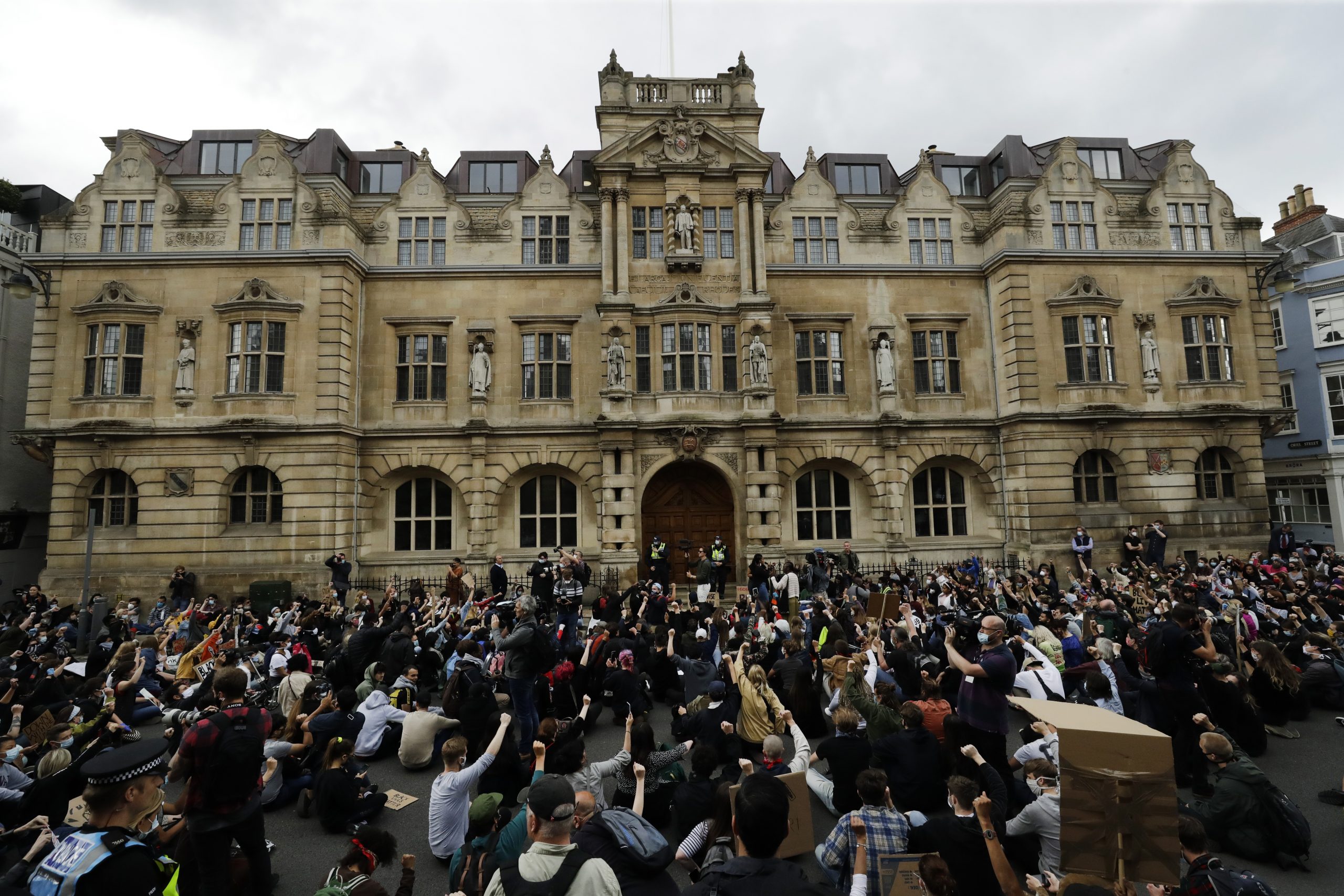 In this file photo dated Tuesday, June 9, 2020, supporters of the Rhodes Must Fall group, participate in a protest calling for the removal of a statue of Cecil Rhodes, a Victorian imperialist in southern Africa who made a fortune from mines and endowed the university's Rhodes scholarships, beneath the statue which stands on the facade, top centre, of Oriel College, in Oxford, England. (AP Photo/Matt Dunham, FILE)

LONDON (AP) — From Confederate monuments in the United States to statues of British slave traders, memorials erected in honor of historical figures have become a focus of protests around the world.

The death of George Floyd at the hands of Minneapolis police officers has sparked a reexamination of rigid injustices and inequalities underpinning many countries’ histories that often were exalted in stone or bronze.

A look at some contested monuments across Europe:

EDWARD COLSTON — The toppling of a statue of the 17th-century slave trader in the port city of Bristol on Sunday reignited debate in Britain about who deserves a permanent public memorial. Colston built a fortune transporting more than 80,000 enslaved Africans across the Atlantic Ocean before leaving his money to charity. His name adorns streets and buildings in Bristol, which was once the U.K.’s biggest port for slave ships. The statue has been pulled out of the harbor where protesters dumped it and will be placed in a museum.

CECIL RHODES — The Victorian imperialist served as prime minister of the Cape Colony in southern Africa and made a fortune from gold and diamond mines where miners labored in brutal conditions. He was an education benefactor whose legacy includes Oxford University’s Rhodes scholarships for international students. His statue was removed from the University of Cape Town in South Africa in 2015 after students led a “Rhodes Must Fall” campaign. A similar campaign is seeking to remove a statue of Rhodes from Oxford’s Oriel College.

HENRY DUNDAS — The late 18th-century Scottish politician was responsible for delaying Britain’s abolition of the slave trade by 15 years until 1807. During that time, more than half a million enslaved Africans were trafficked across the Atlantic. Campaigners want his statue removed from atop its column in Edinburgh’s St. Andrew Square. There are also calls to rename Dundas Street, a major thoroughfare in the Canadian city of Toronto.

ROBERT MILLIGAN — Authorities in London this week removed a statue of Milligan, an 18th-century merchant, who owned two sugar plantations in Jamaica with more than 500 slaves, from its perch in the city’s docklands.

ROBERT BADEN-POWELL — Officials plan to remove a statue of the founder of the Scouts movement from the quayside in Poole, southern England, out of concern it may be a target for protesters. Like many Englishmen of his time, Baden-Powell held racist views. He also expressed admiration for Adolf Hitler.

Authorities in London and many other U.K. cities have announced plans to review all statues, street names and other monuments to see whether they reflect modern values and the country’s current diversity. This is sure to lead to fiery debate. Some have called for the removal of statues of WILLIAM GLADSTONE, the reforming 19th-century prime minister whose father was one of the biggest slave-owners in the British West Indies. Gladstone defended slave owners and sought compensation for them when slavery was abolished.

Even national hero WINSTON CHURCHILL is a contentious figure. Britain’s wartime prime minister is revered by many in the U.K. as the man who led the country to victory against Nazi Germany. But he was also a staunch defender of the British Empire and expressed racist views.

Several statues have been placed under police protection in France amid protests against monuments to historical figures with links to the country’s colonial past and slavery.

JEAN-BAPTISTE COLBERT — Last week, police blocked protesters in Paris from reaching a statue of Colbert in front of the National Assembly, the lower house of the French parliament. The 17th-century politician, a prominent minister under King Louis XIV, drafted the “Code Noir” (“Black Code”), which regulated the conditions of slavery in French overseas colonies.

JOSEPH GALLIENI — Police in Paris also guarded a statue of French military commander Gallieni. He used brutal methods to quell rebellion of local populations in French colonies. As a late 19th-century governor of Madagascar, he abolished the 350-year-old monarchy on the island.

VICTOR SCHOELCHER — Even before George Floyd’s death in Minneapolis, protesters on the French island of Martinique toppled two statues of 19th-century politician Schoelcher on May 22, the anniversary of the abolition of slavery on the Caribbean island. Schoelcher prepared and wrote the 1848 decree abolishing slavery in France’s colonies. But protesters denounced his colonialist views and argued local abolitionists more worthy of honoring. French President Emmanuel Macron condemned the statues’ removal, tweeting last month that Schoelcher “has made France great” by abolishing slavery.

CHRISTOPHER COLUMBUS — Statues of the 15th-century explorer and the Spanish conquistadors who followed him and colonized much of the Americas have become targets for demonstrators in U.S. cities but not in Spain, the country that sponsored Columbus’ voyages. Although there has been increasing debate in recent years about Columbus’ legacy, his likeness occupies center-stage in many Spanish cities. A famous statue showing Columbus with his right arm extended and his finger pointing toward the sea stands tall on a column at the bottom of Barcelona’s Las Ramblas boulevard,. In Madrid, a central square named for him features a prominent Columbus statue surrounded by traffic.

In contrast, statues of Columbus in the United States are often vandalized on Columbus Day, which Native American groups have campaigned to rename Indigenous Peoples Day. Columbus memorials have been targeted in the U.S. this week.

GENERAL FRANCISCO FRANCO — The legacy of the dictator who ruled Spain for 35 years is still a raw issue that divides the country. Last year, the government of Socialist Prime Minister Pedro Sánchez succeeded in removing Franco’s body from a glorifying mausoleum on the outskirts of Madrid where his remains had laid for more than four decades. The remains were moved to a family chapel in a small public cemetery and have not become a focus of right-wing pilgrimages, as some had feared.

INDRO MONTANELLI — Monuments to Italy’s colonial past in North Africa — including obelisks carted off during the fascist rule of Benito Mussolini that adorn piazzas in Rome — have been largely ignored during protests, but a statue honoring a revered 20th century Italian journalist has attracted calls for its removal. Montanelli, who inspired a generation of Italian reporters, admitted in the late 1960s that he had a 12-year-old Ethiopian bride when he was a soldier during the Italian occupation of Ethiopia. He justified his action by saying it was the local custom. The statue, in a Milan park that bears Montanelli’s name was mentioned during a weekend Black Lives Matter protest, and an antifascist group called the Sentinels of Milan has called for its removal.

KING LEOPOLD II—The Belgian monarch who ruled Belgium from 1865 to 1909 held Congo as his personal fiefdom, forcing many of its people into slavery to extract resources for his personal profit. His early rule, starting in 1885, was famous for its brutality, which some experts say left as many as 10 million of Congo’s people dead. Statues of Leopold dot towns and cities across Belgium, but a growing movement wants him removed from public view. Statues of Leopold have been defaced in half a dozen cities in the past week. In Antwerp, authorities removed a statue that had been burned and splattered with red paint. It is unclear whether it will be re-erected.

JAN PIETERSZOON COEN—A statue of the Dutch Golden Age trader and brutal colonialist in his hometown of Hoorn, north of Amsterdam, has been the subject of debate for years. Coen was a leading figure in the Dutch East India Company, a 17th-century trading powerhouse, and is credited with founding Batavia, the city now known as Indonesia’s capital, Jakarta. But he also has gone down in history as the “butcher of Banda,” the man who ordered a bloody massacre on the Banda Islands in what is now Indonesia as a way of cornering the lucrative market for nutmeg and mace.

A plaque on the statue highlights both sides of his story. The text says Coen was “praised as a vigorous and visionary administrator,” but was also “criticized for the violent means by which he built up trade monopolies in the East Indies.” In 2012, the Westfries Museum that overlooks the statue held an exhibition dedicated to Coen, asking visitors to decide whether the statue should stay or go. Two-thirds of the 3,500 visitor votes were in favor of the statue staying.

Museum director Ad Geerdink said if Hoon political leaders decide to take down the statue, the Westfries would be happy to place it in its garden “not to honor Coen, but to put it into context.”