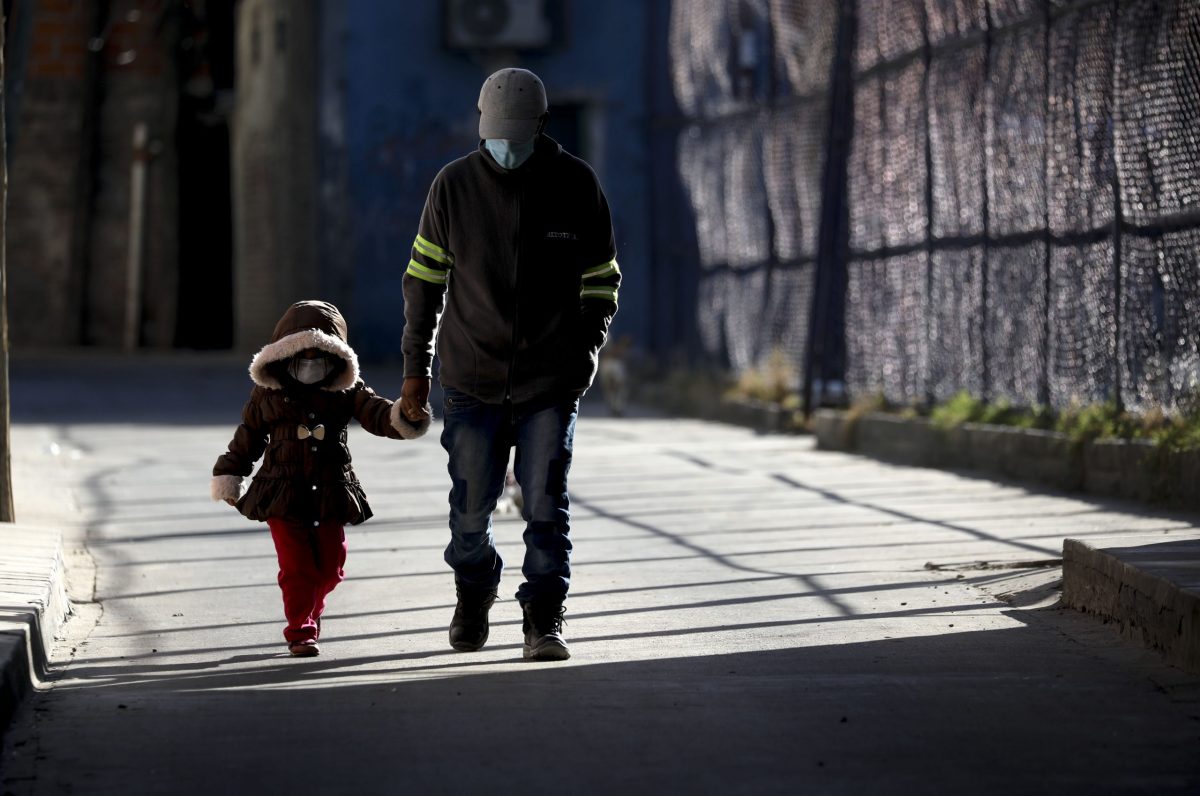 In this June 2, 2020 photo, a child is accompanied by an adult as they walk in the Villa 1-11-14 town, during a government-ordered lockdown to curb the spread of the new coronavirus in Buenos Aires, Argentina. (AP Photo/Natacha Pisarenko)

BUENOS AIRES, Argentina (AP) — As they wait out quarantine in a cramped, windowless room, Natividad Benítez brings her six children all of their meals from the soup kitchen where she earns $133 a month, barely enough to cover her rent and a few extra monthly costs.

Since the new coronavirus came to Argentina, the priest who employs her, the Rev. Juan Isasmendi, has gone from serving 350 meals a day to 7,000, feeding residents of a poor Buenos Aires neighborhood where economic activity has all but stopped due to strict anti-virus measures.

“Without his help I don’t know what would become of me,’’ she said. “It’s impossible to go looking for work in this situation of isolation.’’

The percentage of Argentines in poverty is expected to reach as high as 45% this year as the COVID-19 pandemic worsens an already grave economic crisis. The twin crises are presenting a grueling challenge to President Alberto Fernández, whose Peronist party was founded in the 1940s partly on the promise of caring for Argentina’s poor.

Even before the first case of coronavirus was diagnosed, prompting quarantines and curfews lasting more than three months, Argentina was facing 50% inflation, overwhelming debt and difficulty accessing credit in what economists call its worst crisis in two decades.

“Does anyone think I dreamed of an economy paralyzed by a quarantine?’’ he said recently. “I want a country that produces, that’s on its feet.’’

Several economists have cautioned that even after Fernández lifts anti-virus measures, it will be difficult to boost the economy back to the already weak pre-epidemic levels. Many are warning of Argentina’s worst crisis in two decades.

The World Bank foresees a 7.3% contraction in Argentina’s gross domestic product this year, one of the worst recessions in Latin America. Child poverty and deprivation among indigenous people are growing even faster, and beyond the poorest neighborhoods in Argentina’s cities.

Mirta González, who lives with her two children in a middle-class Buenos Aires neighborhood, recently traveled to a soup kitchen run by the Santa María Madre del Pueblo parish in the neighborhood where Natividad Benítez lives.

She lost her job as a house cleaner due to the impact of the coronavirus and the measures to stop it.

“I’m doing badly,’’ she said. “I can’t provide food or clothing for my children. I’m ashamed to come here, but I don’t have any other solution.”

One of the world’s biggest producers of soy, wheat and other foodstuffs is facing a hunger problem.

Social Development Minister Daniel Arroyo told The Associated Press that the number of Argentines receiving food aid since the crisis began has gone from 8 million to 11 million.

Such social benefits have been one of the trademarks of Peronism and Fernández has had to increase aid on a variety of fronts — from cash aid for food purchases to budget assistence to provinces, cities and a national network of churches and aid groups with a long record of providing aid during past crises.

Arroyo said Peronists saw the moment as one of “great responsibility and great challenge.’’

“Argentina has a history of falling and getting back on its feet,” Arroyo said.

Cristian Mosqueira, a homeless man who sleeps in a Buenos Aires plaza, said,

“I’d ask the president to help those who really need it … one day the people won’t be able to take it anymore.”