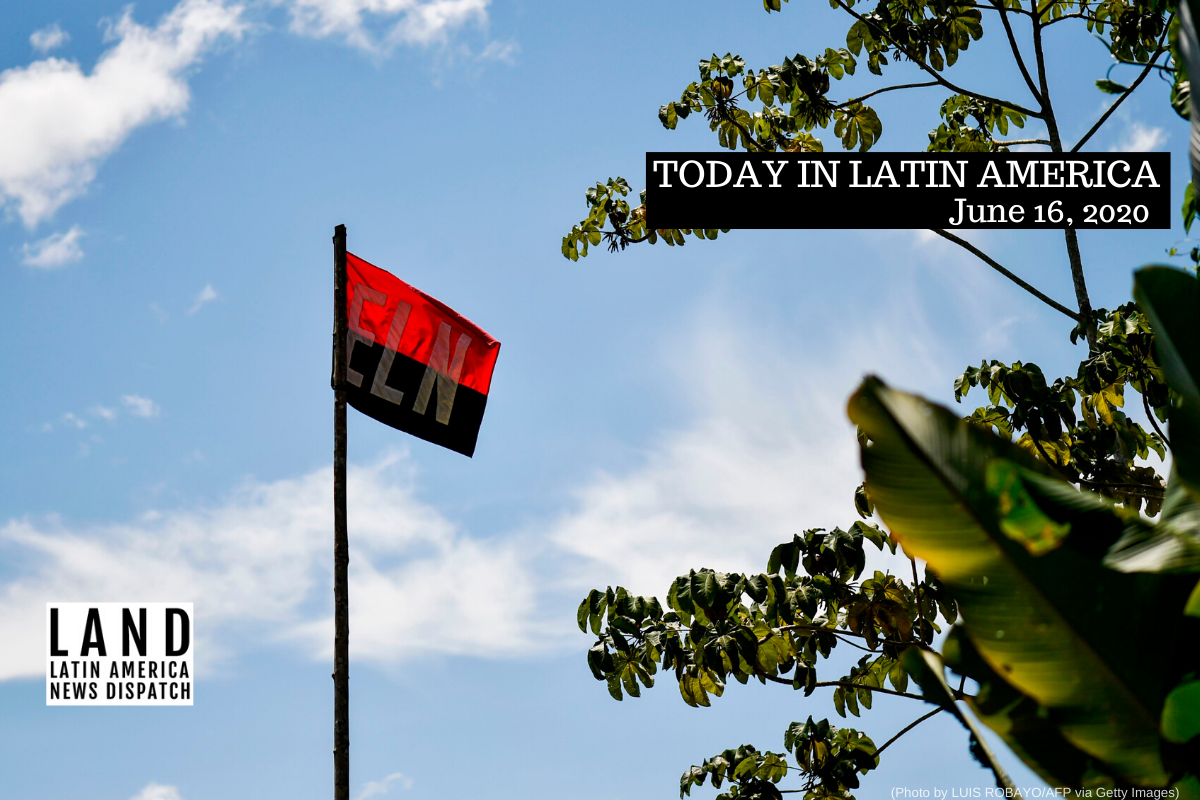 A flag of the ELN guerrilla (National Liberation Army). (Photo by LUIS ROBAYO/AFP via Getty Images)

COLOMBIA: The National Liberation Army rebel group, known as the ELN, released two police officers and four civilians on Monday. Some had been held hostage for months. It followed and earlier hostage release last Friday. The ELN has signaled it wants to resume peace talks with the government of President Iván Duque. Talks ended in January 2019 after the government accused the left-wing rebel group of detonating a car bomb in Bogotá that killed more than 20 people.

The ELN called for a ceasefire in late March because of the coronavirus, but it ended a month later as the Colombian military continued to carry out offensives against the group. Duque has said that he will not resume peace talks until all hostages are released and kidnappings end. So far this year, the ELN has released 13 hostages to the International Committee of the Red Cross. The government claims the group is still holding 10 hostages.

ARGENTINA:Argentine Bishop Gustavo Zanchetta has returned to work at the Vatican even though he is still under investigation for alleged sexual abuse of two seminarians in Orán, Argentina, in 2016. Zanchetta was appointed by Pope Francis to serve as an assessor at the Vatican’s central bank in 2017. Last year, the Vatican suspended Zanchetta from his role while the investigation was underway.

BRAZIL: Federal police arrested the leader of a Brazilian right-wing group that supports President Jair Bolsonaro yesterday. Sara Fernanda Giromini, also known as Sara Winter, is under investigation for threatening national security. Giromini is the head of the “300 from Brazil” movement, which defends Bolsonaro’s conservative policies and has threatened to train armed militants. In late May, she led a group of torch-carrying protesters to the Supreme Court following a separate investigation into her alleged role in spreading fake news.

ECUADOR: Diego the tortoise, who became famous for helping to save his species from extinction, returned home to the Galápagos yesterday. Diego and 14 other tortoises are back on Española Island after participating in a breeding program at the Fausto Llerena Tortoise Center. Diego, who is over 100 years old, was credited with 40% of the offspring born at the center, which closed its breeding program in January after reaching its conservation goal.

JAMAICA/BAHAMAS: Jamaica began to open its borders to tourists yesterday after 12 weeks of lockdown because of the coronavirus. The country was one of the last in the Caribbean to close its borders and one of the first with a large tourism industry to reopen. The Bahamas also began to slowly open up for tourism yesterday, allowing tourists on boats and yachts to sail in its waters and private charter planes to land. The country will open up completely to foreign tourists on July 1.

PUERTO RICO: Federal authorities reported yesterday they pulled canvas bags containing more than $2 million from the water last week near Vieques after a boat chase. The people in the boat, who fled, have not been identified. Air and Marine Operations and Customs and Border Protection carried out the operation and chase.

EL SALVADOR: The first of five phases to reopen El Salvador’s economy begins today after nearly three months of lockdown. Economy Minister María Luisa Hayem said the timeline of the rest of the phases will depend on whether coronavirus cases increase, but will also take into account GDP, unemployment and mental health. Thousands of workers, from construction workers to beauty salon employees, are expected to return to work this week. Companies are expected to provide hand sanitizer and easily accessible places to wash hands.

MEXICO: President Andrés Manuel López Obrador said yesterday that he would consider selling gasoline to Venezuela if the country asked for it. The United States has imposed sanctions on Venezuela and its state-owned oil firm, PDVSA. Venezuela has suffered a fuel shortage since March. AMLO said he would sell gasoline to the country for humanitarian reasons and is not beholden to U.S. policy there. “No hegemony can squash another country,” he said.

UNITED STATES: Alex Naím Saab Morán, the Colombian businessman who was arrested in Cape Verde last week, could be extradited to Miami despite no extradition treaty between the United States and Cape Verde. The United States has 18 days to request his extradition, and a court in Cape Verde will decide whether to honor it. Saab is accused of money laundering on behalf of the Venezuelan government of Nicolás Maduro. U.S. officials believe Saab has a wealth of information about Maduro’s government and family.