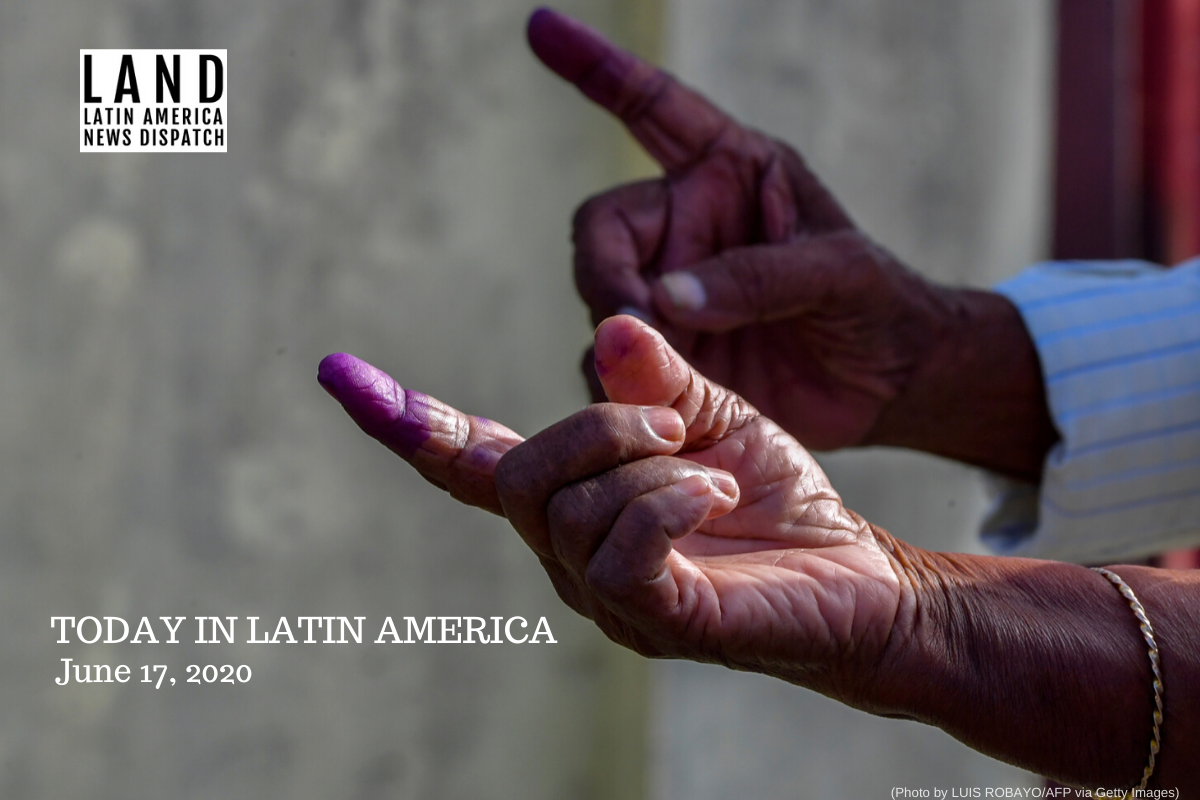 Guyanese citizens show their inked fingers after voting, in Leonora, Guyana, on March 2, 2020. (Photo by LUIS ACOSTA/AFP via Getty Images)

GUYANA: A day after the Organization of American States (OAS) called on the government of Guyana to accept defeat in the March 2 elections, Chief Elections Officer Keith Lowenfield maintained that the results were not valid. Lowenfield said votes were registered for people who had died or emigrated, but the OAS and CARICOM both stated that the recount was accurate, despite some irregularities.

Incumbent President David Granger, who belongs to the A Partnership for National Unity (APNU) party, faced Irfaan Ali of the opposition People’s Progressive Party (PPP) in the March elections. Both Granger and Ali claimed victory, and the Supreme Court ordered a recount soon after. The election is important as Guyana prepares for an oil boom. The political stakes are high, as some think the oil deal will bring immense wealth to the country, while others warn it presents significant risks.

BRAZIL: Federal police raided the homes of several supporters of President Jair Bolsonaro yesterday as part of an investigation into their alleged funding of “anti-democratic” rallies. The raids follow the arrest of Sara Fernanda Giromini, known as Sara Winter, the leader of the pro-Bolsonaro movement “300 from Brazil,” on Monday. Among those targeted in the raids were 11 federal lawmakers, including Congressman Daniel Silveira, and conservative blogger Allan dos Santos. Supreme Court Justice Alexandre de Moraes authorized the raids and gave police permission to look at financial and phone records. Meanwhile, Bolsonaro’s government has called for a criminal investigation into a cartoonist who published a cartoon showing Bolsonaro painting a red cross —a symbol of hospitals— and turning it into a swastika.

PERU: The country experienced an unprecedented percentage drop in GDP in April as the country nearly shut down because of the coronavirus. The economy shrank over 40%. The mining industry, which makes up 60% of Peru’s exports, particularly suffered. President Martín Vizcarra allowed full mining operations to resume in May, and the economy is expected to start recovering. Vizcarra acted quickly and imposed one of the strictest lockdowns in the region. Even so, the country still became a hotspot for the virus, as severe inequality meant many Peruvians could not isolate for days on end.

VENEZUELA: The Supreme Court replaced the board of directors of two parties in a coalition opposed to President Nicolás Maduro yesterday. The court, which is loyal to Maduro, took the action against the Justice First and Democratic Action parties. With elections scheduled for later this year, the move is likely to strengthen Maduro’s party and fuel accusations of election tampering.

DOMINICAN REPUBLIC: The United States deported 43 Dominicans yesterday after they completed prison sentences. According to Listin Diaro, despite the spread of the coronavirus in prisons, 690 Dominicans who served prison sentences in the U.S. have been deported this year . Between February 3 and April 24, ICE carried out 232 deportation flights to Latin American countries, according to the Center for Economic and Policy Research. The deportees were checked for coronavirus symptoms upon landing and will be quarantined for 14 days. The Dominican Republic has had over 23,000 confirmed cases of the virus and 615 deaths.

JAMAICA: Bus and taxi drivers have threatened to go on strike next Monday, demanding a 100% increase in fares. The head of the Transport Operators Development Sustainable Services group said Monday that they have not received a raise in eight years. Some drivers suspended their services as the coronavirus spread on the island, but the tourism-dependent economy has begun to reopen after suffering for months without visitors.

Hernández said his symptoms are light and he will continue working remotely. He said he will follow the “MAÍZ” protocol recommended by Honduran doctors, which calls on patients to take Microdacyn, Azitromicin, Ivermectin and Zinc. Honduras has reported 9,656 cases of COVID-19 and 330 deaths.

NICARAGUA: Edén Pastora, known as “Commander Zero,” died yesterday of a respiratory ailment at 83 years old. Pastora was a key leader of the Sandinista National Liberation Front during the overthrow of military dictator Anastasio Somoza Debayle in 1979. He was denied a role in the government that followed and went into exile for years. In 2006, Pastora unsuccessfully ran for president. He openly criticized the protests that began in April 2018, and spoke in favor of the Ortega government’s brutal crackdown on protestors.

MEXICO: Authorities announced yesterday that a federal judge and his wife were killed in the western state of Colima. Federal judges frequently preside over cases involving drug cartels, and are known to be pressured by organized crime. Even so murders of judges are very rare. Authorities said it appeared the murderers broke into the home of Judge Uriel Villegas Ortiz and Verónica Barajas and shot them.

MEXICO-UNITED STATES-CANADA: The North American countries agreed to keep their borders closed for non-essential travel until July 21 due to the coronavirus. The closures began in mid-March and have been extended incrementally in 30 day periods since then. Canada has been hesitant to open up its border as the United States has the most coronavirus cases in the world. President Donald Trump has sought to keep the southern border closed as migrant apprehensions have dropped drastically.