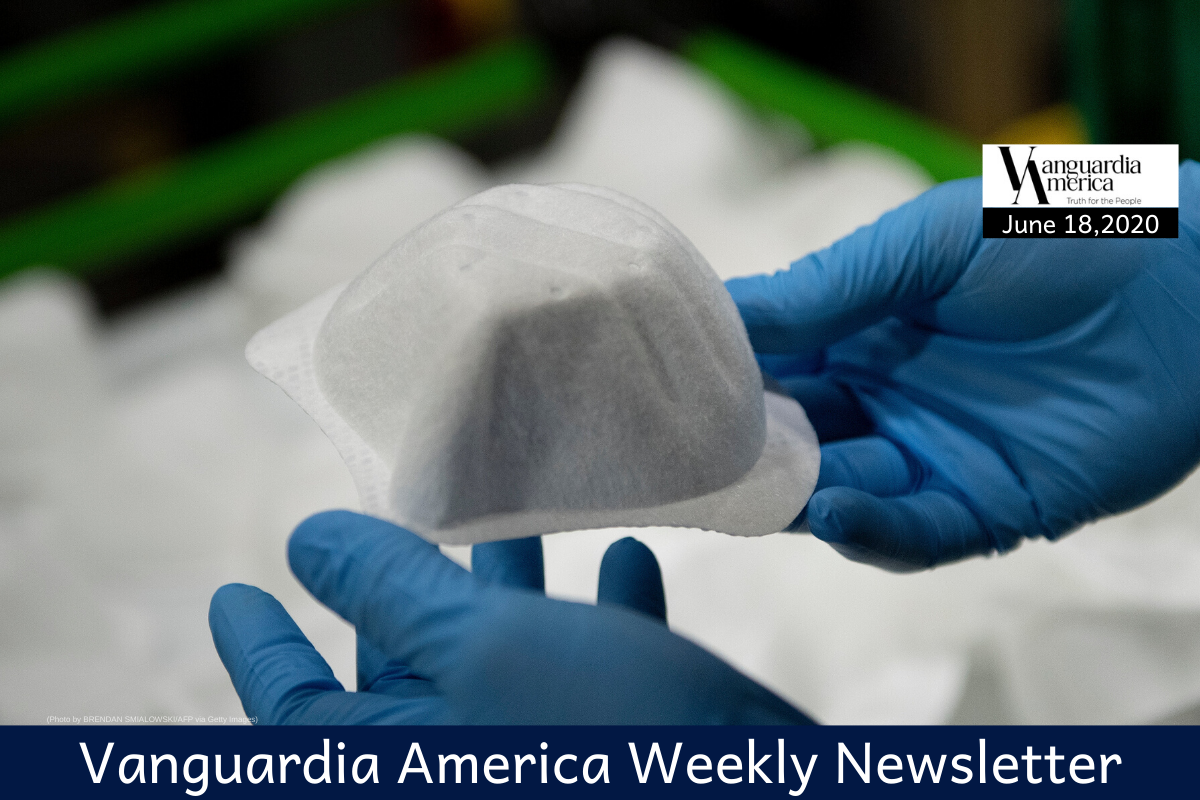 A worker at a Honeywell International Inc. factory works on N95 masks May 5, 2020, in Phoenix, Arizona. (Photo by BRENDAN SMIALOWSKI/AFP via Getty Images)

PHOENIX – The number of migrant detainees testing positive at a federal migrant detention center in Arizona has jumped more than 400 percent in the past five days, accounting for 50 percent of the growth in coronavirus cases among detained migrants nationwide.

A spokeswoman for Immigration and Customs Enforcement (ICE) told the Arizona Mirror that the increase is due to more testing. “As a result of these increased efforts, more cases have been identified,” said ICE spokesman Yasmeen Pitts O’keefe, who added that “the Eloy Detention Center has also restricted intake for all new admissions to the facility to further protect those in custody.”

Arizona is among several states in the Southwest that reported record increases this week in the number of COVID-19 cases and hospitalizations. On Tuesday, the state reported 2,392 new infections. It’s been a month since Arizona’s stay-at-home order expired.

In a recent press conference, Governor Doug Ducey told reporters “this virus is something we need to learn to live with.” But a growing chorus of state leaders, including Congressman Ruben Gallego, have called on Ducey to mandate that Arizonans wear masks to slow the spread of the disease.

In a lawsuit filed earlier this month, attorneys said detainees at the Eloy facility are “trapped in what are essentially tinderboxes on the verge of explosion.”

Stephen Ray Baca, a 31-year-old former city council candidate was arrested Tuesday and charged with aggravated assault with a deadly weapon, after allegedly shooting a man who was with protesters trying to tear down the statue of a Spanish conquistador.

Cellphone video “showed protesters hitting Baca with a skateboard, punching him and chasing him before he opened fire,” according to the Associated Press.

Albuquerque Mayor Tim Keller said at a press conference that a separate video taken earlier in the day showed Baca “agitating at the protest well before the shooting” and throwing a woman to the ground. The woman was also pepper sprayed by Baca.

The statue was being guarded by a local militia group called “The New Mexico Civil Guard.” Police have not confirmed if Baca was a member of the group. Keller told reporters the New Mexico State Police are investigating the incident, adding that the statue would be removed and placed in storage for the time being.

KRQE News 13 reported that multiple protesters had called police to the scene “as tensions rose” before the shooting, “but police did not arrive until after the protester was shot.”

According to the AP, the man who was shot is named Scott Williams. He suffered several gunshot wounds to his torso. Authorities said he was in critical but stable condition at a local hospital.

My statement on the “militia” and violence in Albuquerque tonight: pic.twitter.com/BZISvyau3k

In a statement released by Gov. Michelle Lujan Grisham on Twitter, she condemned the violence, saying she was “horrified and disgusted” by the shooting. She criticized the militia group for showing up to “menace the protesters … To menace people of New Mexico with weaponry.”

As the nation continues to reel from the deadly effects of the COVID-19 pandemic, The Trump Administration has moved forward with several major policy initiatives aimed at curbing immigration to the United States.

In one of its latest moves, the administration has proposed making extensive changes to asylum law. Critics say “the sweeping restrictions [such as penalizing asylum seekers for not paying taxes or being in the country undocumented for longer than a year] would make it easier for immigration judges to reject asylum requests out of hand.”

The goal is to put rules in place that could be enforced long after the pandemic has ended.

Tens of thousands of migrants forced to remain in camps and shelters in Mexico at our southwest border have already been “effectively blocked” from seeking asylum, according to the New York Times, and an executive order has temporarily suspended the “issuance of green cards to many outside the United States.”

In April, U.S. Education Secretary Betsy DeVos barred undocumented immigrants, including recipients of Deferred Action for Childhood Arrivals (DACA), from receiving COVID-19 relief funds to help with emergency expenses, such as housing, food or health care. DACA recipients just received the news today that DACA will not be suspended after a decision from the Supreme Court rejected Trump’s effort to end the program.

In the coming days, federal officials are expected to announce restrictions to student and work visas, as a follow up to limits to temporary work visas ordered in April. “The White House has made it clear it’s considering suspending H-1B visas for high-skilled workers; H-2B visas for seasonal workers and L-1 visas for employees transferring within a company to the U.S,” according to the Associated Press.

The U.S. Supreme Court rejected an appeal to a lower court ruling that upheld California’s right to “limit cooperation between state and local law enforcement and federal immigration authorities,” according to The Hill.

“We already have enough issues with law enforcement being weaponized against the communities that they were intended to protect,” de León told the Sacramento Bee. De León was recently elected to the Los Angeles City Council.

Vanguardia America is a free weekly newsletter. To sign up, email Editor and Publisher James E. Garcia at vanguardianews@gmail.com