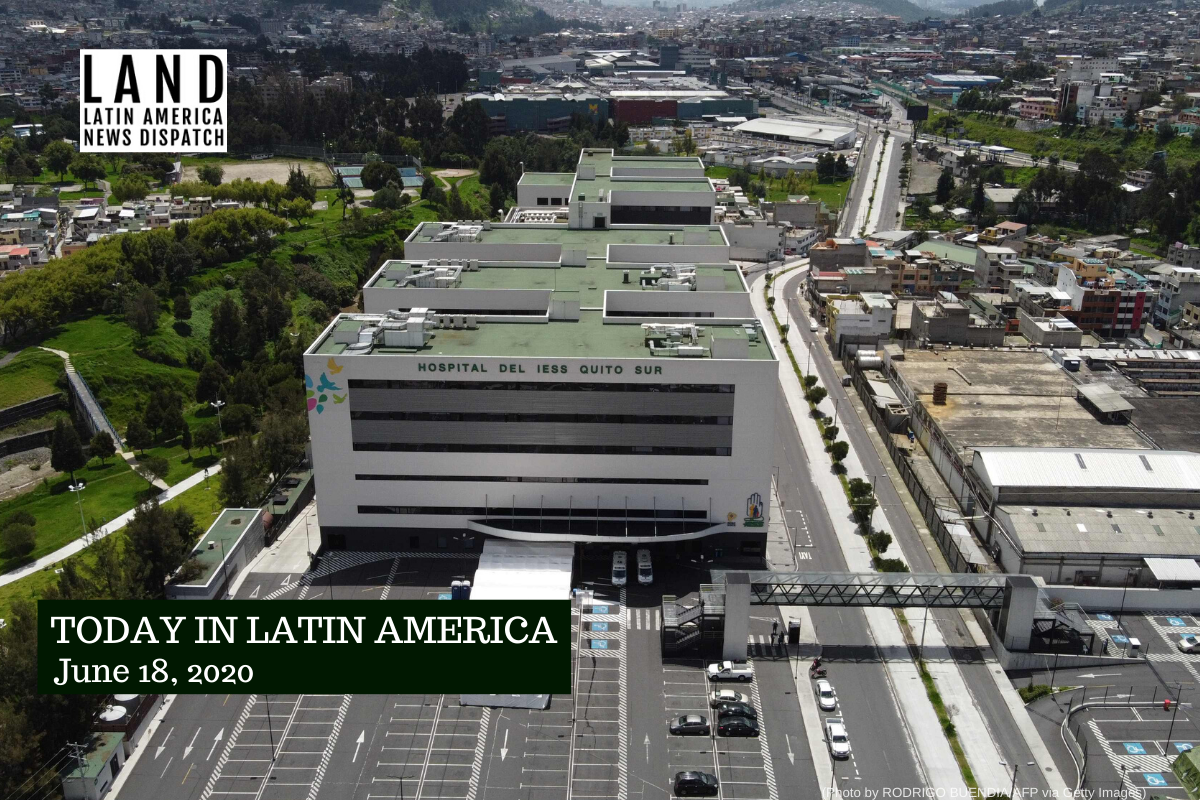 ECUADOR: At least 50 public hospitals in Ecuador are under investigation after allegations arose that provinces where National Assembly members are from were allocated more supplies to combat COVID-19 than others. A special council made up of Ecuadorian citizens, known as the Council for Citizen Participation and Social Control, will be leading the investigation, with 22 of Ecuador’s 24 provinces currently under review. Prosecutors have already presented 27 cases against several hospitals, including dozens of allegations of embezzlement.

Ecuador has one of the highest rates of coronavirus in the region, with 37,000 cases and more than 2,000 deaths. The outbreak was so drastic in the city of Guayaquil last month that hundreds of bodies were left in homes and on streets. Overwhelmed hospitals have been accused of losing bodies of the deceased. Economic instability during the pandemic recently led to mass protests in the country, with police injuring many demonstrators.

ARGENTINA: President Alberto Fernández is voluntarily isolating himself amidst a rising number of coronavirus cases in Argentina. Reported cases of COVID-19 have nearly quadrupled since May, following an ease of restrictions after one of the strictest lockdowns in the region. Fernández had recently been in contact with local officials who had met with other officials that have tested positive for the virus. Despite the recent increase, Argentina currently has one of the lowest rates of COVID-19 in Latin America, with 35,000 cases and 878 deaths.

BOLIVIA: The public health system is struggling to serve indigenous populations affected by COVID-19. Los Tiempos reported that health officials fear that the subpar medical care for indigenous people may result in a much higher death rate that is not yet confirmed. Indigenous communities are also affected by underlying health conditions, leaving them particularly vulnerable to the pandemic. Because the number of indigenous people affected by the coronavirus in remote areas can only be counted by local authorities, other deaths seemingly unrelated to the virus may also not being taken into account. Bolivia currently has more than 20,000 cases of COVID-19.

COLOMBIA: Members of the Senate’s First Committee announced a new proposal which will seek life sentences for defendants charged with femicide. Legislative officials stated the decree as “necessary” as Colombia faces a rise in murders of women during the pandemic. More than a third of femicides in Colombia this year have occurred during the national lockdown. The country has also seen a rise of more than 50% of reported domestic abuse cases since the lockdown began. The proposal is expected to be followed by several public hearings during the next few months.

PUERTO RICO: Governor Wanda Vázquez Garced plans to give a State of the Union address today, which would be potentially unconstitutional. According to Article 17 of the Constitution, the governor may only summon the Legislative Assembly outside of the meeting chambers with the approval of the legislative body. Vázquez’s letter asking the legislature for permission to hold the meeting has only reached the House, not the Senate. If her request is not approved, Vázquez could be accused of using public funds to enhance her image, which is illegal.

HONDURAS: After announcing that both he and his wife tested positive for coronavirus, Honduran President Juan Orlando Hérnandez was hospitalized last night with pneumonia. In a news conference, government officials said that Hérnandez had to be admitted in order to receive medicine, but was otherwise in good condition. First Lady Ana Gárcia de Hernández is asymptomatic, and two of the president’s aides are also currently infected. Hernández was reelected in November 2017 during a controversial election, and is currently being investigated by U.S. prosecutors for his alleged involvement in drug trafficking.

MEXICO: Authorities recorded the third-highest daily number of deaths on Tuesday, at 730. The country’s rise in deaths is nearly the same as the average number of daily deaths in the U.S. Nearly 24% of cases are healthcare professionals, with more than 32,000 cases and 463 deaths. Despite the increase, Mexico issued new guidelines for religious gatherings, with churches opening at 25% capacity. The Guardian recently reported on secret church services occurring during the national lockdown, with thousands of attendants gathering in different private masses.