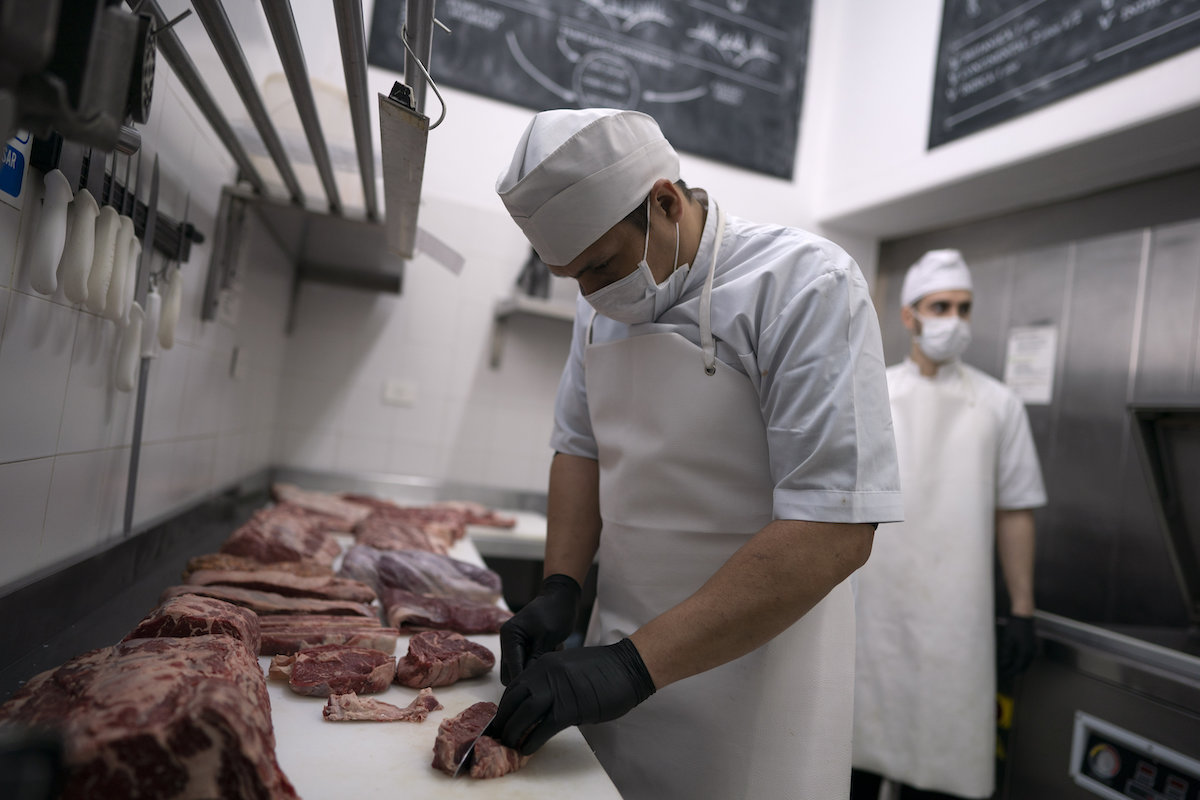 In this June 12, 2020 photo, a butcher cuts meat at Don Julio butcher's shop in Buenos Aires, Argentina. Don Julio's steakhouse turned itself into a high-end delivery butcher shop after the restaurant was forced to closed on March 20th due to the COVID-19 pandemic. (AP Photo/Victor R. Caivano)

BOGOTÁ, Colombia (AP) — Before the pandemic began, the Leo restaurant prided itself on taking customers on a culinary journey through Colombia.

Inside the refurbished colonial home, diners feasted on set menus of at least 12 courses that included a thin slice of Pirarucu fish from the Amazon wrapped in its own skin and a bite-size portion of Caribbean duck stew, served on a purple corn tortilla and topped with edible flowers.

Dining at Leo’s has been banned since mid-March, when Colombia started to enforce social distancing measures. So chef Leonor Espinosa now uses her restaurant’s kitchen to make takeout dishes like pork-belly tacos that are cheaper to make and easier to carry in cardboard boxes.

“We had to find some way to mitigate the impact of this crisis” said Espinosa, who has been forced to lay off about half of her staff. “So we’ve created a take-away brand that is more suited to the current needs of the market.”

The virus has punished the industry severely as sales plummet and restaurant owners are stuck with fixed costs like rent. That’s prompted some places to reinvent themselves in order to stay afloat.

In Argentina, the Don Julio steakhouse ranked 34th on San Pellegrino’s list of the world’s top restaurants last year. Now it has become a butcher’s shop that delivers cuts of organic beef to customers around Buenos Aires. Chef Pablo Rivero says he prefers to sell raw cuts of his prized beef to stuffing his dishes into takeout boxes and compromising their quality. The butcher’s business has helped him to avoid laying off staff. “This helps us to stretch our funds” he said.

In Chile, where eating in at restaurants has been banned since March, prize-winning El Europeo has suspended its tasting menu and stopped cooking lamb tenderloin and octopus imported from the remote Robinsoe Crusoe island. Now El Europeo runs a delivery service that features pizza, sushi and beef tartare.

“It’s time to lay egos aside and fight for our survival” said Max Raide, one of the restaurant’s owners.

Some famous restaurants have had to cease operations altogether while they ride out the storm. In Colombia’s capital, La Puerta Falsa has been serving hot chocolate and tamales since 1816, surviving the nation’s independence war, a guerrilla attack against a nearby Supreme Court building and a riot in 1948 that burned down most of Bogota’s center.

The coronavirus lockdown has forced the historic restaurant to lay off its staff of 14 and close its colonial-era building until social distancing measures are lifted.

“We don’t know how to do takeout” said Carlos Sabogal, 84, whose family has owned the restaurant for six generations. “I also worry that if we did that, the taste of our products would just not be the same as what our clients are used to.”

In Cuba, the restaurant business, which depended largely on tourism, has ground to a halt. But the state-run economy ensures the survival of traditional places like La Bodeguita del Medio.

The bar, which helped to popularize the mojito cocktail and was once a favorite haunt of Ernest Hemingway, has been state-owned since the early sixties, when it was nationalized by Fidel Castro. Its employees have been sent home and are still paid a portion of their $30 a month state wage. But they are missing out on tips from tourists that normally triple their salaries.

Elsewhere in Latin America, where the market economy prevails, many restaurants are going under.

Guillermo Gómez, the director of Colombia’s restaurant association, says that by the end of May, 27,000 of the country’s 90,000 restaurants had shut down for good as they struggled to pay rent, salaries and public services with little income.

Gómez said that sales from takeout have failed to make up for revenue lost from in-person service. Restaurants have also struggled to secure loans as the government provides little clarity on when they will be able to host customers again, or under which rules. “Banks now see us as a high risk business” Gómez said.

Those with some savings continue to soldier on with smaller staff, while elite eateries prepare for a more austere future.

Colombian chef Leonor Espinosa says that she might be “less rigid” when her restaurant can once again resume in-person service, and may offer a la carte options along with her elaborate tasting menu.

But she says she will continue to make experimental dishes with exotic ingredients from remote corners of Colombia. “We are not going to give up on our philosophy” Espinosa said. “We will continue to connect people with territories.”