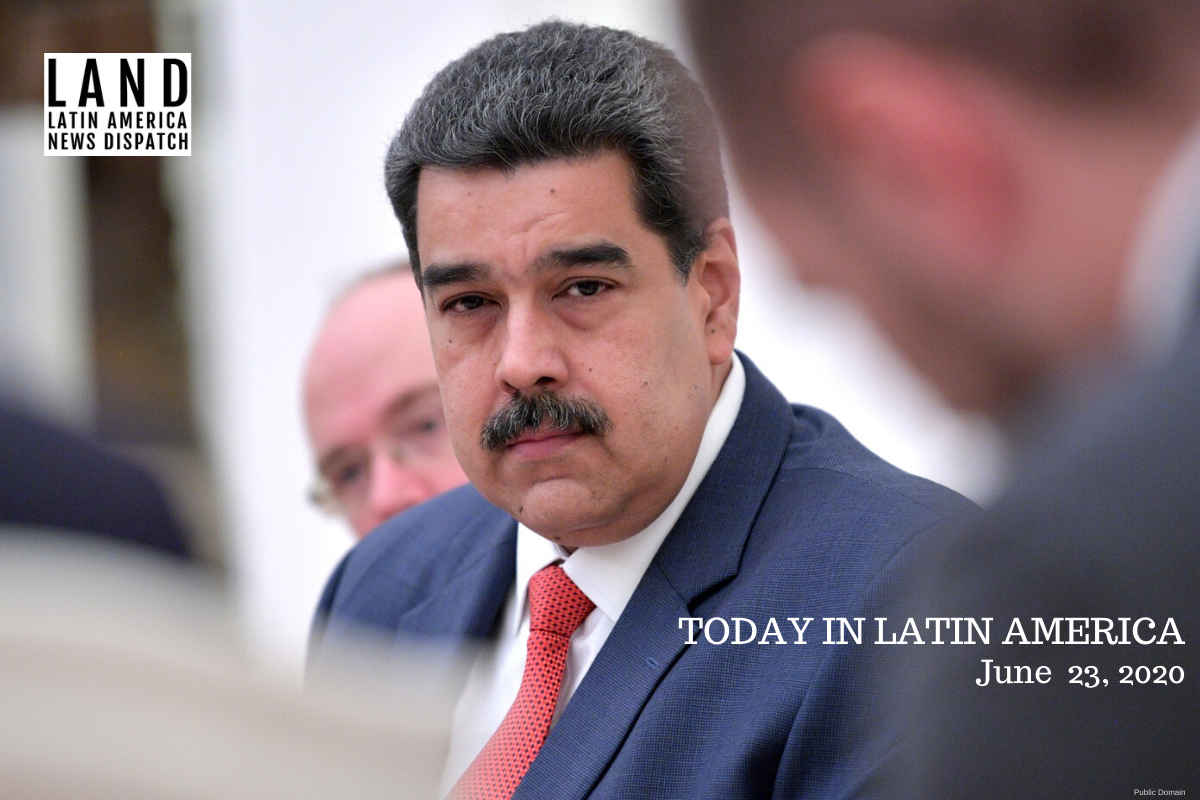 VENEZUELA/UNITED STATES: In an interview published Sunday, U.S. President Donald Trump said he would be open to meeting with Venezuelan President Nicolás Maduro. The comment appeared in contradiction to administration policy on Venezuela. On Monday, Trump changed course, saying he would only meet with Maduro to discuss him stepping down. Maduro responded, saying he would meet Trump if the meeting was respectful, “just like he met with [Joe] Biden” when Biden was vice president.

In the Sunday interview, Trump also made vague comments about his support for Juan Guaidó, whom the administration recognized as Venezuela’s interim president last year.

“I think that I wasn’t necessarily in favor, but I said—some people that liked it, some people didn’t,” Trump said.

CHILE: The country has passed Italy in coronavirus cases and now has the 8th highest number of cases in the world. More than 242,000 cases have been recorded, with 4,479 deaths. A group of medical experts and scientists in Chile sent a letter to President Sebastián Piñera on Monday, warning that 70,000 could die in Chile before the pandemic ends if they do not impose more severe lockdown measures. A report from CIPER Chile shows that there is a significant economic disparity in coronavirus-related deaths. The death rate in public hospitals is twice that of private medical institutions.

BOLIVIA: Following contradictory statements in recent days, Interim President Jeanine Áñez announced Sunday that the presidential election will go forward on September 6. The election was originally scheduled for May 3 but was delayed because of the coronavirus pandemic. Áñez hesitated to sign the election bill, saying coronavirus infections would peak around September. Opponents have accused her of trying to maintain her hold on power.

COLOMBIA: Social leader Edier Adán Lopera was assassinated in the town of Tarazá, in the department of Antioquia, last week. A community group says that an armed paramilitary group is preventing them from recovering his body. Lopera was an activist and coordinator for a local community action board. He is the fifth social leader murdered in Tarazá this year.

BARBADOS: A photojournalist for the Barbados Nation was killed on Tuesday when he arrived at a crime scene in St. Michael. According to local media reports, Christoff Griffith, 25, was responding to a report of a murder. Arriving at the scene, police found Griffth’s body, and the first victim. The Barbados Association of Journalists & Media Workers (BARJAM) released a statement, saying, “The media fraternity has lost one of its brightest young sparks in Christoff Griffith, who was killed in the line of duty.”

PUERTO RICO: The Electric Power Authority awarded a consortium of private U.S. and Canadian companies a 15-year, multimillion-dollar contract to operate the public power company’s transmission and distribution system, officials announced yesterday. The power company will keep their ownership of the system, but the consortium will operate it, making it a public-private partnership. The consortium, LUMA, is made up of Canadian firm ATCO and U.S. firms Quanta Services Inc. and IEM. The deal will allow Puerto Rico to receive federal funds to rebuild its electrical network after Hurricane Maria severely damaged its power grid in 2017.

REGION: A giant plume of dust that originated in the Sahara Desert has significantly impacted air quality in much of the Caribbean. The 4,000-mile-long cloud, known as Sahara dust, is the largest and most concentrated in 50 years. Health experts are concerned about its impact on those with respiratory problems, including people who are sick with the coronavirus. The cloud is moving towards the southeastern region of the United States.

PANAMA: Authorities in Panama exhumed the remains of 19 victims of the 1989 U.S. invasion as part of an investigation to determine the true death toll. Around 500 Panamanians are believed to have been killed, but some human rights groups say the toll is likely much higher. The invasion was the largest U.S. combat operation since the Vietnam War and ended with the capture of General Manuel Noriega and the deaths of hundreds —or thousands— of Panamanians. Many of the victims’ families are still waiting for their loved ones to be identified.

MEXICO/CANADA: The two countries reached an agreement Sunday to improve health and safety conditions for Mexican farm workers in Canada after two workers died from the coronavirus. Last Tuesday, the Mexican government said it would stop sending workers to Canada, but they will resume now that there is a new safety agreement. Almost half of the migrant farm workers in Canada come from Mexico. Canadian Prime Minister Justin Trudeau declared migrant workers essential during the pandemic and vowed to improve the conditions that advocacy groups have long said were unsafe.

UNITED STATES: A presidential proclamation on Monday temporarily suspends the entry of foreigners on several types of work visas, including H-1B, H-2B, J-1, and L-1. The administration said the decision was to protect U.S. jobs during the economic downturn, but several large companies spoke out against the move. The measure includes exceptions for food supply chain workers, and health care workers.