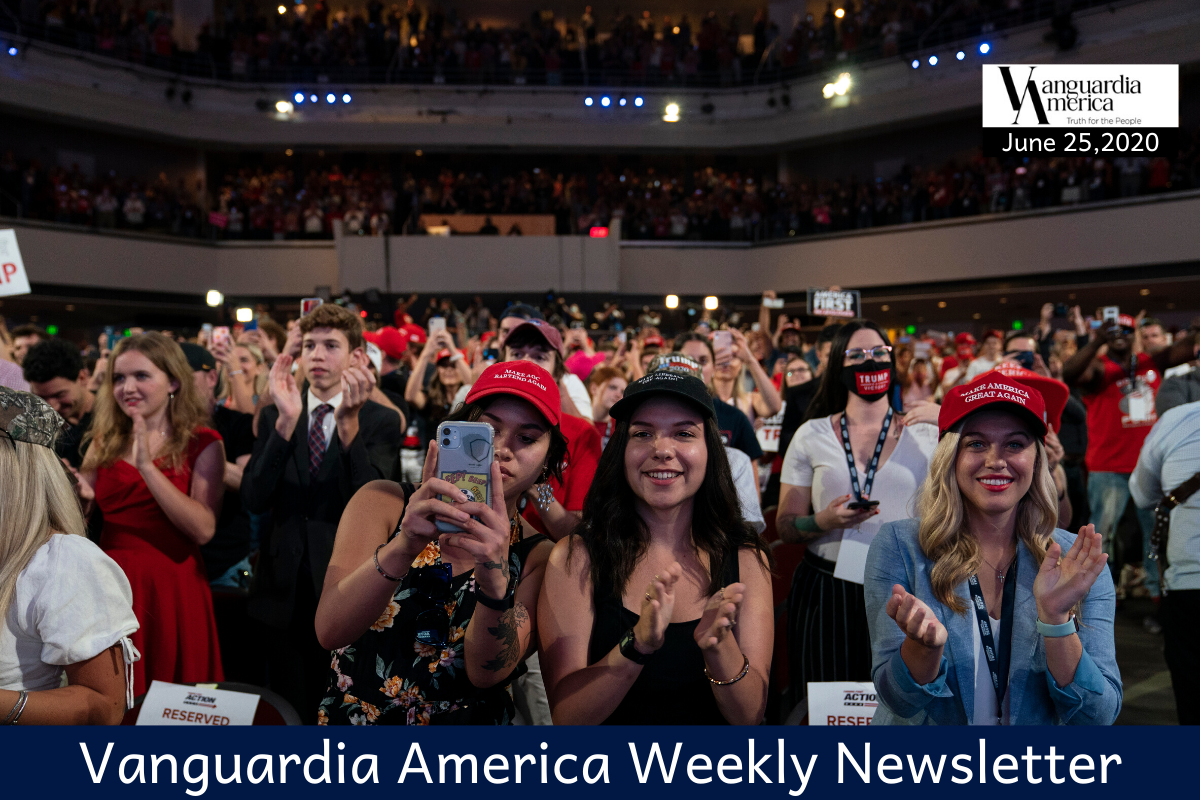 Supporters of President Donald Trump cheer as he arrives to a group of young Republicans at Dream City Church, Tuesday, June 23, 2020, in Phoenix. (AP Photo/Evan Vucci)

PHOENIX — “I just got back from something you like, the border wall,” President Trump told a crowd of about 3,000 supporters during a Tuesday campaign rally in Phoenix. Later in his speech, he used an ethnic slur against Asian Americans.

In recent weeks, Trump has repeatedly visited Arizona, a battleground state in the upcoming general election where one in four eligible voters is Latino and national polling shows him running just behind former Vice President Joe Biden, the presumptive Democratic nominee for president.

Among other false claims made by the president on Tuesday, Trump told reporters that in addition to blocking the entry of undocumented immigrants, the border wall had stopped COVID-19.

During his 2016 campaign, Trump vowed to build a wall from coast-to-coast along the U.S.-Mexico border and insisted Mexico would pay for it. While major improvements, reinforcements and new wall construction has occurred along 200 miles of the border, only three new miles of wall have been built where no barriers existed before, according to the Washington Post. Most of the work to date has been financed with money taken from the Defense Department. Mexico has not provided any funding for the project.

During his speech to Students for Trump, the president used a racial slur to describe people of Asian descent. The crowd cheered wildly. Asian Americans have condemned the president for his use of racist language as part of his effort to blame China for the ongoing COVID-19 health crisis. More than 120,000 people in the U.S. have died from the coronavirus since the first reported case in January.

Phoenix Mayor Kate Gallego criticized the president for holding the rally at a local mega-church amid a record number of COVID-19 cases and hospitalizations in Arizona. Phoenix approved a mask-wearing ordinance on Friday, but did not enforce at the rally. About 3,000 people attended Tuesday’s event, though very few in the crowd wore masks or engaged in social distancing.

Calls for Independent Investigation in Police Shooting of Andrés Guardado

The Los Angeles County Board of Supervisors wants an independent investigation into the death of 18-year-old Andrés Guardado. The teenager was shot and killed by a sheriff’s deputy last week.

Guardado was killed while working as a security guard at a local body shop. A county sheriff’s department spokesman said Guardado wasn’t wearing a uniform when he was shot, adding that a gun found at the scene was not registered.

Protesters have condemned the sheriff’s department’s handling of the investigation. A march was held in his honor Sunday in Los Angeles.

The teen’s family say Guardado, in addition to his job at the body shop, “worked a second job and was studying at Los Angeles Trade-Technical College,” according to a Latino Rebels report.

After a stinging rebuke by the U.S. Supreme Court last week that described President Trump’s legal challenge against DACA as “arbitrary and capricious,” the president told supporters at a campaign rally in Tulsa that he’ll keep trying again to kill the program

Trump told about 6,200 supporters at a campaign rally Saturday in Tulsa. “We’re going to be refiling. Everything’s going to work out really good.”

In a 5-4 decision earlier this month, the Supreme Court upheld a lower court challenge to the Trump Administration’s effort to terminate the program known as Deferred Action for Childhood Arrivals, or DACA, which provides temporary legal authority to stay in the U.S. to more than 650,000 young undocumented immigrants brought here by their parents.

Writing for the majority, Chief Justice John Roberts, said the Trump administration had not “complied with the procedural requirement that it provide a reasoned explanation for its action… The appropriate recourse is therefore to remand to [Department of Homeland Security] so that it may consider the problem anew.”

In short, President Trump could try again, though it is unclear whether he will actually attempt to relitigate the matter given the wide public support nationally for DACA recipients, or DREAMers.

Despite Trump’s claim that he’s still committed to ending DACA, The Hill reported on Friday that “the acting deputy secretary of Homeland Security, Ken Cuccinelli, said Trump ordered the agency to ‘restart the DACA process’ after the Supreme Court’s decision…”

Two civic groups have kicked off national campaigns to register throngs of new citizens ahead of the November general election.
About five million immigrants have become naturalized U.S. citizens since 2014, including 3.1 million who have acquired citizenship since President Trump took office.

The voter registration campaigns are being organized by “the National Partnership for New Americans (NPNA), a coalition of immigrant advocacy organizations, and the other from the Southern Law Poverty Center (SLPC), which monitors hate groups and extremist organizations,” according to NBC Latino.

A report released in March by Boundless, a company that helps immigrants obtain green cards, found that potentially hundreds of thousands of immigrants are being blocked from U.S. citizenship because federal authorities have stopped conducting in-person interviews and [swearing-in] ceremonies during the COVID-19 pandemic.

Vanguardia America is a free weekly newsletter. To sign up, email Editor and Publisher James E. Garcia at vanguardianews@gmail.com