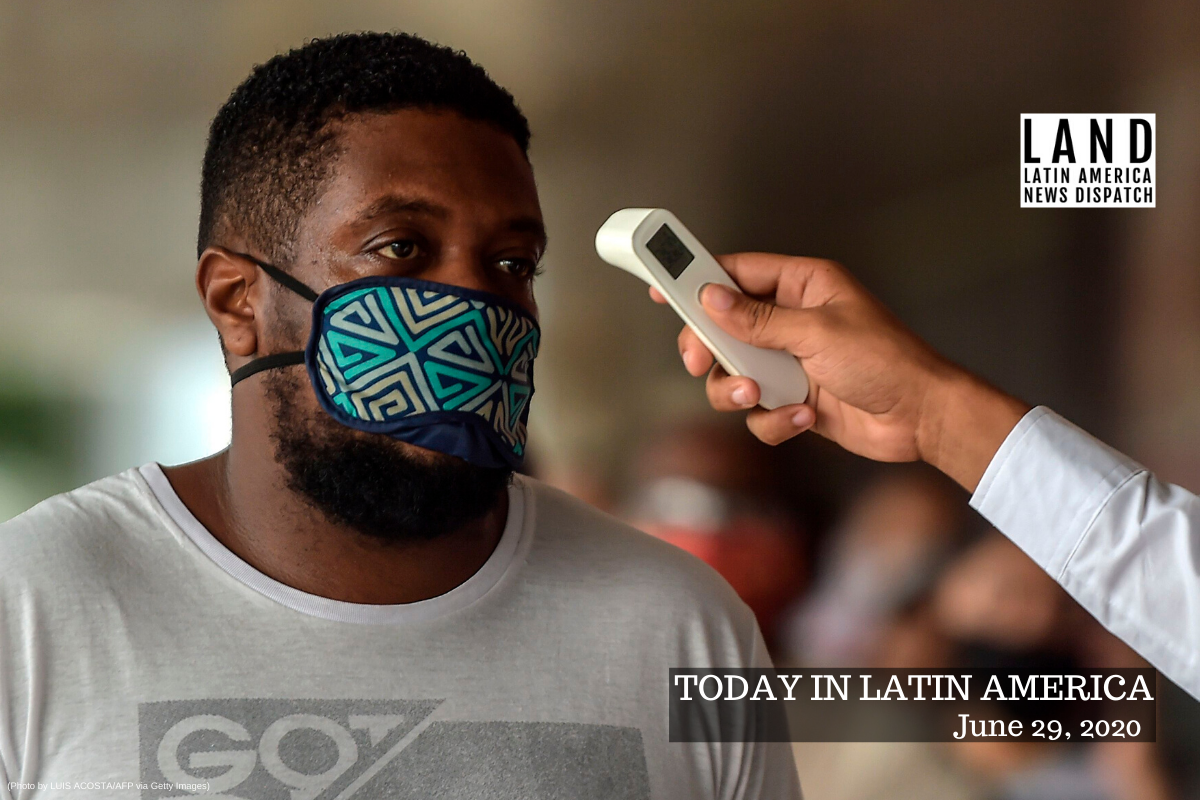 An employee of a supermarket checks the body temperature of costumers amid concern over the spread of the COVID-19 coronavirus, in Panama City, on June 1, 2020. (Photo by LUIS ACOSTA/AFP via Getty Images)

REGION: Coronavirus cases surpassed 10 million worldwide yesterday. Latin America is suffering from particularly high rates. Earlier this month, the Financial Times reported that the region accounted for half of the world’s deaths from COVID-19, even though it has only 8% of the world’s population. In the Western Hemisphere, the United States and Brazil have the highest number of cases, followed by Mexico.

After trying to contain the spread of the virus, many countries in the region are experiencing surges. Argentina has extended and tightened its lockdown after a recent increase in cases around Buenos Aires. Medical experts in Brazil say the spread of the virus in remote areas will likely bring it back to major cities for a second wave as people travel to urban areas for medical care. In Haiti, coronavirus cases increased 600% between mid-May and mid-June. Panama, which had previously kept new daily infections below 200, has seen that statistic almost triple this month as the country re-opened. And in Ecuador, the mayor of Quito said over the weekend that the city’s health services have reached their capacity for treating patients with COVID-19.

With no end to the pandemic in sight, Brazil has joined the race for a vaccine. On Saturday, the government signed a deal with Oxford University and AstraZeneca to produce 100 million vaccines. The vaccine is still being tested, and the first 30 million doses would not be available until December or January.

BRAZIL: The Brazilian newspaper Folha de S.Paulo began a pro-democracy campaign yesterday to combat what the paper warns could be a slide back into authoritarianism, led by President Jair Bolsonaro. Folha de S.Paulo is changing its motto to “a newspaper at the service of democracy” (from “a newspaper at the service of Brazil”) and is encouraging Brazilians to wear yellow to support the campaign. The paper also published a report from the polling institute Datafolha that Brazilian support for democracy has grown to 75%, up from 62% in December. The current number is the highest it has been since Datafolha began collecting this data in 1989.

BRAZIL: Illegal gold miners shot and killed two Yanomami men on their reservation in the Amazon earlier this month. The men approached a mining camp on June 12 to ask for food when they were attacked, the tribe said on Saturday. During Bolsonaro’s time in office, thousands of gold miners have illegally entered the Yanomami territory. Bolsonaro has done little to stop the invasion and claims Indigenous people want the development despite the fact that miners are polluting their rivers and bringing disease and sometimes violence.

VENEZUELA: On the one-year anniversary yesterday of the death of Venezuelan Navy captain Rafael Acosta Arévalo, his wife, Waleswka Perez de Acosta, demanded justice. Acosta was arrested a week before he died, and Perez said he was tortured by officers working for President Nicolás Maduro. Two National Guard officers were charged in Acosta’s death, but Perez said she was not allowed to attend the hearing and her husband’s body was buried without her consent.

PUERTO RICO: More than 51,000 Puerto Ricans are waiting for their first unemployment checks to arrive since the pandemic began, devastating the economy and putting thousands out of work. The unemployment rate on the island is 20.6%, the second highest rate in the United States. In February, before lockdown measures were put into place, the unemployment rate was 8.5%. Puerto Rico is slowly opening back up, and tourists are expected to be allowed again on July 15.

REGION-UNITED STATES: A U.S. State Department official announced Friday that the government will spend $252 million in aid to Guatemala, Honduras and El Salvador to try to stem the flow of migrants traveling to the country. The money is supposed to be used to create job opportunities and enhance public safety. The announcement comes as the United States uses the pandemic to crack down on who is allowed to enter the country, including those requesting asylum.

NICARAGUA: Last week, members of political groups opposed to President Daniel Ortega met in a hotel surrounded by police vehicles to discuss plans to unseat Ortega in the election next year. The usually divided groups united in the common goal of fighting for “justice, democracy and against the dictatorship.” The opposition coalition has been growing since the 2018 protests that left hundreds dead.

MEXICO: Mexico City’s chief of police was injured in an ambush on his vehicle Friday, and two of his bodyguards and a bystander were killed. Chief Omar García Harfuch, who said he was shot three times, blamed the attack on the Jalisco New Generation Cartel. The gunmen were carrying grenades, assault rifles and a sniper rifle. Mexican authorities are calling the attack an assassination attempt, and police launched a series of raids in response.

MEXICO-UNITED STATES: Mexican President Andrés Manuel López Obrador will visit U.S. President Donald Trump at the White House as early as this week to mark the beginning of the U.S.-Mexico-Canada Agreement, which will go into effect Wednesday. An official date for the visit hasn’t been announced, but a U.S. official confirmed last week that it would be in early July. The trip will be López Obrador’s first official trip abroad since he became president in December 2018.
GOT NEWS? Send the editors tips, articles and other items for inclusion in Today in Latin America to tips@latindispatch.com.
Subscribe to Today in Latin America by Email