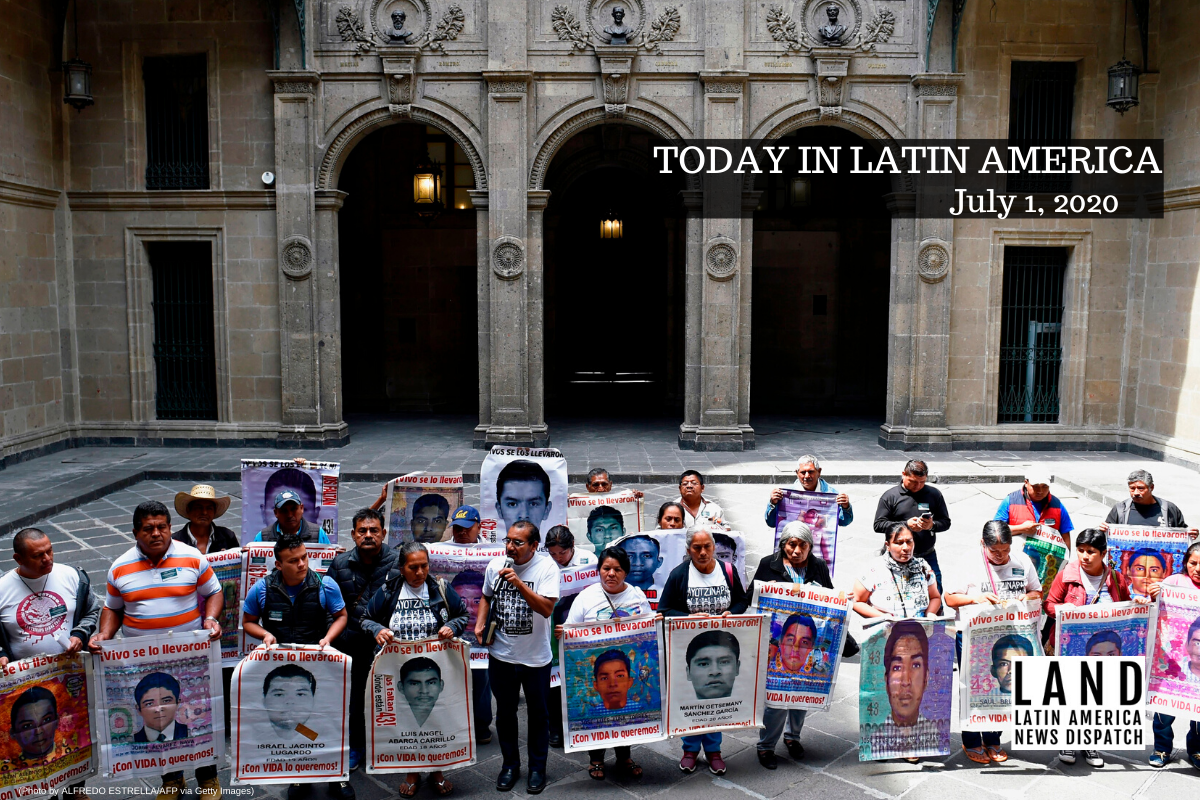 Relatives of the 43 missing students of the Ayotzinapa Rural Teachers' College speak during a press conference at Palacio Nacional, in Mexico City, on March 5, 2020. (Photo by ALFREDO ESTRELLA/AFP via Getty Images)

MEXICO: The attorney general announced yesterday that he requested arrest warrants for 46 officials in the reopened investigation into the disappearance of 43 Mexican students from Iguala, Guerrero in 2014. Alejandro Gertz Manero said many of these officials were arrested previously but then released during a faulty investigation. Prosecutors also announced on Monday that they arrested Ángel Casarrubias, a suspect who they believe is a member of the Guerreros Unidos gang.

Gertz also confirmed yesterday that Tomás Zerón, the former head of the Criminal Investigation Agency who oversaw the first investigation, has fled Mexico. A warrant for Zerón’s arrest was issued in March. Zerón concluded in the original investigation, that police fired on the students as they traveled in a bus from Iguala to Ayotzinapa, and then handed them over to Guerreros Unidos. Officials today say that the investigation was full of errors. Zerón has been accused of torturing suspects and manipulating evidence in the case.

The director of the Pan American Health Organization said yesterday that more than 400,000 people in Latin America and the Caribbean could die from COVID-19 between now and October. Director Carissa Etienne said the number of cases in some countries, like Chile and Colombia, will peak within the next 15 days. Others, like Costa Rica, will not reach the peak until October. More than 500,000 people in the world have died from the virus. In Latin America, the crisis deepens.

VENEZUELA: On Monday, the European Union imposed sanctions on 11 Venezuelan officials, including legislator Luis Parra, the head of the National Assembly opposed to Juan Guaidó’s opposition assembly. In response, Nicolás Maduro gave the EU envoy in Venezuela 72 hours to leave the country. The EU said it would comply. Europe has now targeted a total of 36 Venezuelan officials with sanctions.

GUYANA: The Caribbean Court of Justice is expected to rule today on the disputed outcome of Guyana’s March 2 presidential election, though questions remain about whether the court has jurisdiction to hear the case. Incumbent President David Granger claimed victory in the March election, but a recount last month showed that the opposition candidate Irfaan Ali won. Neither has conceded. The stakes are particularly high in this election as Guyana is on the cusp of an oil boom.

PUERTO RICO: Gov. Wanda Vázquez Garced issued an executive order yesterday requiring anyone flying into Puerto Rico to present proof they tested negative for the coronavirus. If they do not, they will have to quarantine until they get negative results. Travelers who arrive without results can be tested at the airport. The order, which also requires airplane passengers to wear masks, goes into effect July 15. Read the whole list of new requirements here.

TRINIDAD & TOBAGO: People protested in Trinidad and Tobago yesterday after police shot to death three men on Saturday. Several businesses in the capital, Port of Spain, closed in response, and there are reports that police have shot protesters. Police said that one of the three men shot over the weekend had drawn a firearm, but video footage shows the men with their hands up.

GUATEMALA: The Miami Herald reported yesterday that Guatemala began limiting the number of people the United States can deport each week to prevent the spread of COVID-19. The cap on deportations went into effect about three weeks ago. A spokesperson for Guatemala’s foreign ministry told the Herald that there are now only two deportation flights a week with a maximum of 50 people on each. In May, President Alejandro Giammattei accused the United States of not acting like an ally in sending deportees back during the pandemic. At the time, the United States had already deported 119 Guatemalans who tested positive for the virus.

U.S.-MEXICO BORDER: Three asylum seekers living in a tent camp at the U.S.-Mexico border tested positive for COVID-19, marking the first confirmed cases at the camp in Matamoros. Global Response Management, a nonprofit organization providing medical services in the camp, said they are testing and isolating others who came into contact with the migrants. Around 2,000 people live in the camp in tight quarters, creating ideal conditions for the virus to spread. A reporter from El Faro visited the camp in May and said social distancing was impossible as people crowded into shacks and shared just 100 bathrooms.

MEXICO: Emilio Lozoya, the former head of Mexico’s state oil company Pemex, said he will return to Mexico to cooperate with a corruption investigation. Lozoya was arrested in Spain in February and had been fighting his extradition to Mexico. He is charged with tax fraud and bribery for allegedly receiving bribes for the purchase of a fertilizer plant. The investigation into Lozoya was part of a probe into the Odebrecht corruption scandal.