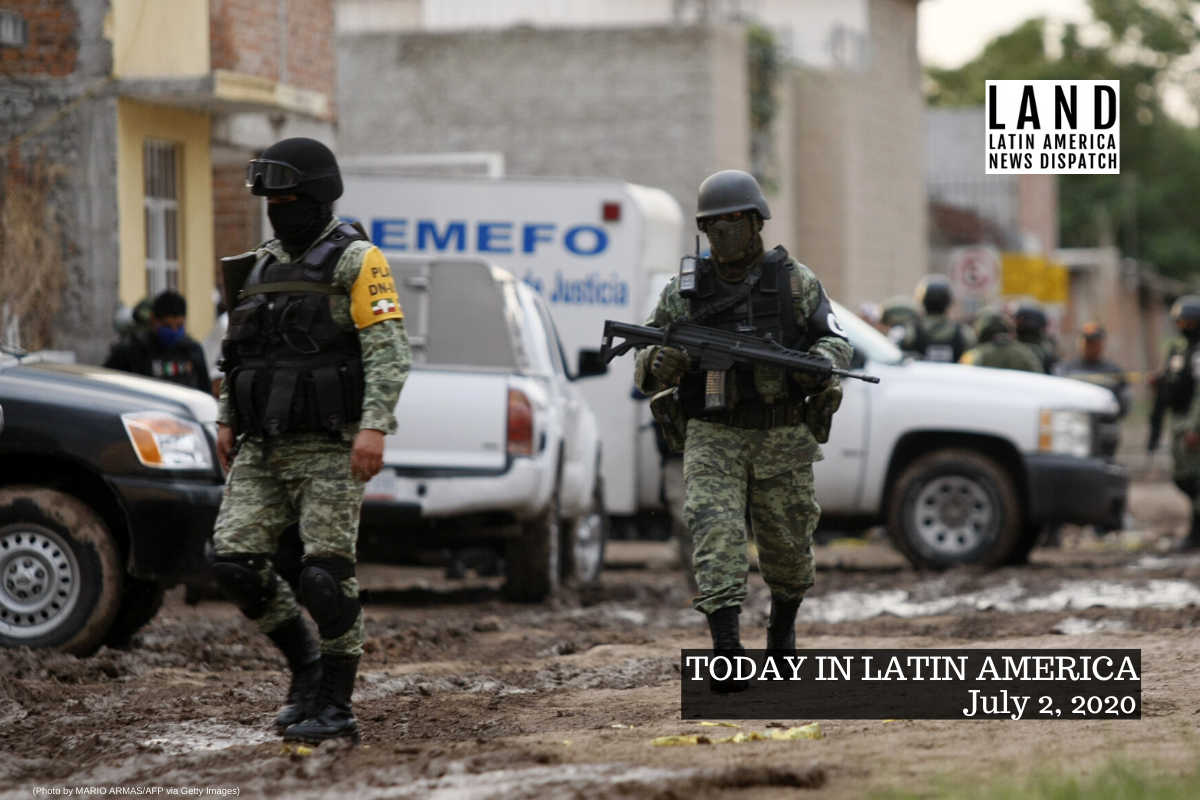 Members of the National Guard walk near the crime scene where 24 people were killed in Irapuato, Guanajuato state, Mexico, on July 1, 2020. (Photo by MARIO ARMAS/AFP via Getty Images)

MEXICO: 24 people are reported dead and seven injured after a mass shooting in a rehabilitation center in Irapuato, Guanajuato, Mexico. Local authorities say that the attack was perpetrated by a group of men who arrived at the center in a red van. No arrests have been made. The state of Guanajuato has seen an increase in crime in the past few years, mostly due to the presence of rivaling gangs in the area. Since May, three other mass shootings have been reported in Guanajuato, including one which left 10 people in another rehabilitation center dead.

The shooting occurred on the anniversary of President Andrés Manuel López Obrador’s second year in office. Despite promises from the President to reduce crime rates, his administration is currently facing nearly 3,000 homicides per month, a number which has significantly grown in recent years. Several states continue to report higher rates of homicide than in years past, leaving experts worried that 2020 may be Mexico’s most violent year to date.

BRAZIL: The Ministry of Health reported that 90% of Brazilian cities now have reported COVID-19 cases. Of the cities currently facing COVID-19 infections, nearly half of them have reported deaths. Although health officials have assured that the number of cases and deaths due to the pandemic is stabilizing, authorities reported 1,057 deaths on Wednesday. The country surpassed 60,000 total deaths, and there are nearly 1.5 million confirmed cases.

COLOMBIA: A week after seven soldiers pleaded guilty to sexually assaulting a 12-year-old indigenous girl, officials confirmed that 118 soldiers are currently being investigated for sexual abuse of minors. General Edward Zapaterio said in a virtual news conference that the army has “zero tolerance” for sexual abuse, despite more than 70 soldiers within the investigation still being active in the line of duty. The Colombian Army has been accused of human rights violations for decades, with studies indicating that thousands of civilians have been killed by armed forces.

VENEZUELA: Congressional elections will officially be held on December 6 for members of the legislative body. Opposition leaders have accused President Nicolás Maduro’s administration of corruption and interruption of the voting process, leaving many to decide whether or not they will participate in the elections. The Supreme Court created a new elections committee, and ruled that voting registration will begin this month. Candidates can campaign from October until December 5.

DOMINICAN REPUBLIC: President Danilo Medina lifted the country’s state of emergency after three months of lockdown. A nationwide curfew also ended on Sunday, in addition to a series of measures put in place to limit the spread of COVID-19. The Dominican Republic currently has 33,387 confirmed cases of coronavirus and 754 deaths.

PUERTO RICO: The House of Representatives opened an investigation into 14 people tied to Governor Wanda Vázquez’s executive branch. The investigation was prompted by inquiries into purchases made by the government amidst the pandemic. Internal fighting between representatives in the past has led to what officials deem “flawed investigations” into executive affairs on the island, including the discovery of unused supplies meant to aid those affected by Hurricane Maria. The investigation comes as Puerto Rico faces an economic crisis due to decades of mismanagement of funds.

HONDURAS: Two men suspected of killing journalist German Vallecillo were arrested on Wednesday. Vallecillo and the cameraman he was working with, Jorge Pozas, were shot to death yesterday while reporting after gunmen in a vehicle stopped and opened fire across the street. Five people in total were arrested in relation to the crime, though there is no known motive in the crime. The Honduran Association of Journalists has stated that 86 media related deaths have occurred since 2001, with only seven of them resulting in prosecutions.

MEXICO: Aeromexico has joined a growing number of airlines filing for bankruptcy due to the pandemic. It is the third airline from Latin America to do so. Daily operations are expected to continue during the financial crisis, with the airline citing plans to expand its services soon. Experts say that many more Latin American airlines could soon be affected by the pandemic, which will result in higher ticket prices and a less competitive market.

REGION-UNITED STATES: A federal judge blocked a policy that would ban most asylum seekers from Central America from requesting asylum at the U.S.-Mexico border. The policy would require migrants to attempt to seek asylum in another country before the United States. The judge ruled that the policy violates the Immigration and Nationality Act, which allows anyone who arrives in the United States to apply for asylum. Since the beginning of the pandemic, the Trump administration has restricted asylum and crossings at the southern border. More than 43,000 migrants are currently being forced to wait for their hearings in Mexico, leaving many unable to apply for asylum at all.